Monsieur Hulot curiously wanders around a high- tech Paris, parallelling a trip of a group of American tourists. Stunning visuals and clever use of sound effects (the film has nearly no dialogue). Considered by many to be Tati's masterpiece. 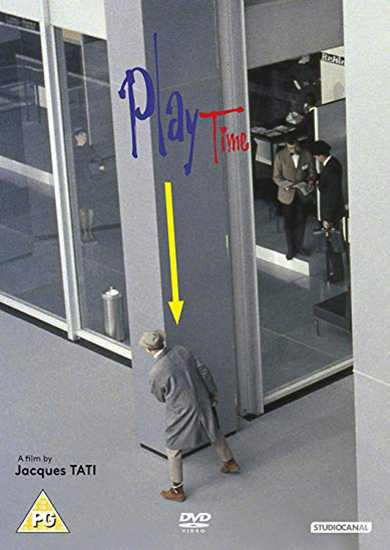 Jacques Tati’s ‘Playtime’ is one of a kind, complete in itself. M. Hulot, Jacques Tati’s alter-ego, seems to be wandering through it by accident. Instead of a plot, it has a cascade of incidents; instead of central characters, it has a cast of hundreds; instead of being a comedy, it is a wondrous act of observation. It is a film-maker showing us how his mind processes the world around him. Tati made ‘Playtime’ without a story, with dialogue (mostly in English) that is inaudible or disposable, and without a hero. His film is about how humans wander baffled yet hopeful through impersonal cities and sterile architecture. Tati shot the film entirely in medium and long shots; no close-ups, no reaction shots, no over the shoulder. The film directs us to look around the world we live in and at each other and see how funny it is. Some characters stand out more than others. Hulot, of course; an attractive American woman; a kind American man; a long-suffering restaurant owner; a very drunk man. But scenes don’t centre on them; everyone swims with the tide. ‘Playtime’ is a peculiar, mysterious, magical film: detailed, delicate, whimsical, with its own kind of imaginative recklessness.
Roger Ebert Great Movies 2004
‘Playtime’ is a gloriously funny film about a Paris so modern it does not yet exist; a Paris hemmed in by efficiently beautiful glass and steel towers, in which we see momentary reflections of the Arc de Triomphe or the Eiffel Tower. It is Tati’s most free-form comedy to date, with virtually three major set-pieces. The first is set at Orly airport, where we see American tourists arrive; the second is more or less devoted to a trade fair; the third is in a posh night club whose opening night turns into the sort of chaos that civilises. The shape of the film is recognisable, a variation on the comedy theme of a family that inherits a lot of money, puts on fancy airs, loses its soul and only finds it again when the fortune is taken away. Although M. Hulot is the major focal point for the comedy and the source of its immense good humour, the film observes not persons but social clusters, in a manner to humanise group action and response. The film’s cheerful philosophy is the key to its appeal, the density of its wit and the gracefulness of the visual gags that flow into one another, non-stop, in a manner that only Tati has mastered.
Vincent Canby New York Times 1973

What you thought about Playtime

“Playtime” by Jacques Tati could be said to be a film of its time (1967) – as well as an attempt to look forward to the modern age. As one member put it, “it must have been exciting for people at the time”. “How things have changed since 1967” said another. The film did make a strong and varied impression upon the membership. Many remarked on it being a “light hearted and fun” film as well as “wonderfully inventive!” “Wonderful observations of humanity” and “humour of the highest quality – all within one’s experience!” Another remarked on its “intelligent madness. Fun to anticipate the next visual happening.” Another said “the colour, noise and composition were all artistic. Ideas – bonkers but interesting. It was as though I was in someone’s dream.” Others remarked on the “fascinating costumes and décor” and “very clever and beautifully coloured” and “attention to every detail”. Also the score: “lovely cheerful and jazzy music”. One member was mesmerised by the “amazing attention to detail. So many things happening on the screen all the time.” A member said that “the broken door in the restaurant raised a smile” and - despite one viewer’s “very slow first half” it then was “redeemed by a hilarious restaurant scene” whilst another remarked that the “the party was a triumph”. Others found it to be too “chaotic” and noisy. Another said “there was too much going on altogether (and too loudly).” One observed that the film contained “many classic bits, some excellent visual jokes and a remarkably rich canvas. But some were overworked and I was bored on occasion.” Another commented: “very long, very boring, disjointed and not very funny.” “A masterpiece of observation” said one viewer, but at the same time, many members agreed that it was “indulgent”: “elements of giggle amongst a mass of sleepy self indulgence” was one person’s whimsical summation. Another said “the most boring and self-indulgent film put on by GFS”. Indeed, the overwhelming response from most of the members who rated it average or below (even from some who rated it more highly) was to remark on the length of the film – “some amusing moments but much too drawn out”, “overlong, not funny until the restaurant scene”, “far too long to wait for the odd usual joke – AND repetitive!”, and finally - and most damning for Tati - “a waste of six years!” As one member put it, “a fun tale on the absurdities of modern life” and another said “still so funny – timeless – good way to end the term!” One viewer said that “the final 20 minutes showing Paris at its best were worth waiting for.” All in all, one could safely say “a mixed bag!” to round off the first half of the film season.