Story of a council case worker (Eddie Marsan) who looks for the relatives of those found dead and alone. Poignant, quixotic tale of life, love and the afterlife. 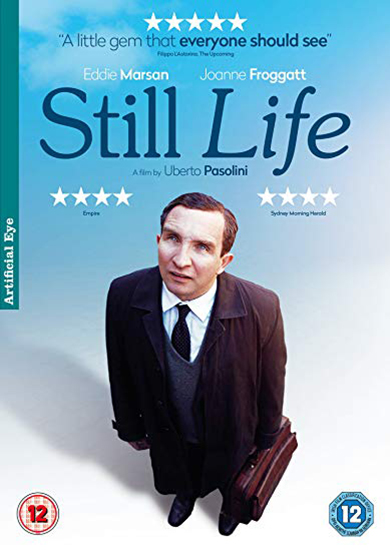 This sensitive low-key drama opens with a series of diverse funerals. At each one, the only person in attendance is John May (Eddie Marsan), a lonely council worker who organises the burial service whenever someone in his borough dies alone. Doing much more than the job requires, John is unusually meticulous and thorough, acting as a detective of sorts by tracking down any friends or relatives who might wish to pay their respects to the deceased. After being made redundant, he persuades his boss to let him finish one final case, which centres on a hot-tempered alcoholic who recently passed away. The story that follows is sombre and understated to a fault. As he carries out his final assignment, he gains fresh inspiration from a friendship with the dead man’s daughter and learning about her father’s fascinating life. Events as they unfold contain several quietly affecting moments, most of which are complemented by a beautiful score by Rachel Portman. The real reason to watch, and at the heart of this original and humane film, is the performance of Eddie Marsan, who provides a typically impressive lead role.
Stephen Carty Radio Times 2014
The quiet and contemplative ‘Still Life’ casts Eddie Marsan in the leading role of John May, a Kensington-based funeral officer for Lambeth council, whose job it is to arrange the services for those who die alone and have no relatives. John is a man who takes his job very seriously. His sense of pride in his work leads him to go to great lengths in honouring the departed. When John learns he is to be made redundant after 22 years of service, it gives him a new lease of life. He decides to put all his efforts into investigating his final case, which takes him across the country on a journey of discovery. The director, Uberto Pasolini, has created a potent and poignant exploration of love and death, solitude and the breakdown of community. The static images of London life are filled with a haunting familiarity. The film feels deeply sincere and Marsan is perfectly cast as John, conveying kindness and naivety in an entirely convincing, understated manner.
Katherine McLaughlin The List February 2015

What you thought about Still Life

The virtually universal appreciation of a “warm, sincere, humane and deeply touching story” was the main theme in almost all the responses. There was no doubt about the film’s “emotional impact”, “its quiet dignity”, “its deep pathos” and its “celebration of the value of everyday life”. There was no doubt also about the film’s “sombre subject and down-to-earth treatment” of “loneliness, isolation, alienation and breakdown”. Over and over again the words “moving” and “poignant” appeared in the audience’s responses, together with the “subtlety and thoughtfulness” of the director and the cinematography which “created a consistent visual and emotional landscape”. One viewer found “great sadness” in the “mirroring” of the central character’s life and “the human investigations of the deaths of those who died forgotten and neglected.” Several members were pleased to have “an original, thoughtful and sensitive view of a taboo subject” and welcomed the film’s “profundity on many levels”. It was, for one member “a beautiful balance and portrayal of opposites – a classic example of how less is more”. The film was perceived to have “great tenderness for and sincerity in its treatment of its subject” and “beautifully observed both in location and character”. There was also great praise for Eddie Marsan as the central character, John May, “whose honesty, dignity and commitment drove the film”. Many of the responses chose words like “perfect”, “masterly”, “a masterpiece”, “brilliant”, “subtle” and “totally convincing” to describe Eddie Marsan’s performance “which resonated with reality, from lonely meals to his tidy desk”. Marsan’s “attention to detail and captivating expressiveness” were widely admired for both “compassion and understanding”. Many of you found “the exquisite musical score” the “perfect accompaniment to the themes and feelings of the film” and felt that it gave “a co-ordination and completeness to it”. Altogether, said one member “beautifully filmed – very English – unbearably sad”. Some comments wished the ending had been different and “kinder to the feelings” but many others commented on the “most moving concluding shot of spirits of the dead around John May’s grave”. There were one or two who felt that the film was “too long drawn out and too slow” but overall the film was, as the statistics show, one of the most appreciated of the season so far. There was a handful of references to the short, “Checkmate”, all positive and recognising the tension created and the sting in the tail.