Intriguing and unusual animation about a dog! 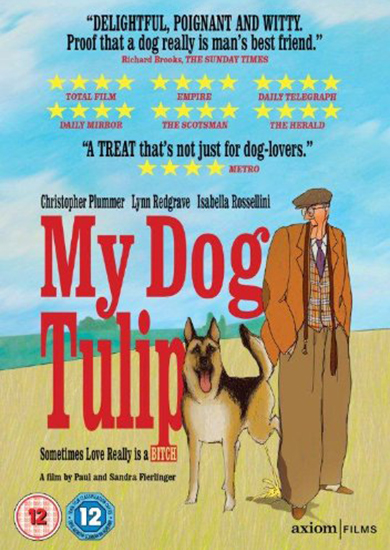 J R Ackerley’s ‘My Dog Tulip’ was published in 1956 and has now been made into an exquisite animated film by the American husband and wife team Paul and Sandra Fierlinger. This labour of love, narrated by Christopher Plummer as Ackerley, largely uses the original text to describe the author’s eight years with Tulip, the closest, most perfect of friends he’s ever had and his discovery that dogs have quite different identities from humans. The joint directors combine essential elements in achieving realism and avoiding sentimental anthropomorphism. With surprising accuracy, they capture that far-off Britain of the 1950’s, using a subdued palette and gentle line that draw on the British life of the period. One thinks especially of the book illustrator Edward Ardizzone who, along with Lucien Freud, did the illustrations for the original book. The Fierlingers also match Ackerley’s wit in the way they switch between fully realised graphic work for the realistic sections and rapid sketches for his flights of fancy. A classic book, a film to cherish.
Philip French The Observer 2013
‘My Dog Tulip’ is an animated dog movie like no other. The film distills with an elegant succinctness, the bond between human and pet when the human is a lonely gay man who has all but given up on finding the long-time companion that the narrator calls his ‘ideal friend’. That narrator, voiced by Christopher Plummer, is J R Ackerley, a British man of letters, whose 1956 memoir ‘My Dog Tulip’ chronicles his 15 year relationship with Queenie, a German Shepherd re-named Tulip for the book. This slender volume is a classic of animal literature for its refined prose, its dry wit and its close unblinking attention to the subtleties of human-animal interaction. The film’s hand-drawn animations combine with Christopher Plummer’s understated conversational voice and an agreeable light jazz score to create a sophisticated and moving film. ‘My Dog Tulip’ is peopled with eccentrics, each given an astutely chosen actor and a sharply drawn personality by the animators. In a final printed statement rolled across the screen, Ackerley contemplates a dog’s frustration at trying to understand the human mind. As his imagination soars, he wonders if, thousands of years ago, humans came under the protection of dogs, which tried to tame them and failed.
Stephen Holden The New York Times 2010

What you thought about My Dog Tulip

Responses to ‘My Dog Tulip’ Screened on 19th January 2016 Scores: Excellent 6 Good 15 Average 5 Poor 4 Total no. Responses: 30 ‘My Dog Tulip’ was preceded by the first screening of the short ‘The Burning’ that has been written, produced and directed by students from Farnborough College under the guidance of Dominic Lees – a member of GFS – and financial support from, among others, GFS! The result was a film of a professional standard with excellent cinematographic content. We wish the project team the best of luck as they seek screenings at film festivals. ‘My Dog Tulip’ appealed to two groups – not necessarily distinct - within our audience: those who valued the artistic merits of the graphical and musical content and those who could identify with the man - dog relationship that was portrayed. “Really taken with the quality of the animation; beautiful drawing and painting. Captured the language of the human and canine participants; 50’s images and atmosphere a joy; beautiful animation, beautifully drawn; fantastic drawings; clever mix of graphic styles; excellent animation and music; loved the artwork and the music; very like Japanese ‘anime’.” “Interesting interpretation of love between man and dog; well observed; charming and touching story; gentle, perceptive, humorous; many comic and imaginative touches; lovely, charming film; great story – must buy the book; good contrast to ‘The Burning’; as a dog owner, I laughed until I cried; as a dog owner I found the film very entertaining and some of it reminded me of incidents we have experienced; very close to home! on second viewing – found new insights and twists; good – but difficult to classify! Shades of Alan Bennett.” And then there was a third group who, whilst not necessarily dismissing the high quality of the animation, were unimpressed by the subject matter and, particularly, the length of the film. Too much sex! Too much piddling and ‘pooing’! Too much toilet humour! Too long; too drawn out; should have been a short! Exceedingly tedious – a 15 minute idea stretched beyond breaking point; subject matter and story dull in the extreme; laboured; hard work following the commentary through the loud music.” There was a feeling for some that the film was intended for a particular audience: “A film for dog lovers of which … I am not one! Not interested in dogs!” … and for some of us who, perhaps, have endured less than well managed canine neighbours, “The barking was annoying”!