Brilliant portrayal of life under an extreme Sharia regime. A Malian cattleman and his family face the wrath of Islamic fundamentalists after a tragic accident. 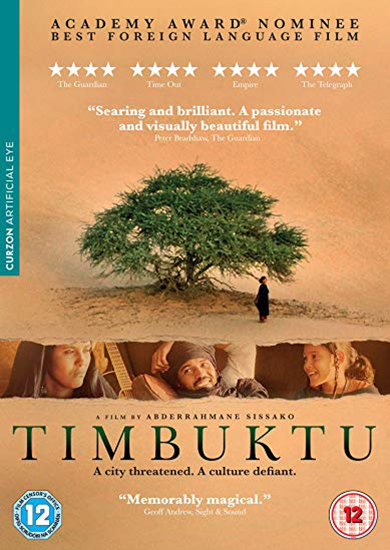 One of the sweetest shots in ‘Timbuktu’, a film necessarily short on whimsy, shows a football bouncing down a flight of steps, apparently of its own accord. The ball finds its way into the possession of an armed man, who then enquires of a passer-by whether it belongs to him. The fellow holds his hands up as though denying ownership of an incriminating weapon. As well he might. The city is in the grip of fundamentalists who have added football to the list of activities punishable by public lashing or worse. The film doesn’t explain anything beyond the bare bones of its central scenario. Characters come and go; a young jihadist dithers when asked to renounce his old hip-hop life; a hostage is handed from one group of bandits to another; a driver tries to protect the married woman to whom his boss is making overtures. This is a film in which small pieces stand in for a daunting and horrifying whole. What the director achieves through the gradual accretion of the quotidian detail, is what it means if a city has fallen to Islamic State or the Taliban have extended their reach. A biker proclaims a new law through a loudhailer – a woman must wear socks and gloves at all times! ‘Timbuktu’ is tangential in its horrors, thanks to a deft screenplay and nimble editing. At the centre of the story is Kidane who has avoided trouble by staying with his family in their encampment in the sand dunes. Eventually, through a tragic accident, Kidane is forced to enter the city and finds himself at the mercy of a higgledy-piggledy court dishing out arbitrary punishments. One of the town’s leaders looks on and asks the jihadists “Where is God in all this?” His question echoes through the film. Kidane gives up on earthly justice and tells his wife he believes God will know what is right. The film resists this interpretation and leaves us with feeling that the action of the film is still going on – which of course it is.
Ryan Gilbey New Statesman 2015
In the hands of a master, indignation and tragedy can be rendered with clarity, setting hysteria aside for deeper, more richly shaded tones. Abderrahmane Sissako is such a master. ‘Timbuktu’ confirms his status as one of the true humanists of recent cinema. Set in the early days of jihadist takeover of northern Mali in 2012, the film is a stunningly shot condemnation of intolerance and its annihilation of diversity. A goat and cattle herder, Kidane is the proud father of Toya and guardian of orphan Issan who, while driving the herd to water, loses control of his charges and a prize cow gets caught in the nets of a fisherman. Furious, the fisherman spears the beast; Kidane arrives, carrying a pistol merely as a threat; a struggle makes the pistol discharge and the fisherman is killed. Punishment is swift, not just for Kidane, but for the others who have transgressed the fundamentalists’ interpretation of sharia law. Soldiers arrest four people for making music, subjecting the singers to 40 lashes. “We are the guardians of all deeds” says a jihadist, thereby dismissing any attempt at freedom of expression and movement. It is part of the power of ‘Timbuktu’ that it endows its characters with pride and love and respects their humanity. The women, in particular, are wise, forceful presences, far too often the victims of men’s headstrong impulsiveness. The performances throughout are mesmeric and the director’s unfailing sense of colour holds the eye. The music, with its combination of traditional Malian melodies and western orchestral accompaniment, is beautifully suited to the images.
Jay Weissberg Variety 2014

What you thought about Timbuktu

This was a difficult film to absorb and evaluate. The issues it raises are contemporary, shocking and hopefully outside the experience of the GFS audience – but clearly not unfamiliar to those forced to live with the consequences of extremism and unbridled power in all of its forms. The film attracted a great deal of positive comment: “Lovely cinematography; brilliant; powerful; atmospheric; dignified; a beautiful, well made film; surreally beautiful African music will haunt me; the filming of the landscape was masterful; fabulous photography; shatteringly brutal but perfectly portrayed; loved the photogenic faces; evocative colour palette; more like a documentary; each scene an individual painting; surprisingly cohesive despite the fragmentary approach.” Clearly, the story was disturbing and all the more uncomfortable because it gave credence to what we have learned from the media: “Shocking; so sad; now I have a better understanding of how people live under such absurd ‘laws’; hard to believe that it happens this way; an insight into a closed, brutal world; not fully explained but drew me in.” Many of you felt an emotional involvement that probably took you by surprise: “A disturbing experience; depressing to feel how hopeless it is to reason with such minds; the audience reaction when the film finished said it all: subdued, astonished – a little shell shocked; confirmed my worst fears of a jihadist regime; seemed frighteningly realistic; so, so sad – and hopeless; how can people do such things; the opening scene said it all; A DISTOPIAN NIGHTMARE; showed the dignity of people trapped in a dreadful situation; a way of life being destroyed; heart-breaking – an existence that I cannot comprehend or ever want to experience; Sad reflection on how Sharia law can be enforced. The most upsetting film / One of the most moving films I have ever seen! Filled me with sadness; atrocities committed in the name of religion seems to be unending; the fantasy football brought tears to my eye!” It was Interesting that the contrast of mud houses and tents with 4x4’s and mobile phones (and Kalashnikovs!) said as much about the impact of the global economy on a way of life as it did about religious extremism. For some the film was a re-statement of familiar norms: “About men abusing women; about power and corruption; about hypocrisy; a clever film – subtly propagandist” “Amazing that such a film can be made (by a Muslim) and shown to Western audiences; how true a representation is the film? If it is, surprising that the ‘nasties’ allowed it to happen!” Final points: For a number of you the film was: ‘Too slow; too long.’ Quite a few of you “Didn’t understand the ending” and for one member:” I want to see it again!” John O’Keefe 28 January 2016