The Night of the Hunter

Robert Mitchum plays a tattooed travelling preacher man who marries a gullible widow whose young children are reluctant to tell him where their father hid $10,000 he'd stolen in a robbery. Actor Charles Laughton's only directed film, a classic thriller. Atmospheric & riveting. 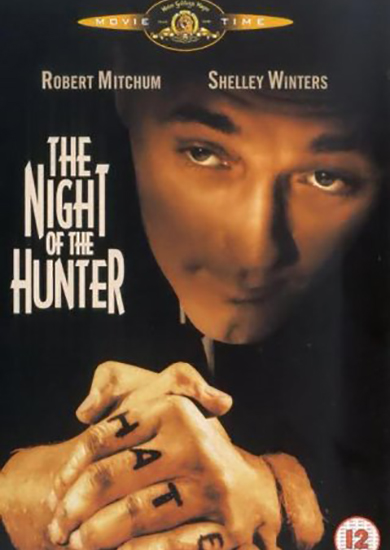 This classic has been beautifully restored to life, successfully mixing lightness and humour in a dark film that would even have Frankenstein’s monster running for cover. There is a timeless, sinister malevolence at the heart of this restored, all-American movie directed, in 1955, by the brilliant British actor, Charles Laughton. ‘The Night of the Hunter’ was so far ahead of its time when released that few critics respected its power and it duly became such a financial disaster that Laughton was never trusted to direct again. Yet here is a man who truly understood the power and potential of cinema. ‘The Night of the Hunter’ is replete with an extraordinary range of visual ideas. They lace together a multi-faceted plot, dominated by the shockingly manipulative ‘preacher’ Harry Powell (Robert Mitchum). He is after the money that only two young children know about following the hanging of their father. And he will seemingly stop at nothing to get it. With ‘Love’ and ‘Hate’ tattooed on his vast knuckles, this is a career best performance from the great Robert Mitchum.
Graham Young Manchester Evening News 2014
Charles Laughton’s ‘The Night of the Hunter’ is one of the greatest of all American films but has never received the attention it deserves. Yet what a compelling, frightening and beautiful film it is! And how well it has survived its period. By setting his film in an invented movie world outside conventional realism, Laughton gave it a timelessness. At the heart of the film is the Mitchum character, the sinister ‘Reverend’ Harry Powell, with the knuckles of his two hands, with ‘Love’ and ‘Hate’ tattooed upon them. It is one of the most frightening of movies, with one of the most unforgettable of villains and, on both these scores, it holds up, after more than five decades. The film is full of remarkable images (the children fleeing down the dream-river while the preacher follows them on shore; the street lamp casting Mitchum’s terrifying shadow on the walls of the children’s bedroom) which give the film the logic and power of nightmare. Mitchum, one of the great icons of 20th century cinema, is uncannily right for the role, with his long face, gravel voice and silky tones of the snake-oil salesman. Shelley Winters (the children’s mother) and Lillian Gish give compelling and convincing portrayals. Charles Laughton, as director, stretched the conventions of the time, but it was a risky cinematic venture. But nobody who has seen ‘The Night of the Hunter’ has ever forgotten it, or Mitchum’s voice, coiling down those basement stairs.
Roger Ebert Great Movies

What you thought about The Night of the Hunter

There was an enthusiastic and thoughtful response to Charles Laughton’s only directional venture and its “sinister tension” and “menacing dramatic pace” For the great majority in the audience, there was no doubt that the fifty-year old classic held its cinematic power: “very tense and kept me on the edge of my seat”; “nightmarish sequences with an inexorable trend of darkness”. This was a film with a “remarkably sustained atmosphere”, “an almost mesmeric portrayal of the power of evil”, a film “composed of frightening dark shadows and silhouettes”. The “pervading sense of menace” was achieved by the “innovative use of light and dark, the adventurous camera work, far ahead of its time”. There was recognition, too, of the “remarkable originality” of the film, in the way it dramatised the preacher’s “sinister evil” and the “determined innocence” of the two children. Of note, too, for some viewers, was the “sinister and frightening religious gullibility” whereby Harry Powell was able to dominate and manipulate almost all with whom he came into contact. There was no avoiding the sense of melodrama for some in the audience but “the dark images lingered and gave the film and its characters a compelling quality.” Robert Mitchum’s performance as the preacher was seen as “a masterly depiction of manipulative and corrupt intelligence”, employing “a highly skilful range of verbal and visual techniques” to portray “a controlling evil, mask-like in its ability to deceive”. For several in the audience “his face and its shadows” summed up the power of the film. A number in the audience also noted the contribution of the children to the film’s portrayal of “innocence threatened by evil”, the role of Shelley Winters as the mother/wife and Lillian Gish as “restorative goodness”, to conclude that it was a film “rich in high quality screen acting” and thus another tribute to Charles Laughton as the director. Praise was not, of course, universal. Some felt the film was too long and “lost its way towards the end”. The lynch-mob sequence was “over the top” and some of the scripted dialogue was “stilted and lacked authenticity”. The plot was “clunky” at times and the “overt symbolism” “adventurous for its time but failed with a current audience”. For one member, the film mixed “a sentimental moral message with an accompanying menace but didn’t make sense of both”. It was, for a number, “very dated and very predictable – an antique rather than a masterpiece” and for another “overly theatrical, with often wooden acting, direction and screenplay – it hasn’t worn well!” However, for the great majority the film was “powerful and worthwhile”, a very good choice for the “classics” slot in the season’s programme” and “just the thing a film society should offer”. There were, in addition, a dozen references to the short “Lost Property”, all of which praised its style, humour and sensitivity.