Black & white film about an 18 year old novitiate in 1962 Communist Poland, who journeys to see her sole surviving relative before taking her vows, and uncovers a dramatic family secret. Oscar winner 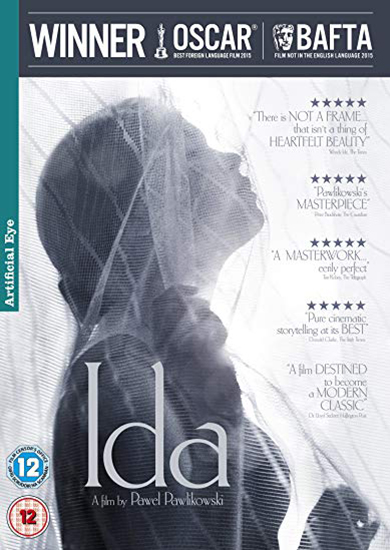 This eerily beautiful black-and-white film is one of the outstanding movies on general release after the festival season. Set in the 1960s, it looks and feels like a restored and rediscovered classic. ‘Ida’ delivers its anger and pain with a new intensity. There is a bitter winter cold here, illuminated by the stark day-lit whiteness of the snow. It is 1962 and Anna is about to take her final vows in the convent where she was left as an orphan in 1945, by persons unknown. Anna has one surviving relative and the Mother Superior insists she contact this woman before she makes an irrevocable decision. The relative turns out to be her aunt, a worldly, hard-drinking woman who lives on her own but who is actually a magistrate and a state zealot. Boozy Wanda reveals that Anna’s name was originally Ida Lebenstein and she is Jewish. Wanda proposes that they go on a road trip together to discover what happened to Ida’s parents during the war. This is a journey into the heart of Poland’s church and state, into its Catholicism and anti-Semitism. ‘Ida’ is a compelling film that achieves a great deal in a short time. The performances are superb and the sense of location and period miraculous.
Peter Bradshaw The Guardian 2014
The great new Polish film ‘Ida’ shocks by its expressive use of silence and portraiture and its fervent austerity. This compact masterpiece has the definition and finality of a reckoning – a reckoning in which anger and mourning blend together. Set in 1961, during the Stalinist regime in Poland, the film probes into the past of the war years and their aftermath. Anna, a novitiate, is ordered by her Mother Superior to visit her aunt before she takes orders. Anna is beautiful, composed, devotional and has never left the convent. Her aunt, Wanda, is a minor state judge and communist party member; Ida’s mother was her beloved sister. The two agree to go to the village in which the Jewish parents were hidden and then betrayed. ‘Ida’ becomes an investigation, with a dialectically-opposed odd couple; Catholic and Communist; innocent girl and hard-living intellectual. Yet neither is a type. Ida’s faith and simplicity will be jostled by experience and Wanda will be tested too by her own buried sorrows. There are currents of emotion, which electrify the women’s relationship with each other. ‘Ida’ is a story of identity and it’s a spiritual journey too. Pawlikowski has made a meditative film, concentrated and expansive at the same time, which breathes the complexity of history in every frame.
David Denby New York Times May 2014

What you thought about Ida

Another well attended film and a good number of responses. By far the majority of you enjoyed an intriguing film that provoked careful consideration of both its content and the manner of its presentation. The adjectives used in the responses convey the essence of audience reaction: Very moving; beautiful, amazing, sensitive, powerful, evocative, sad, thought provoking, brilliant, heart breaking, poignant, harrowing; disturbing, fabulous, bleak, haunting. Although, for a few, it was: boring; slow and soporific; nearly maudlin; a potentially interesting plot became a boring film. The story: “Brilliant script; excellent on all counts; a family and a nation confronting its tragic history; two lives that come together for a ‘truth’; a ‘coming of age’ story packaged in unlikely clothing; not exactly a darkly comic gem; the meaning was sometimes obscure; lots of unanswered questions; would have liked more explanation; lots of negative emotions; not a feel good film; I quite expected a ‘Thelma and Louise’ of the 50’s; great to see a film about women with men in a ‘secondary’ role!” For some the ending was difficult to understand: “I guess Ida made an informed decision!” … and the question that crossed many minds – “What if she was pregnant? “ The acting: “Excellent acting; understated lead actress; so much emotion conveyed with so little expression; touching development of the relationship between aunt and niece; Red Wanda was great – other characters were very thin.” The filming: “Good in B&W; stunning, mesmerising; wonderful stillness; beautifully photographed; the lighting alone merits an award; the bleak landscape added to the austere atmosphere; different framing on some shots caught the dilemma of the situation; B&W reinforced the post war and run-down Eastern Bloc setting; loved the stark atmosphere; shots seemed to be either very close-up or wide-open spaces; every frame – if frozen – a Robert Frank photograph; many of the shots were, in effect, stills that then acquired motion; weird camera angles; strange image framing.” The direction: “Wonderfully slow and intense pace; occasionally slow but worth the wait; quite difficult to slow yourself down enough to appreciate this film; liked the calm pace; art more than substance; long scenes with little dialogue.” … and the music: “Enjoyed the music – jazz and classical; musical score was a bonus.” Regarding the film’s success: “Well worth the awards that it has won; give it the Godalming Award to add to the others; deserved its Oscar; good festival film.” Although not everyone agreed: “I would have picked The Rocket for the Oscar.” Some thoughts about the short: “Clever but too violent; amateurish in comparison to Ida; did not enjoy The Ringer; interesting but not memorable.” Final comment: “Both films were about separation and abandonment – both carefully crafted and non-judgemental.”