Me and Earl and the Dying Girl

Amazing film about Greg, a 17 year old film geek and loner, and his buddy Earl. It explores the deep platonic friendships between teens across gender, class and race. Sundance winner. 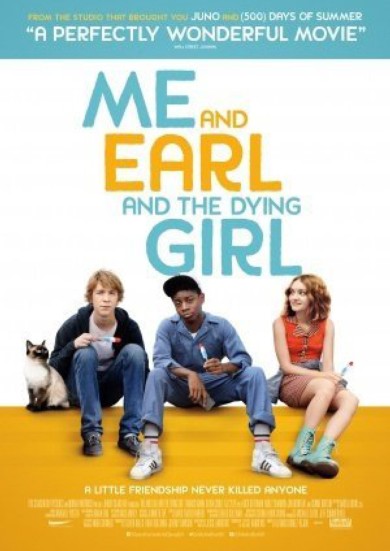 Albeit a teen cancer tearjerker, Alfonso Gomez-Rejon’s funny and bruising Sundance sensation earns every tear it wrings. The film focuses on a generic high school kid named Greg, who spends all of his time making parody versions of classic films (e.g. ‘The 400 Bros’) with his co-worker, Earl. The videos are a great expression of Greg’s cinephilia, but there’s little point in making so many movies if none of them are really your own. However, Greg learns of a local girl, called Rachel, who has just been diagnosed with leukaemia and there’s no greater catalyst for a pubescent male movie character to come into his own than that. Despite the occasional slow pace and a few quirky character touches, the film develops a rare emotional power, particularly when Greg is pressurised to make Rachel an original film. The project forces Greg to eclipse his influences and risk doing something that puts himself on the line, and the film follows suit. Thanks to a restless visual dexterity and a brilliantly deployed soundtrack, this spirited movie on a familiar theme achieves considerable power and originality.
David Erlich Time Out 2015
There is no lachrymose sentimentality about ‘Me and Earl and the Dying Girl’ – a funny, hip, touching and utterly irresistible comedy drama about a trio of high school misfits, one with leukaemia. It is like a Wes Anderson re-make of ‘Love Story’ art-directed within an inch of its life and packed with original camera angles as well as sharp one-liners. If, at times, it does read like a proto-typical Sundance Festival winner, with the subtle direction of Alfonso Gomez-Rejon and uniformly excellent performances from a perfectly chosen cast, it turns out as a remarkable film. The shaggily charming Greg is a chronic under-achiever, who negotiates high school by carefully avoiding friendships that might place him in one clique or another. Greg and his best friend and ‘co-worker’ Earl make short parodies of well-known films (‘A Sockwork Orange’) when they aren’t watching art films. They are pushed out of their comfort zone when Greg’s Mum forces him to pay a visit to a terminally ill class-mate, Rachel. They quickly bond over Greg’s self-deprecating humour and their shared love of the arts. The request that they make a film especially for Rachel forces Greg to focus on his feelings for the girl and her unhappy fate. With lots of sharp comic dialogue, this wonderful movie is about as good as it gets.
Lou Lumenick New York Post 2015

What you thought about Me and Earl and the Dying Girl

There was a warm and considered response to new director Alfonso Gomez-Rejon’s film ‘Me and Earl and the Dying Girl’ and its “perceptive and original” vision of teenage relationships. There was general praise for the film’s ability to portray “deep feeling without falling into the pitfalls of fake sentiment” and “to develop an astringent vision of American high school life” while, at the same time, “creating characters and relationships that rang true”. The “combination of humour with wit and genuine feeling” struck many in the audience as well-served by “sharp and authentic dialogue” and “a range of superb acting performances”. The “clever, intimate camerawork” brought the emotional issues forward with “subtlety and sensitivity”. Several responses admired the “flashes of genius” in the narrator and Earl’s film-making and their parodies of the canons of classic cinema – ‘Sockwork Orange’, ‘The Seven Seals’ and ‘Death in Tennis’ for example. It was this which gave the film “an impressive and powerful originality” in which to frame “a deep sadness of outcome”. The emotional heart of the film, for many in the audience, was “poignant”, “heartrending” and “painful” but in the context of “sharp humour”, “perceptive mockery of institutions” and a “sense of the matter of fact” and “down-to-earth” acceptance and insight. The dramatic pace of the film was “meticulously judged” allowing a “full sense of involvement” for the audience. It was a “very stylish film” with “great insight into the seventeen-year-old sensibility”, both “perceptive and honest”. For one viewer, Greg’s (the narrator) “voyage of discovery” was “full of pathos and humour” leading overall to a “fascinating and somewhat disturbing film”. There was widespread praise for the “excellent musical score”. There was barely a dissenting sentiment in all this general appreciation, although a significant number of those who had enjoyed the film felt that the quality of the sound was poor and too much of the dialogue was mumbled and lacked clarity.