Sandra (Marion Cotillard) has been off work due to stress; when she returns the boss tells her co-workers they must vote to keep their bonus or for Sandra to keep her job - but not both. A moving study in human decency under stress. 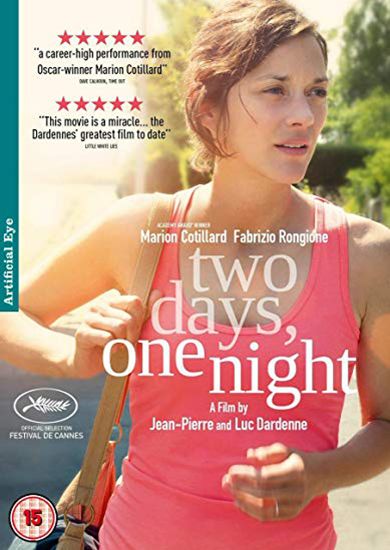 The Dardenne brothers may have outdone themselves with this heart-wrenching film; it is set to be a classic drama of working lives and, in its way, a classic trade union drama. The subtly magnificent central performance from Marion Cotillard underpins everything. Cotillard looks real, sounds real. This supremely intelligent performer has found an utterly authentic relationship with the material. It is an impassioned, exciting and moving film – a ‘12 Angry Men’ of the 21st century workplace. Cotillard plays Sandra, a married woman with children, who returns to work at a solar panel factory after a nervous breakdown. However, while she has been away, the management have realised her work can be achieved without her. They are proposing to fire Sandra and make everyone else work a bit harder, with a one-off 1000 euros bonus apiece as a sweetener. So, a vote is instituted. Do they want their bonus or to save their friend and colleague Sandra? The Dardennes have made a brilliant social-realist drama, with a narrative tension that is a novelty in their work. But solidarity is what the film is about; a union, in fact. This is what Sandra is trying to achieve, through a majority vote in a democratic election. Her restrained and dignified portrayal is as compelling and moving as the film.
Peter Bradshaw The Guardian 2014
The world of the Dardenne brothers is a zone of factories, housing projects and modest suburban developments, as they create an austere and democratic style of realism. Their working-class heroes and heroines make their way in stark circumstances, their ethical and material challenges presented without glamour or sentimentality. In ‘Two Days, One Night’, Marion Cotillard gives as fine a piece of screen acting as you will ever see. As a working mother fighting to save her job, she accomplishes a breathtaking transformation. She moves past naturalism into something impossible to doubt – an ordinary person, in mundane circumstances, who finds her job is in danger of disappearing. If Sandra is laid off, all of her colleagues will receive a 1000 euros bonus; if they agree to give up the bonuses, she can keep her job. The film consists almost entirely of encounters between Sandra and the people who have been given the power to decide her fate. What makes the film moving as well as gruelling, thrilling as well as harsh, is the emotional impact of each conversation. There is anger, compassion, evasiveness and shame. A lot more than money is at stake but the Dardenne brothers never underestimate the importance of money in their characters’ lives. ‘Two Days, One Night’ does not paint a pretty picture of the world as it is now but, because of the grace and gravity of its star, it’s a beautiful movie.
A O Scott New York Times 2014

What you thought about Two Days, One Night [Deux jours, une nuit]

This was a film that divided the audience. While over two thirds of those who responded rated the film as Excellent or Good, a fifth felt it was only Average and nearly a tenth of the audience found it Poor. Many members commented favourably on the acting, especially that of Marion Cotillard: ‘Wonderful acting'; ‘Cotillard is magnificent’; ‘Very believable and natural performance’; ‘Oddly unengaging - despite Marion Cotillard's intense performance’. However, as the last comment shows, for some an excellent central performance didn’t make up for flaws in the film. The main flaw, members felt, was that it was slow and uneventful, even boring. ‘Well acted, scenes excellent but a bit slow’; ‘a surprisingly good film where nothing happens’ ; ‘worthy but rather boring’; ‘too drawn out’; ‘this was extremely boring’. Those who rated the film as good or excellent found the scenario and the interactions between the characters to be engaging and believable: ‘loved the everyday realistic feel’; ‘full of suspense’; ‘very moving interaction between the characters’; ‘convincing description of … the balance between loyalty and self interest’; ‘enjoyable; interesting study of human relationships’; ‘nuances of character …portrayed without sentiment and with gripping reality’; ‘excellent portrayal of her inner fight to restore her self-esteem’. By contrast, others found the scenario unconvincing and the interaction between the characters uninteresting and this affected their ratings. ‘I felt there needed to be more difference/tension between each interaction’; ‘interesting idea but I thought the premise was wrong’; ‘I’m surprised French employment law would allow this situation’; ‘unlikely premise’; ‘all rather unbelievable’; ‘I can't believe a company would put its workers in that situation’; ‘situations not wholly convincing’. Some members praised the ending of the film: ‘She didn’t get the job…but she got her self-respect back’; ‘slow fuse to a heart-warming ending’. Others found the ending disappointing: ‘ending too obvious’; ‘I would have liked a more definite ending’; ‘it was a bit open-ended’.