Epic police drama focusing on the desperate attempt to capture "la French," the head of a drug smuggling operation out of Marseille. Stellar cast and great soundtrack. 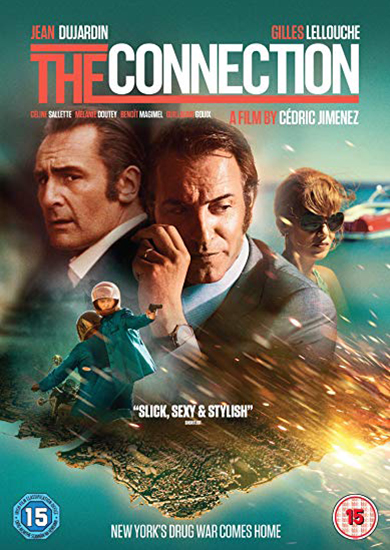 ‘The Connection’ has a gritty, true-crime tale to tell. This French drama about fighting narcotic traffickers in the 1970s is based on the true story of a judge in Marseille who became obsessed with taking down a heroin kingpin. Oscar winner Jean Dujardin plays the judge, Pierre Michel, and Giles Lellouche takes the role of the mob boss, Tany Zampa. Both are tremendous, in this character study of two men on opposite sides of the law. As the film begins, Pierre, a juvenile magistrate, has been promoted to work on organised crime cases. His job is to do something about the bloodbath taking place in Marseille, where drug wars have led to shootings in busy streets in broad daylight. Heroin is a lucrative business and money is used to bribe whomever it takes – police officers, political officials – to keep business running smoothly. To get to the boss, Pierre will have to dismantle the entire network. Tany, the mob boss, a Naples transplant, is quietly terrifying as he directs his henchmen, designating whom to kill and whom to spare. But he and Pierre have their similarities. They swim for exercise, they read to their kids, they spend time with their friends and make concessions for their wives. And Pierre is hardly perfect. The judge is willing to bend the rules to get what he wants and his obsessive tendencies with the drug case aren’t so different from a gambling addiction he swears is behind him. The director has created a slow burn of a movie with steady and mounting tension. It has a retro feel with red-tinged club scenes, mirrors everywhere and an evocative and atmospheric sound track. In truth, ‘The Connection’ has the power of many police procedurals, but there is something in this gritty true-crime story that fascinates and compels attention.
Stephen Merry - Washington Post 2015
‘The Connection’, a drug-running French drama, set in 1970s Marseille, and based on real life events is, in essence, a tale of two tough guys on either side of the law. One is Tany Sampa, a notorious kingpin, smuggling vast amounts of heroin to the US; the other is Pierre Michel, an indefatigable magistrate determined to bring him to justice. From this familiar set-up, the director uses many familiar scenarios. The incorruptible cop whose obsession with his job strains his relationship with his wife; the ruthless criminal who begins to display a touch of humanity; the ambitious gangster who betrays his friend. ‘The Connection’ is a genre exercise, slick, sure and with taut set-pieces. It looks excellent, steeped in 70s period detail, and has high-voltage performances from Lellouche and Dujardin, breathing life and tension into the script. The ending, when it comes, hits like a body blow: bold and devastating.
Patrick Smith Daily Telegraph 2015

What you thought about The Connection 'La French'

There was a warm and enthusiastic response to Cédric Jimenez’ “taut, hard-hitting and absorbing” police thriller, dealing with corruption “so deep and profound it was truly shocking”. Many of you found the film particularly involving because it “transcended easy stereotypes of good and evil” plotting parallels between the two main characters which “deepened and entranced the standard thriller format”. You enjoyed “the excitement, the fast-moving pace”, and particularly the power of the 1970s context and the evocation of “accurate period detail in dress and décor”. There was praise, too, for the “accumulating tension, the sense that something dreadful was about to happen” which together with “some fine performances from the principal characters” made the film “totally gripping” and ensured that “attention never wavered”. Several comments mentioned high praise for the cinematography – in interiors, street locations, discotheques and beach fronts – which created an overall “authenticity”, which “grounded the film firmly in a place and an era”. It was, for some in the audience, “far too real and hence thought-provoking in its portrayal of corruption in high places”. For one or two of you the scale of corruption, as typified by the closing shots of the film, “called the sacrifices of the brave and good into question”, and therefore deepened the moral perspectives of the film, giving it a “brutal power”. There was praise too for the musical soundtrack which “created both atmosphere and reflection on events”. It was, said one member of the audience, “bleak but believable, hence its power”. It was clear, overall, that this judgement was widely shared. There were a few minor criticisms: “overlong and lacked staying power”, “too confusing once the police corruption was introduced” and “somewhat predictable (and even sentimental) in the death of the hero”. These points apart, however, there was a common consensus about the quality of the film and that it made a powerful start to the season.