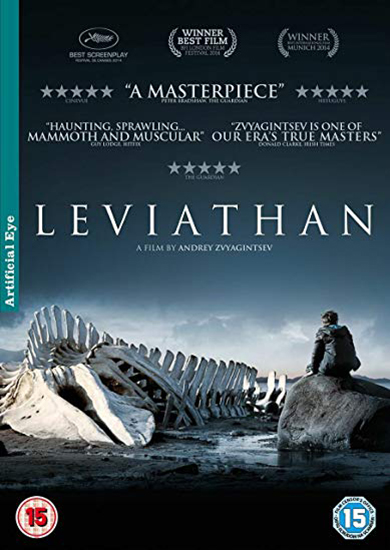 The great trial of Job is reborn in this magnificent Russian movie. ‘Leviathan’ is a tragic drama, compelling in its moral seriousness, with a severity and force that escalate into a terrible annihilating sort of grandeur. Zvyagintsev combines an Old Testament fable with something of Elia Kazan’s ‘On the Waterfront’. Kolya is a car mechanic, with a modest property on prime real estate; but a crooked mayor wants this land and hits Kolya with a compulsory purchase order. Kolya’s old army buddy, now a slick Moscow lawyer, has a file on Vadim, the crooked mayor, which he promises will induce him to back down. However, attempting to blackmail Russia’s well-connected gangster class is fraught with danger. ‘Leviathan’ shows a world governed by drunken, depressed men; everyone is drowning in vodka and despair. The title of the film refers to Hobbe’s ‘Leviathan’, the classic work on liberty and the state. Stunningly shot and superbly acted, this is film-making on a grand scale.
Peter Bradshaw The Guardian 2014
‘Leviathan’, which many expected to win the Palme d’Or at Cannes earlier this year, is a tragedy and a masterpiece, with or without theological or Hobbesian references. This is a bold and brassy piece of work, one that sticks two fingers up to the Kremlin and does so with style. Its plot, desperate and darkly funny, stands strong because it taps into something everyone loves to hate – impenetrable bureaucracy and the corruption of power – and looks at it in the place where everyone assumes this sort of thing is worst: Russia. The protagonist, Kolya, is a nice guy living on the stunning, windswept shore of the Barents Sea. He built his home himself and has now been hit by a compulsory purchase order from an unscrupulous local mayor. Kolya invites his old army buddy to come and stay while they appeal against the order. He doesn’t seem to have spotted the looks of longing exchanged between his young wife and his friend. All the ruling classes get a bashing here – the government, the legal system, the church – and it’s all done alternately with a light touch and thundering clarity. The film skips neatly between droll satire and loud comedy. It is both a small-town domestic drama and a large scale, meaty political protest, with thinly veiled anger at real regimes.
Francesca Steele The Spectator 2014

What you thought about Leviathan

There was a varied but strongly positive response to Zvagintsev’s “compelling and powerful” portrait of “political corruption, brutality, injustice and betrayal” in contemporary Russia. The world of the “gangster state with its cruel parody of law” struck several in the audience as “a very courageous and brave film” given the current political climate in Russia. The film’s atmosphere evoked a range of responses from “deep sorrow and sadness” and “terrible pity for those trapped in a hopeless struggle” to “anger at a complacent and conniving church which had the temerity to proclaim ‘truth’ as its central message”. Many comments linked “the beautifully photographed, bleak landscape” with the “corruption and injustice” of events and complimented the film for its “remarkable cinematography and visual power”. The use of “skeletal, spectral remains of whales and ships” was, in several responses, seen as a “strong metaphor” for the despair in the film. One member of the audience wrote “5* for the acting – I believed in the characters as real people which drew me into the film” and there was praise for performances of Kolya, Lilya and Vadim (the crooked mayor). The theme of “betrayal at all levels – personal, social, political” was “gripping and convincing because of the power of the central, performances” and the “dramatic tension generated” even in a long film. The portrayal of contemporary Russia – “corruption, alcoholism and depravity” – was “disturbing and frightening”. Indeed, several responses marvelled at the quantities of vodka drunk in the film, so “it almost became a character in the action” and was “a liver-crippling journey to despair”. The film was summed up by one member as “a truly disturbing insight into the truth of Mother Russia – as corrupted and tragic as under the Romanovs”. However, praise was not universal. A number of responses found the film “far too long” and the “action and events too long-drawn-out”. Some felt the symbolism was “too heavy-handed” the whole film “joyless and depressing”, and the “gloom and despondency” did not make good viewing. It was “beautifully shot, but a moral tale that went on too long”, “too bleak and despairing” and “ultimately unsatisfying, despite beautiful photography and fine acting”. More critically, some found it “painfully slow, pedestrian and hackneyed”, “difficult to follow” while being “desperately sad”. One member summed up this view: - “Too miserable for words”.