An Arabic "Wild West" adventure about a young boy forced to fend for himself when left stranded in the desert. Mesmerising. 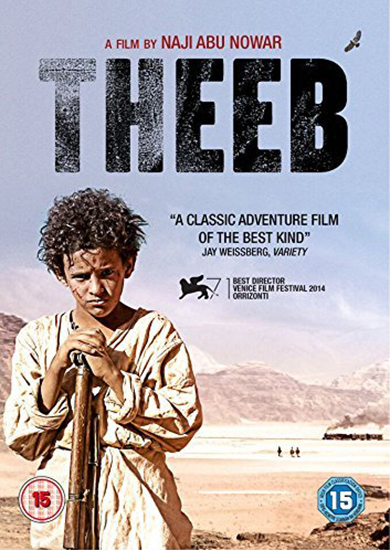 ‘Theeb’, which means ‘wolf’ in Arabic, is a great film which raised very high expectations and certainly doesn’t disappoint. It is a film of quality on every level and appeals on many levels too. It is a spectacularly epic film, with a wonderful intimate human story. It possesses those elements and qualities which characterise the appeal of cinema itself. ‘Theeb’ takes place during World War I, in a forgotten corner of the Ottoman Empire. It is 1916, the start of the Arab revolt, in the years of the famous (or infamous) T E Lawrence, Lawrence of Arabia. But it is in no way, shape or form a modern day ‘Lawrence of Arabia’. It is a film about the vastness of desert, the strength of a child and the beauty of the culture of the Bedouins, who not only survive within their harsh environment, but thrive and continue. The film itself creates its own tensions – the kind of film that grabs you and doesn’t let you go. You can smell the desert and taste the grittiness of the sand. Theeb himself is played subtly and powerfully by Jacir Eid, the stranger by the charismatic Hassan Mutlag. The Director says that he had always wanted to make a Bedouin Western and, in listening to the Bedouins, he could capture their codes and their story in this film.
E Nina Rothe The Huffington Post 2014
‘Theeb’ opens with a vivid portrait of Bedouin society, particularly the highly formalised rituals of praise and hospitality that mark the arrivals of guests and strangers in their midst. The Director has crafted a nuanced look at the collision of east and west that occurred on the Arabian Peninsula during World War I. The film’s hero is a young Bedouin boy who is prematurely burdened with the responsibilities of manhood when his tribe is unwittingly pulled into the Arab revolt against the Ottoman Empire. When his elder brother is chosen as the visitors’ guide, Theeb sets out to follow them. Despite the film’s measured pacing and simple plot, the story takes several surprising turns and confounds the viewers’ expectations throughout. The film depicts a boy’s coming of age, a traumatic initiation into the violent world of tribal manhood on the fringes of civilisation and empire. But Theeb has unknowingly partaken in an irreparable transformation of his world which will lead to the slow decay of the traditional Bedouin way of life. The film heralds the inauguration of a new film genre: the Bedouin western. The film’s desert setting evokes the stark beauty of the classic films of John Ford and, like those films, it is concerned with elemental themes of survival and revenge, embodied by men as hard and unforgiving as the landscape.
Oleg Ivanov Slant Magazine 2015

What you thought about Theeb

The Oscar contender “Theeb” with its cast of non-professional actors was highly rated by our members. “A remarkable performance from the young lead actor – with hardly any dialogue, he managed to convey emotion and thought with great depth and maturity” said one member. Another said “the “actors” beat RADA hands down!” Finally, a viewer said that “even (the) camels were well behaved”! “A glimpse into a whole other, beautifully rendered world, through the prism of a not unfamiliar narrative” observed one member, whilst another remarked on “a real example of a “rite of passage” … left home unable to kill a goat and returned able to kill a man – and so being true to what he felt to be right.” It was a “picture of Bedouin life” which reminded one viewer “of the sagas – something very fatalist about it – burdened by the obligation of hospitality”. “Tension, quietness, memorable” and “transported to another world” were other descriptors. Other aspects that were mentioned by a number of members were the “great cinematography” and “stunning” setting of the desert. The “hypnotic movement of camels and music” was remarked upon. “The music created a strong atmosphere – and the desolate scenery too” whilst another complimented the “understated but perfect music”. “Scenery 10/10, music 10/10!” The only criticism was that the film was found by a few to be “slow moving”, whilst others found this to add to the “atmospheric” and “mesmeric” effect of the film. “Some surprises. The reverse of the Lawrence of Arabia shot of Omar Sharif approaching from the distance!” “Far exceeded my expectations from the programme” and “gripping – one couldn’t take ones’ eyes off the screen.” “A film like this needs one’s full concentration. A cinema is the best place to see it.” A member concluded that “Theeb” is “exactly the sort of film the club is for! Well done.”