A boy, believed to be cursed, leads his family through war-torn Laos to find a new home. Along the way they come across a village holding an annual rocket-building contest. 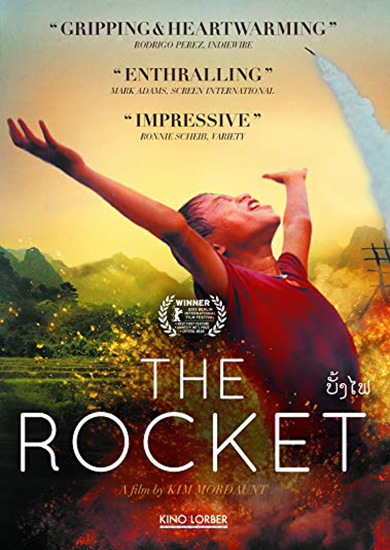 ‘The Rocket’ is a debut fiction feature from an Australian documentary maker, set in Laos. It is a likeable piece of work whose gentleness is an interesting contrast to the grim and even tragic subject matter. ‘The Rocket’ seems to have grown out of Mordaunt’s 2007 documentary ‘Bomb Harvest’ about an Australian bomb disposal expert trying to clear away the huge number of unexploded devices dropped on Laos by the U.S. during the Vietnam war. The story is about a young Laotian boy, Ahlo, who is believed by his family to be “cursed”, a bringer of bad luck. Ahlo battles on, however, making friends with an orphan and her batty uncle and comes to believe that if he can win the local firework competition with his homemade rocket he can hit back at his own bad luck – and maybe, in some way, hit back at the bad fate that sent bombs raining down on Laos. A sweet-natured, thoughtful and sensitive film.
Peter Bradshaw The Guardian 2014
A pretty, strange, once-upon-a-time tale, ‘The Rocket’ is the story of a Laotian boy who transcends adversity and is the film’s plucky 10 year old hero, Ahlo. The story is simple. Suddenly, everyone in a community is on the move, being relocated to make way for a dam. Ahlo’s family haul their meagre goods across lush countryside but suffer a terrible accident, which is pinned on Ahlo. ‘The Rocket’ avoids political complexities to concentrate on Ahlo and his everyday travails and adventures, including his friendship with a sad-eyed girl, Kia, and her eccentric uncle. The prevalence of unexploded bombs is a running motif in ‘The Rocket’ and in one sharp but surreal scene in an abandoned mountainside village, large missiles can be seen propping up homes. What gives this movie its sting is that despite its sense of optimism, death hovers over the story everywhere, from the truck filled with bombs on which the family hitches a ride to the eye-poppingly dangerous rocket contest that gives the film its title. Here, every smile seems etched in sorrow.
Manohla Dargis New York Times 2014

What you thought about The Rocket

By far the greater majority of you enjoyed the film very much: “Loved it; should have won the Oscar; what a gem; so poignant; a moving story; wonderfully tense and original; a film of immense charm yet strong stuff; delightful; a feel good film; really loved it; beautifully atmospheric” Many were captivated by an unfamiliar theme and unique cultural context enhanced by outstanding photography and a good sound track: “An unusual theme sensitively portrayed; surprisingly enthralling!; powerful investigation of traditional beliefs; beautifully filmed – amazing scenery; photographic genius; beautiful scary film; a different kind of film to emerge from wonderful photography and the juxtaposition of sophistication and a simple way of life; gentle in parts but ugly and brutal as well; difficult for a Westerner to comprehend the Laotian way of looking at life; soundtrack was an excellent complement to the film.” The charms of Laos were not for everyone, however: “I was not drawn to the place and people.” Clearly the film had fairy tale qualities– including a bad tempered grandmother and a wizard for an uncle – with a ‘happy ever after’ conclusion: “A bit sentimental; mythical story line; well – I believed it! faintly ridiculous story; quite unbelievable.” One or two thought it “Mawkish, and over-sentimental” offset by “some good insights into corruption, superstition and deprivation” and a “good balance of humour and tragedy”. For one member the film was “A documentary about Laos with rockets!” Nevertheless, the film provided a vehicle for some superb acting: “Remarkable acting by the children; kids were unbelievably believable; how did they get the children to do that?; wonderful to see Grumpy Granny smile". There was some criticism of the director: “Uneven continuity; patchy plotting; sagged a bit in the middle.” For one or two, however, the high point of the film was the James Brown dancing scene! A few of you who have experience of Laos where able to confirm the authenticity of the film; “Brought back memories of recent visit (If it moves – they will eat it!); authentic costumes and ambience.” Final comments: “This film really took off! “ “Slow burner with an explosive ending.”