A drama based on the autobiography of Li Cunxin. At the age of eleven, Li was plucked from a poor Chinese village by Madame Mao's cultural delegates and taken to Beijing to study ballet. In 1979, during a cultural exchange to Texas, he fell in love with an American woman. 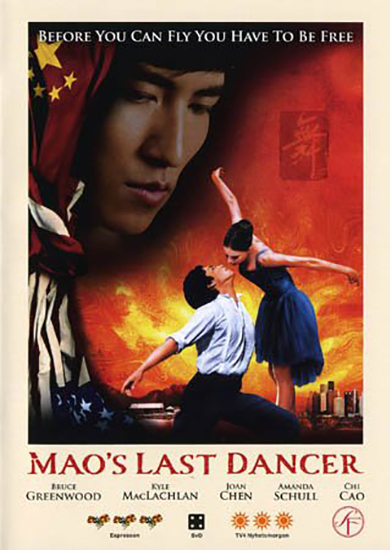 ‘Mao’s Last Dancer’ is a conventionally told biopic with two powerful assets – a remarkable true story and an appealing lead actor who is also an extraordinary dancer. The film chronicles the life of Li Cunxin, a Chinese ballet student who is selected for a cultural exchange programme with Houston Ballet in 1981. The film opens with his arrival in Texas and his first taste of Western culture including a night of disco dancing. Li’s acclimatisation to his new environment is intercut with scenes showing just how far he’s come. He grew up poor in a rural village and was plucked from his classroom aged 11, to attend the rigorous Beijing Dance Academy. In Houston, an injury to a principal dancer leads to the opportunity for Li, to step in as the last minute substitute for the lead role in a televised production. He becomes a local celebrity and is making headlines when he marries an American dance student and announces his intention to defect. A great strength in the film is the actor/dancer Chi Cao, a principal dancer with the Birmingham Royal Ballet, who plays Li Cunxin. He is not only a terrific dancer, but fully convincing as an unworldly young man experiencing an alien new culture. Location filming in China add authenticity to the story. Li Cunxin’s East-West odyssey has become an effective movie about clashing cultures.
Kevin Lally, Film Journal August 2010
There’s no shortage of dramatic sweep in the story of Li Cunxin. The peasant’s child became an international ballet star, but not before his 1981 defection from China to the United States sparked a diplomatic showdown and front page headlines. In this film adaptation of Li’s autobiography, Bruce Beresford tugs the heartstrings as he moves the inspirational material towards its finale. Screenwriter Jan Sardi compresses and simplifies events, moving between Li’s upbringing in Maoist China and his arrival in Reagan-era Texas. Screen newcomer Chi Cao, a principal with the Birmingham Royal Ballet, dances with an elegant athleticism and is convincing too as a country boy bewildered by the excesses of American capitalism. The dance sequences, choreographed by Graeme Murphy and Janet Vernon, have an undeniable power and Beresford wisely shoots them in a straightforward manner and lets them play at length.
Sheri Linden, Los Angeles Times 2010

What you thought about Mao's Last Dancer

The round of enthusiastic applause at the end of the screening testified to the great popularity of this film. The audience responses were a deluge of praise: “uplifting”, “inspirational”, “beautiful”, “amazing”, “emotional”, “poignant”, “exhilarating” and many more adjectives in the same vein. There was a warm response to “a powerful, simple and true story” and the “thrilling and beautifully executed dance sequences”. Many of you found that the marked contrast between the affluence of Texas and the poverty of provincial Chinese life was well presented and gave the film a dimension beyond the dance alone. Several comments were made about the “intelligent and direct acting” of the principal dancer Chi Cao, (as Li Cunxin) as he portrayed a “naïve and innocent young man in an initially incomprehensible world”. But above all, it was clearly the spectacular and moving dance sequences which captivated the audience. The dancing was “powerful”, “wonderful” “totally absorbing”, “breathtaking”, “mesmerising”, “enthralling” and “magical”. For one member, it presented ballet itself in an entirely new and positive light and for another “made the hairs on the back of my neck stand up”. There was hardly a reservation within the overwhelming praise for the film. One or two responses wondered if it wasn’t “perhaps over-simple and rather sweet”, “a bit unchallenging” and “blatant U.S. propaganda”. In one response it was “trite, patronising and sentimental”, but even this stern critic confessed to being moved to tears.