In ancient China, before the reign of the 1 emperor, one man defeated 3 assassins who sought to murder the most powerful warlord. 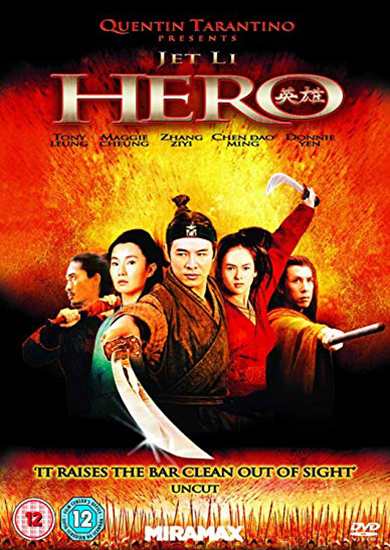 Comparisons are inevitable, so let’s get them out of the way. ‘Hero’ is a better film than ‘Crouching Tiger, Hidden Dragon’. ‘Hero’ is the real deal. Zhang Yimou, who has emerged as one of the East’s most visually adventurous directors, and cinematographer Christopher Doyle, have between them, raised the action bar too high for Hollywood’s current reach – pushing the craft of action way beyond anything that commercially driven Western cinema has so far delivered. The fights form a consummately sustained crescendo: a contest in a rain-drenched chess arena is followed by a frantic battle in an autumnal forest, as the duellists swoop among an orange blizzard of falling leaves. The visual invention continues as swarms of arrows turn the sky black, a deathly game of hide and seek takes place between endless sheets of billowing green silk. No descriptions can do it justice. You’ve seen a lot, but you’ve never seen anything like this. It’s about movement, colour and music. And rarely in any country’s cinema, will you see a film so charged with all three.

Pomp, panache and narrative puzzles waltz their way through Zhang Yimou’s martial arts rhapsody, a luscious whirligig of horseplay which pitches Chinese imperial history as cartoon romantic pageant. A cadre of Asia’s finest actors submit themselves to Zhang’s paint box prodigalities, in third-century BC China, when the ruler of Qin sought to unify the seven warring kingdoms. An unsung nameless warrior claims to have rid the King of his three most dangerous enemies. As he spins out the story of his success, the King suspects falsehoods, and rival versions in flashback fill the screen – saturated with red, then white, then blue and green. The sumptuousness recalls Zhang Yimou’s earlier work as a director, though now the film proposes pacification through conquest and subjugation, a darker and more authoritarian reading of historical events.

What you thought about Hero

There was a warm response from members to Zhang Yimou’s pageant of Chinese Imperial history – in particular to the ‘stunning visual beauty of the cinematography’ using an ‘astonishing palette of colours’. Many responses found it ‘a very beautiful film to watch and to listen to’ with ‘majestic landscapes’, ‘breathtaking scenery’, ‘hauntingly beautiful music’ in a ‘tour de force of film making’.

Many showed admiration for ‘the director’s imaginative vision’, ‘the remarkable deployment of armies of extras’ creating overall a ‘mesmeric epic of mythology’ which was ‘spectacular in its overall conception’. You enjoyed the ‘strangely moving balletic treatment of combat’ and the ‘beautiful stylisation of history’ and found within the narrative ‘ethical strands of sacrificial action for the long term greater good of the greater number’.

For some, however, the film presented a ‘fantasy history’ that nevertheless carried artistic conviction through its ‘magnificent epic structure’. Others found it a ‘confusing and hopeless story’ but just lost themselves in the ‘sumptuous visuals’. It was exciting to watch the visual effects combining to make ‘a powerful juxtaposition of beauty, grace and violence’.

There were, as always, some reservations and concerns. Some found the fight scenes ‘impressive to begin with but finally repetitive’. Some distrusted the visual power of the filming as indicating ‘a propaganda view of history’. In other responses there was felt to be confusion about motives and the codes of Chinese chivalric honour as well pointing out that the narrative was, itself, pretty thin! The film was little more than ‘enjoyable nonsense’. Despite interesting elements of ‘love, idealism and loyalty’, the film was ‘long winded and lacking in dramatic clarity’.

Some members acknowledged that they did not care for the genre and found the action sequences too repetitive and that they catered to an acquired taste.