The newly elected Pope suffers a panic attack just as he is due to appear on St Peter’s balcony to greet the faithful. 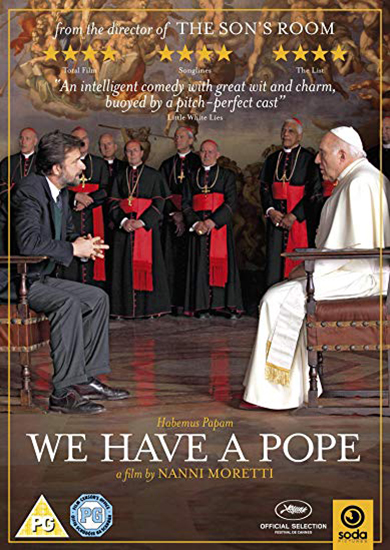 In ‘Habemus Papam’ Moretti’s premise is enticing, almost brilliant. One pope dies and the conclave to elect his successor settles on Cardinal Melville, played with perfect mournful sensitivity by 85 yr. old Michel Piccoli. Moretti pulls off a tremendous opening set piece, in which the assembled cardinals cast their votes for one of their number, each and everyone praying they don’t get the nod, aware of the crushing effect that the pontificate would have on their lives. It’s at the very moment when the cry ‘habemus papam’ goes up that Melville’s self-doubt surges out of control; in a great howl of fear he refuses to step out on to the balcony and throws the papal selection process into limbo. The Vatican’s officials call in a psychoanalyst (played by Moretti himself) to try and talk Melville round. Here Moretti delivers another brilliantly witty scene, in which his attempts to delve into Melvilles psyche are hampered by doctrinal interventions from the earwigging cardinals. At this point the Pope scoots off into the big city to wander through down-to-earth realities as he wrestles with his doubts alone. Much of what follows is valuable and funny as Moretti organises volleyball in the cloisters and Melville, always thoughtful and humane, wanders from bakery to theatre to hotel. There’s something of Christ among the people about him, as in one moving scene he rehearses his doubts aloud on a crowded bus. Moretti deserves respect for not simply taking a hatchet to the papal office. ‘Habemus Papam’ wants to emphasise the human consequences of a great religious office. It succeeds in this in a moving, perceptive and profound way.
A. Pulver, The Guardian May 2011
By turns sweet, sad and poignant, ‘Habemus Papam’ is the story of a man who doesn’t want to be God’s representative on earth. The movie opens with a papal conclave, a gathering of cardinals in the Sistine Chapel, in order to select one of their own as head of the Roman Catholic Church. Amusingly enough, the same silent prayer is on the lips of nearly every candidate: “Not me Lord, please”. But far from the comedy that this opening scene makes the movie out to be, ‘Habemus Papam’ is a nuanced, moving and profoundly humane exploration of doubt, faith, weakness and resolve. But Moretti gets at something deeper than the hilarious volley-ball contest between the cardinals, as they kill time until the situation is resolved. The question he’s interested in is ‘What is a Pope?’ In today’s world, with challenges facing Catholicism on multiple fronts, it’s a question worth asking. Being Pope, the film suggests means losing a central part of what makes you what you are. It’s a position of power that erases the self, when what the church needs is a leader who’s more, not less, in touch with his own humanity.
Michael O'Sullivan, Washington Post April 2012

What you thought about Habemus Papam

There was a warm and appreciative response to Nanni Moretti’s film about a troubled and self-doubting pope. Many in the audience found it “thought-provoking”, “sensitive”, “hilarious at times”, “breaking new ground” and at the same time “extremely moving”. What held several in the audience was the “intriguing and powerful conflict in the film” and the “over-riding sympathy for such a difficult role and a difficult decision”. For some of you it was a “feel-good movie” but with a “bruising but truthful ending”, which made clear the “loneliness and the enormous burden” of the papal role and portrayed it with compassion. The “subtle mixture of comedy and sadness” also struck a note with several of you, but it was also “very different, very understandable but rather unsettling”. In many responses there was great admiration for Michel Piccoli in the central role, a performance of “great quality”, “superb understatement”, revealing “great sensitivity and humanity” and “thoroughly convincing”. There were some, more negative, views. For some the narrative pace was “too slow” and the film “lost focus” in the middle sections. There was opportunity for “more satire and more humour, but not taken”. The events were “too predictable” and the overall impact “intriguing but not enjoyable”. Some of the humour “fell flat” and the film was “too long” and with “too many loose ends”. There was the feeling in a number of responses that, despite the overall quality, the ending was “weak and abrupt”, “the plot fizzled out” and that the director’s imagination failed to sustain the initial strong base of the film.