How I Ended This Summer

At a polar station on a desolate island in the Arctic Ocean, a seasoned meteorologist and a recent college graduate are spending months in complete isolation. A psychological drama, as fear, lies and suspicions poison the atmosphere. 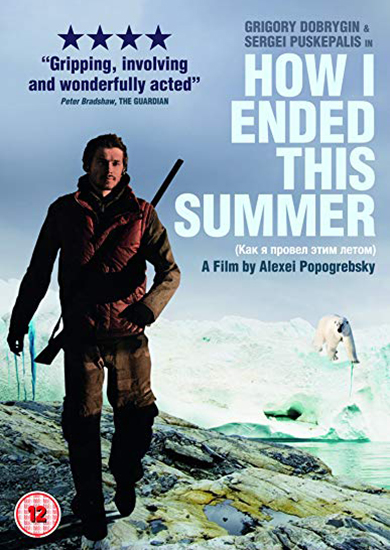 ‘How I Ended Last Summer’ is everything you could want from a tense two-hander, set at an isolated Siberian weather station. It’s about trust, fraying communication, wilderness survival tactics and what the light does at sunrise. Director Alexei Popogrebsky delivers a dark parable about nuclear horror which also functions as a sustained and nail biting psychological thriller. Pavel (Grigory Dobrygin) is a young student out of his depth. Sergei (Sergei Puskepalis) is a grizzled veteran cut off from his wife and child. They’re wary of each other, distant colleagues with no one else for miles around. Then Pavel receives a terrible piece of information over the radio and sits on it, afraid of Sergei’s ‘shoot the messenger’ reaction. There’s never a good moment to spill the beans. Deceit and paranoia escalate and we have a precipitous battle of wits on our hands, with a hungry polar bear and some contaminated trout to up the stakes. Popogrebsky doesn’t tie it up as a pure thriller but makes the harsh landscape and kaleidoscopic skies into something detached, philosophical and compellingly unpredictable.
Tim Robey, The Daily Telegraph April 2011
The ever-changing light on the desolate Arctic island where two meteorologists operate a weather station is as fluctuating as the relationship between the men, in Alex Popgrebsky’s gripping survival drama. On the simplest level, this film is a suspenseful man-braving-the-elements adventure movie in which every excursion beyond the shabby cabin where the men live and work is fraught with physical peril. But ‘How I Ended This Summer’ is a psychological thriller, in which their mutual distrust deteriorates into a potentially deadly game of cat and mouse. ‘How I Ended This Summer’ begins slowly, the better to steep you in an atmosphere of drabness and chill and the sense of being trapped in limbo where time stretches out endlessly. Pavel Kostamarov’s cinematography won an award for outstanding artistic achievement at the Berlin festival and you can feel how barrenness, along with the incessant low roar of wind and waves, can slowly drive people mad. Above all, the film is a merciless contemplation of the fragile human psyche under siege, where you have only your insecure, frightened inner voice to guide you.
Stephen Holden, The New York Times January 2011

What you thought about How I Ended This Summer

As our weather, like the film’s, was Siberian, there were fewer in the audience for ‘How I Ended This Summer’ than is usual at our screenings. Not surprisingly there was a much greater variety of opinions on this occasion than for ‘Mao’s Last Dancer’. On the positive side the film was described as “compelling”, “totally absorbing”, “enthralling”, “continually menacing” with “brilliant and stunningly beautiful photography”. The story and the relationship between the two characters impressed many who liked the film: “gripping and plausible”, “carefully and subtly developed”, “a menacing inability to communicate represented by the crackling radio links”, “full of chilling emotion”. Several of you commented on the “clever and effective” characterisation and its “deep and unspoken feelings” and the deliberate contrast in types, age and backgrounds. The concentration on objects (the fish, the polar bear, the radioactive isotope) to create meaning and atmosphere also struck many of you, as did the almost father and son embrace at the conclusion of the film. One response drew a specific contrast with ‘Mao’s Last Dancer’ and complimented the film society on providing range and diversity in the film programme. Those less moved and impressed by the film overall, were nevertheless caught by the “amazing photography” although less by the “incomprehensible and unlikely storyline”. There was “too little action, rather tedious at the beginning” with “too many static shots”. For many, the pace was “too slow” to develop real tension, and the film itself was “far too long”. The lack of pace “became boring” and led to events, although “bleak and grim”, becoming unrealistic. As one response put it, “it should have been gripping but there was no real interest in the characters involved”.