Once Upon A Time In Anatolia

In a rural town in the Anatolian steppes, the local prosecutor, police commissar and doctor are leading a search for a victim of a murder to which a suspect and his mentally challenged brother have confessed. 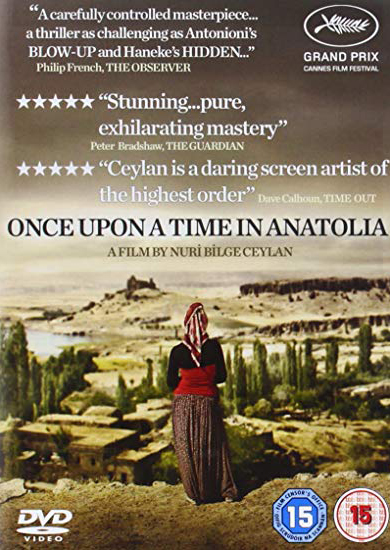 Murder mysteries rarely run as deep as this long dark night of the soul from Turkish filmmaker, Nuri Ceylan. He has an unflinching eye for the worst in all of us and for the black comedy and absurd banalities of everyday life. Ceylan has chosen his bleakest canvas yet in his sixth film, that begins in the dark wilds of the great Anatolian outdorrs and ends in the cold light of an autopsy room. It is mysterious and meditative. We meet a group of policemen, soldiers and others as they drive about in search of a body, with two men suspected of burying it. This is very far from being a traditional whodunit. The murder allows the director to stop and consider what life means and throws in some haunting, jolting moments to remind us that the answer is beyond our grasp. His visual style is less heightened, more down to earth than in previous films and the night-time scenes are like careful paintings, such is the precision of their lighting and composition. As the entourage moves from village to village, the film focuses increasingly on the doctor, a metropolitan outsider, struggling with a fiercely logical approach to life. The investigation unsettles the doctor, as, we imagine, Ceylan hopes to unsettle us, on this compelling, masterly journey.
Dave Calhoun, Time Out May 2012
This exquisite film, the sixth feature by Nuri Bilge Ceylan, is set in a remote ‘dreamscape of mystery and foreboding’. In the search for a murder victim’s body, the caravan of cars makes its fitful way over the rolling Turkish steppes. The journey begins in darkness and moves into the clear light of day, by which point many things are revealed and nothing is as it seems. The searchers are at the mercy of the suspect, Kenan, who apparently was drunk when he buried the body and can only offer the vaguest directions. Given the work at hand and the eeriness of the setting, the men’s’ joking shifts into dialogue on mortality between the Arab (the driver) and the sad-eyed doctor, an increasingly pivotal observer. Having chosen a title that evokes both bedtime stories and Sergio Leone, Ceylan investigates the wild frontier where the living and the dead cross into each others worlds. To varying degrees it’s a place we all inhabit and where we tell our stories whether rambling or precise – forensic reports, confessions, lies that can be comforting or heroic and may never escape the cover of night.
Sheri Linden, Los Angeles Times 2012

What you thought about Once Upon A Time In Anatolia

‘Once Upon a Time in Anatolia’ was clearly a film which strongly divided opinion – the first time this season that percentages for ‘excellent’ and ‘very poor’ were equally matched and with strong variations in between. Given that such strong divisions are a healthy thing for any film society, what were the fundamental differences? Those who disliked it found it ‘tedious’, ‘insufferably long’, ‘a most boring 2½ hours’, ‘turgid’, ‘an attempt to be ultra-clever’, ‘neither intriguing nor enjoyable’, ‘soporific’ and ‘self-indulgent’. It was ‘very slow’ and would have benefited from strict editing ‘by at least an hour’. One sardonic comment suggested that the victim had not been murdered but ‘bored to death’. Responses in the ‘average’ category found the same problems in style, ‘ponderous’, and in length, ‘overlong’ but recognised ‘subtlety in the interaction of characters’, ‘atmospheric photography’, ‘good acting’, and ‘excellent scenery’. There were ‘elements of confusion in the story’ and ‘insufficient resolution of events’ but it was ‘a great study of small town life’ which ‘drew the audience in to care about the characters’, by its ‘atmospheric film techniques’ and ‘intensity of inaction’ There was warm admiration for the ‘superb locations’, the ‘pace and understanding, through which characters were revealed’ and the ‘challenging unexpectedness of events and actions’. It was for several of you, ‘engrossing, brilliantly acted and filmed’, with praise for a director ‘not frightened of silence or pause’ who could create ‘a powerful and haunting atmosphere’ with a ‘sound track of only natural sounds, no music’. Perhaps, after all, it was a ‘Marmite’ of a film: you either loved it or hated it, with not much common ground in between!