Roger Brown is one of the most powerful headhunters in Norway. To support his extravagant lifestyle, he is also an art thief! 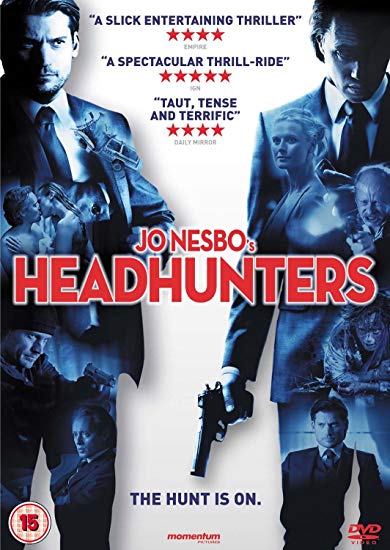 Jo Nesbo's 'Scandinavian noir' novel has been expertly transformed into a cruel and brutal thriller. Although indebted to American models, 'Headhunters' is firmly rooted in Scandinavian experience and it moves with the speed of a demented lemming heading for the cliff edge. Featuring tough, hard-drinking Oslo police inspector Harry Hole, ‘Headhunters’ is narrated by a secretive, self-conscious business executive Roger Brown, who has a beautiful blonde wife with a degree in art history. She’s high maintenance – partly clothes and partly the fashionable Oslo art gallery Roger subsidises on her behalf. Roger has a highly paid job as a headhunter, but more significantly, to pay for his extravagant life-style, he has a lucrative sideline in stealing works of art. Roger thrives in the vicious manipulative world of international commerce. However, a malevolent fate, in the form of Clas Greve, arrives to pursue the complacent anti-hero. With his brilliant antagonist on his heels, Roger goes on the run. The film explores dark social and psychological patterns, in the light of war, occupation, resistance and collaboration in the past and the clashes in the present between innovation, affluence, immigration and troubled socialist utopias.
Philip French - The Observer - April 2012
Morten Tyldum’s juggernaut thriller serves up a simple, but hugely satisfying idea: serve up an eminently loathsome central character, corporate player and part-time art thief Roger Brown, then sit back as he tangles with the wrong folks and is subjected to the most humiliating indignities this smart streamlined script can invent. It’s a timely film too; while the director gives the audience a good bracing shake, the script explores personal responsibility and the ways in which the relentless pursuit of wealth corrodes and corrupts. The film slots easily into the current anti-banker zeitgeist. However, the director has a firm grasp of his material. The plot moves like a rocket, the despicable characters are marvellously sketched and it’s deliriously entertaining.
Tom Huddleston - Time Out - April 2012

What you thought about Head Hunters

The Scandinavian thriller ‘Headhunters’ – based on a novel by Jo Nesbo – made for an entertaining and fast-paced start to the sixth society season. You found it ‘enjoyable, exciting and funny’, and it kept many of you on the edge of your seats. It was ‘very entertaining’ with ‘a good plot’, ‘thrilling action’ and ‘good acting’. There were several positive references to the dramatic pace and impact of events which, though ‘twisty and macabre’ were great fun. You liked the ‘intelligent direction’, the ‘fast moving quality and ‘near confusion’ at times as to who was treacherous and who was not. The film was complimented for its ‘verve’ and being a ‘daring mix of high drama and high comedy’ with plenty of ambivalence about the central character who is ‘humiliated but virtually indestructible’. The black humour and gripping action gave the film a ‘highly visual’ quality as it defied many conventions of the genre. It was, for one member of the audience, ‘completely over the top but hugely entertaining nonetheless’. The dramatic twists and turns made for ‘great escapist stuff!’ For another viewer it was ‘an exciting and roller coaster of unlikely twists and turns which I didn’t see coming’. All this praise was summed up by one member who consider it ‘100 minutes of ‘wow’’. However, there were other views. For some there was ‘too much gratuitous violence’, a ‘lack of plausibility between cause and effect’ and ‘a moral vacuum hiding extreme violence’. Another criticism was of ‘a lightweight slapstick combined with gruesome details’ and of ‘high level skills of acting and direction leading nowhere!’. Nonetheless a very clear majority of responses found the film good or excellent and establishing high hopes for the rest of the season.