Morris - A Life With Bells On

The film follows the fortunes of an avant-garde Morris team in their struggle to evolve Morris dancing. 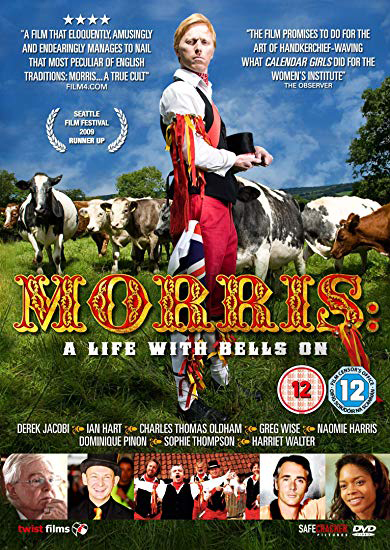 Lucy Akhurst’s labour-of-love mockumentary about an avant-garde Morris dancer, was shunned by distributors only to become a word of mouth hit on the UK folk scene: playing to packed village halls across the south-west and spotlighting what Richard Nixon might have called a ‘silent majority’ of older, conservative film-goers. At times, its gentle, nuzzling brand of comedy is akin to being gummed by a sheep. And yet Akhurst’s tale is obviously heartfelt and frequently charming. Cast and crew have produced something to be proud of.
Xan Brooks, The Guardian September 2009
“Morris is my life……I’d die for it”. Derecq Twist (Charles Thomas Oldham) is a quiet radical of the Morris dancing world, although you wouldn’t guess it from looking at this meek West Dorset tractor mechanic. Lucy Akhurst directs her first feature from a script by lead actor Oldham, whose mock-doc approach is straight out of the Christopher Guest mould. Its tough to maintain this brand of straight-faced comedy over an entire feature, but a kind-hearted approach to character and a warm attitude to its subject helps – along with the sort of daring that allows Akhurst to film Californian scenes in what looks suspiciously like Devon. Akhurst’s theatrical connections no doubt helped to lure such names as Jacobi, Walter and Wise to the party. Very funny - but rigorously so.
David Calhoun, Time Out September 2009

What you thought about Morris - A Life With Bells On

This was a film that sharply divided opinion. Over two thirds of those responding thought it was good or excellent, and the majority of these rated the film as excellent. However, it failed to charm a significant minority in the audience as nearly a fifth of responses rated the film as poor or very poor. Many members commented on how much they enjoyed the film: ‘A lovely way to spend the evening - thoroughly enjoyable’, ‘A lovely, affectionate, warm film’, ‘Elegiac. I loved it’, ‘Brill. More like this please’. The humour in the film was appreciated by many members, both the spoken and the visual jokes: ‘very clever very funny… some classic lines in it’, ‘worth seeing again to catch the dialogue I missed’, ‘excellent visual gags thrown in left right and centre’, ‘some real laugh out loud screen-play’, ‘crying tears of laughter’, ‘brilliant British humour’. Those who liked it commended the Film Society on its choice and asked for ‘more like this please’. The actors and the acting also merited positive comments: ‘enjoyably acted and realised’, ‘brilliantly conceived, acted and produced’, ‘a very deftly handled script and engaging acting throughout’, ‘great actors’, ‘well scripted and perfectly acted’. However, not everyone appreciated the humour: ‘I love British humour but this wasn’t funny at all’, ‘predictable, unchallenging and not funny’, ‘one of the unfunniest films I've seen’, ‘too many clichés’, ‘not very funny at all’. One of the reasons why members disliked the humour was they felt the film was too long and the central conceit drawn out too much. ‘An amusing idea that may have been sustainable for 30 minutes - over almost two hours it became predictable, repetitive and uneven’. . And as can be seen this film attracted a fair amount of negative comment: ‘That was so poor I can't be bothered to make suitable criticism’, ‘I squirmed and then fell asleep’, ‘I couldn’t sit through it ever again’, ‘You didn’t for a moment believe any of the characters’, ‘clumsy and plodding’. So, in summary a film that was loved and enjoyed by many and strongly disliked – the most disliked film this season - by a few.