15 yr old Oliver Tate has 2 objectives: to lose his virginity before his next birthday and to extinguish the flame between his mother and an ex-lover who has resurfaced in her life. 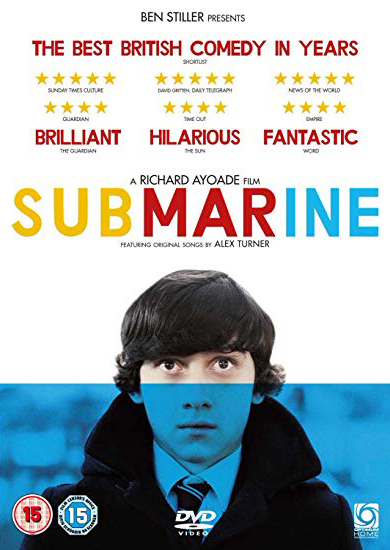 Richard Ayoade directs his debut feature film with great confidence and panache, building on his considerable T.V. experience. It's a dark, coming-of-age comedy about a lovelorn teenage boy in Swansea. Ayoade has absorbed many directorial influences but his style is really personal and confident, and for technique he can hardly be faulted. His film is shaped with flair, coolly allowing us to absorb its unrealities and to savour the emotional vulnerability of a teenager's life. Despite the sadness and loneliness of every single major character, the film runs essentially in a comedy groove. It is touching, sweet and most importantly, very funny. The star is Craig Roberts playing Oliver Tate, a dufflecoat-wearing loner, desperate to impress Jordana, a girl with some mild pyromania issues. There are complications between Oliver's parents who are experiencing a marital crisis with the re-appearance of Jill’s old flame, now a self-help guru who runs seminars. Throughout, Oliver maintains the stunned expression of someone who has been slapped in the face with a fish and rarely smiles. His father (Noah Taylor) has a face deeply incised with wrinkles and far older than his years. His mother (Sally Hawkins) is a repressed woman, with weird 'Thunderbird' mannerisms, for whom everything about her life is difficult. The movie will probably divide opinion. But it shows an undoubted confidence at carrying-off a visually distinctive, witty, autobiographical comedy.
Peter Bradshaw - The Guardian - March 2011
‘Submarine’, the debut feature by Richard Ayorade is as smart and self-conscious as its protagonist, a 15yr. old schoolboy named Oliver Tate. What happens to him – first love, family trouble, stray encounters with weirdness of the world – is far from trivial. The key to any coming-of-age story lies in calibrating the distance between how momentous certain experiences can feel and how normal, how usual, they really are. “I don’t know if I’ve come of age”, he says in a voice over “but I’m certainly older. I feel shrunken” Oliver must negotiate his own relationship with Jordana and an apparent crisis in his own parents’ marriage. The Director’s keen visual wit and clever knowing touches keeps it surprising and nimble, especially in the early scenes which are startlingly funny. He also catches the heady sense of sorrows and freedom of youth – reminiscent of Francois Truffaut in ‘The 400 Blows’.
A.O. Scott – New York Times - June 2011

What you thought about Submarine

Some critics of Richard Ayoarde’s directorial debut ‘Submarine’ predicted that it would divide audiences as to its quality. GFS members, however reacted with remarkable unanimity in finding it enjoyable and perceptive. You found it “funny”, “touching” and “sad”, “catching the mood of adolescence perfectly”. It was “poignant and quirky” in its humour and “adventurous and innovative” in its way of telling a story. There was enjoyment of “the journey the central character Oliver experienced, and of the teenager/parent interaction” Several of you felt that it was “beautifully observed”, in particular the “subtle interplay” of character and “the seascapes which created a powerful emotional mood”. There was “real comedy combined with painfully poignant moments” which for more than one member brought back “cringing, bitter-sweet memories”. The director showed great skill in making the film “sad and uplifting” at the same time and in adding an element of unpredictability so that there was “pleasure in not knowing where the story was going”. You praised the performances, especially those of Craig Roberts (Oliver) and Yasmin Paige (Jordana) and their ability to create moments of “wonderful embarrassment” and “great tenderness” as part of “teenage angst”. There were reservations, of course. Some found it only funny in parts and “not much that was original or inventive”. For another member, it was all too “weird and surrealistic” and a mixture of being both “too clever and too obscure”. Some comments suggested that the sequence of events was difficult to follow and that portrayal of events in the classroom were unlikely and implausible. Despite the evident enjoyment of the film overall, nearly all responses made a reference to very poor sound quality and that this had, to a greater or lesser extent, detracted from the quality of the film.