A humorous and feelgood film to end the season!

A rich quadriplegic, living in a mansion in Paris requires a live-in carer. A young offender, not expecting to get the job, is surprised when he does. The lives of both men are enriched as they develop a close friendship and have lots of fun. 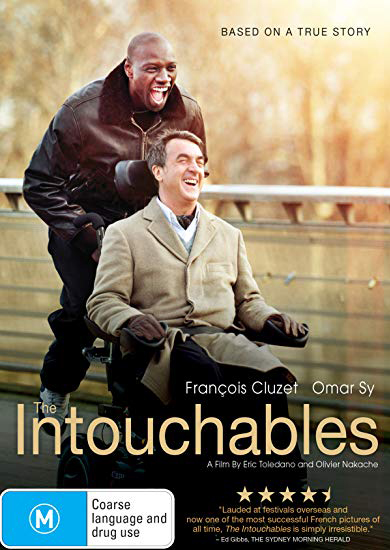 The midnight car chase which opens up this odd-couple buddy picture is fresh and unpredictable. It is a smart opening hook for the audience, a sequence which piques curiosity about two men in a speeding Maserati, a seemingly mismatched duo whose bond clearly runs deep. In this feel-good saga of an ultra-wealthy quadriplegic and the petty criminal who becomes his caretaker, the chemistry between the two lead actors is crucial to the impact of the film. Basing their dramatic comedy on a real-life friendship, writer-directors Olivier Nakache and Eric Toledano have achieved a remarkably wide appeal. ‘Intouchables’ was France’s most-watched film of 2011. The charismatic Omar Sy received a Cesar (France’s Oscar equivalent) for his breakout performance as Senegal-born Driss, a young man of indefatigable exuberance, despite his recent jail stint for robbery. When he applies for the job of caretaker to Philippe – played with incisive restraint by Francois Cluzet – he simply wants a rejection so he can collect his government benefits. But the middle-aged widower, permanently injured in a paragliding accident, warms to Driss’ impropriety and especially his lack of pity. Philippe chooses Driss over better-qualified candidates and events are underway
Sheri Linden, Los Angeles Times May 2012
Omar Sy, of ‘Intouchables’, won France’s version of the Oscar for his role as an ex-convict from a housing project outside Paris, who becomes the improbable but perfect caretaker for a wealthy, paralysed aristocrat, played by Francois Cluzet. It is, first and foremost, a film about Philippe whose paragliding accident left him with no feeling from his neck to his toes. He needs a caretaker with physical strength, who can lift him from bed to car, who can respond to his panicked breathing in the middle of the night when phantom pain strikes. What he doesn’t need, or certainly want, is pity which is why the wealthy Parisian picks the most unlikely applicant to be his aide. Driss is a streetwise native of Senegal, who expected an instant rejection of his application, which would qualify him for state benefits. Instead, he gets a job, a look at how the one-per-cent lives, a luxurious bedroom and private bath and an education. Philippe, for his part, is given a second chance at life, the ability to indulge his love of speed again and to see Paris at night. This dramatic comedy is anchored by two excellent performances, one big, one contained. Omar Sy’s performance is larger than life, whether smiling, flirting, dancing, treating Paris streets like a race track, issuing threats or rolling dice with police officers. Francois Cluzet’s acting is all about his eyes and he has a remarkable tool at his disposal. This is a life-affirming film, rooted in hope, friendship and humour.
Barbara Vancheri, Pittsburg Post-Gazette June 2012

What you thought about Intouchables

These are the most remarkable response figures for what was clearly a most remarkable film. This, the most watched film in France in 2011, clearly warmed the heart and pleased the sentiments in Godalming. There were many tributes: “wonderful, moving and hilarious”, “funny, touching and memorable”, “such joy and so much life in adversity”, “truly heart-warming”, “beautiful, moving and funny too”. Some responses emphasised the originality, “a totally original film, which seemed not to obey any of the ordinary rules about plot but to grow and move in its own unique way”. Other responses admired the “courageous unsentimentality” along with “the great pace and human feeling”, and the “great honesty” constructed by the “brilliant script”. There was great praise, throughout the responses, for the superb acting of Omar Sy as Driss and Francois Cluzet as Philippe and the quality of the rapport between them. One member of the audience was particularly complimentary about the music “perfect, perfect, perfect” and another was moved into French “J’adore”! Many of you also felt that this “warm, flawless and uplifting film” was a perfect way to end the season, “a fantastic finale”!