A Day In The Life - Four Portraits Of Post-War Britain

A collection of four unassuming and quietly magnificent short documentaries. These 'four portraits of post war Britain' are precious little gems. They show a slice of life that was on the cusp of significant change. 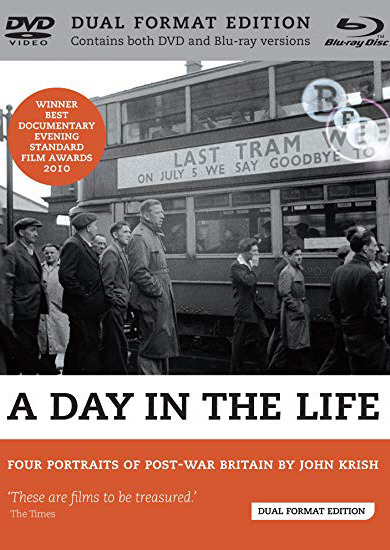 This magical history tour will be one of the year’s filmgoing highlights for all those lucky enough to see it. With this small gem, the under-recognised John Krish (b.1923) should be added to the leading lights of British documentary film-making. ‘A Day in the Life’, four portraits of post-war Britain, furnishes ample proof of his resourcefulness and artistry. A prime example is ‘The Elephant Will Never Forget’ commissioned in 1953 to commemorate the closure of London’s tramways It shows the trams in their dying day, depicting an elderly couple taking their last shilling-all-day ride around town. The music-hall song ‘Riding on Top of the Car’ accompanies this farewell to an era, capped with haunting images of charred tram carcasses after their demolition. ‘They Took Us to the Sea’ (1961) and ‘Our School’ (1962) focus on childhood experience with wry compassion and humour. The last film ‘’I Think They Call Him John’ is a heartbreaking portrait of a widowed St. John’s Wood war veteran going about his solitary daily rituals designed to call attention to the indifference of British society towards its elderly. The crystal-clear social agendas Krish was exploring have an emotional pull that time has only made more poignant.
Tim Robey, The Daily Telegraph April 2010
The British Film Institute has re-released this quartet of short films from the 50’s and early 60’s about British public life by documentarist John Krish. They are heart-stopping social-realist monochrome visions of the way we lived then and immersing yourself in these beautifully photographed and sparely related films is a fascinating experience. Britain looked pinched, starved, a little depressed – more than ready for the Beatles first LP. ‘The Elephant Will Never Forget’ (1953) is an elegiac farewell to the London trams. ‘They Took Us To The Sea’ (1961) is a record of an NSPCC sponsored day out at the seaside. ‘Our School’ (1962), a portrait of the classroom style of teachers at a Hertfordshire secondary modern and ‘I Think They Call Him John’ is a desperately sad picture of a widower’s life, with all its silent loneliness. This piece contains Krish’s brilliant remark that the old are like “an army of strangers we have no intention of joining”.
Peter Bradshaw, The Guardian November 2010

There was a substantially positive response to John Krish’s 4 documentaries about life in post-war Britain. For many, they were “fascinating and illuminating trips down memory lane” combining “pathos, social history and what seems like a remote past”. The films were an enjoyable blend of “sensitivity, poignancy and social observation” making points about society and social change in a “subtle and indirect way” while “encapsulating values and ideas” of the 1950’s. You admired the “skilled and thoughtful construction and editing” of the documentary film maker, capturing the atmosphere of life in Britain. It was, for some viewers, “a welcome change from modern razzmatazz” with “penetrating hindsight” portraying feelings from down-to-earth pleasures (Our Day Out) to “haunting loneliness” (I Think They Call Him John). Some responses expressed specific reactions to individual films: some found ‘The Elephant Will Never Forget’ “sharply reminiscent of a lost past”; and another view was that ‘Our School’ while fascinating was “too stage managed” to be entirely convincing. Conversely, another viewer found ‘Our School’ “remarkably moving, bringing back many memories of schooldays in the 1950s” There was for many of you a sadness mixed with open nostalgia both for a lost world and a realisation of the extent things have not changed. In several responses there was general praise for the inclusion of a documentary in the season and the suggestion that it might be a regular feature. One response summed up the attitudes of those who enjoyed the films, “remarkable film making, each one touching and interesting, with many a nostalgic memory”. There were, as ever, alternative views – “well made but more useful for a social historian than a general audience”; “tedious and the school positively embarrassing”; “colourless, reflecting a colourless period, uninspiring, tedious”. They were for some “a bit slow paced and grim” and “with the exception of ‘Our Day Out’, very, very dull” There were twelve specific references to the short ‘Eight’, nine positive and three negative.