The Kid With A Bike

Abandoned by his father, a young boy is left at a state-run youth farm. In a random act of kindness, the town hairdresser agrees to foster him on weekends. 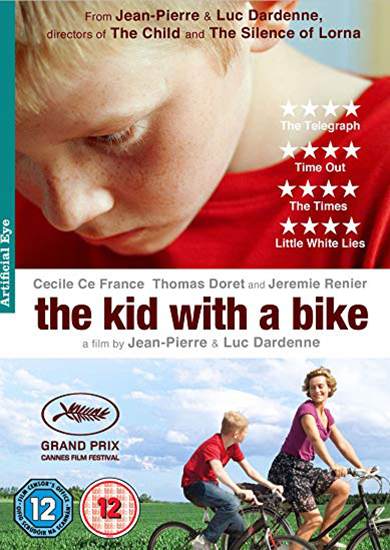 The Dardenne brothers have established their own particular geographical area, working-class small towns in post-industrial French-speaking Belgium, where they explore a familiar series of themes and situations which inevitably arise from this milieu. Their ellipitical and carefully observed films dig deeper and find new things to say each time and ‘The Kid with a Bike’ sees them in good form. The title has echoes of ‘Bicycle Thieves’ and the kid is the ginger-haired, fiery tempered eleven-year-old Cyril, whose thoughts are never far away from his bike. His single dispirited father dumps him in a children’s home, taking his own and Cyril’s bike with him. Cyril can’t believe his father sold the bike. When he gets it back, it’s stolen again, which brings him into the orbit of a local gang. There are touches of hope and redemption in the film, and, in an act of providence Cyril finds a loving protector in Samantha, a hairdresser. She takes him in, puts up with his tantrums and restless violence, gives up her lover for him, protects him from jail and provides unconditional love. Such altruism and human decency provide a moving and sunny conclusion.
Philip French, The Observer March 2012
The films of the Dardenne brothers are defined by their short sharp shocks of comparison and wisdom. The stories are direct, contemporary, shot in a frank and realistic style, with energetic unfussy forward momentum. They exert a strong moral kick, without overplaying any obvious themes. ‘The Kid with a Bike’ lands us in a suburb of Liege, home to the marginalised, and the kid is Cyril, a bruised 11-yr-old, desperate to find the dad who has abandoned him to social services. Cyril is desperate for attention and eager to please, even if it means misplacing his loyalty in his errant father or a local crook. He’s a fascinating character, instantly recognisable, brought to life with a near heart-breaking vulnerability. As Cyril dashes about - constantly running or cycling – he falls into the protective arms of a hairdresser. Together they encounter the boy’s father who makes it depressingly clear he doesn’t want to know his son. Samantha agrees to foster Cyril but a false friendship with an older boy threatens to throw him off the rails for good. The innocence of children and their capacity for good in a corrupting adult world are interests to which the Dardenne brothers keep returning. Cyril impresses us with impressive grace and maturity and the film finally endows him with both dignity and strength. This is a big-hearted film far more complex than at first you expect.
Dave Calhoun, Time Out 2012

What you thought about The Kid With A Bike

‘The Kid with a Bike’ was very popular, with its combination of excellent acting and strong compassion and understanding. You found it “challenging and rewarding”, “very moving”, “very real and personal”, “a very fine portrayal of a messed-up boy” There was strong praise in all the responses for the two central performances, Thomas Doret as Cyril and Cecile de France as Samantha, both completely believable and grounded in a well-observed social world. Several responses welcomed the film’s “social realism without tedium” and the “real-life feel” of the central characters, Samantha in particular was a “perfect guardian angel”. One member was particularly moved by the bike ride and picnic towards the end of the film, which provided “a cameo of relaxed happiness, rarely achieved on film”. Several of you detected a note of sadness in the film, not in the outcome but in the waste and unhappiness in Cyril’s life”. This touching quality was a strong element in the film, as was the “refreshing optimism” and “uplifting quality” in the film’s conclusion. There was scarcely a dissenting voice, although one comment felt that the character of Samantha was not given sufficient depth and no real explanation for her decision to take Cyril on. For another member the film had “excellent acting but promised more than it delivered”.