A tale, beautifully told, of an Algerian immigrant hired to replace a popular teacher who committed suicide. While helping his students at a Montreal school deal with their grief, his own recent loss is revealed. 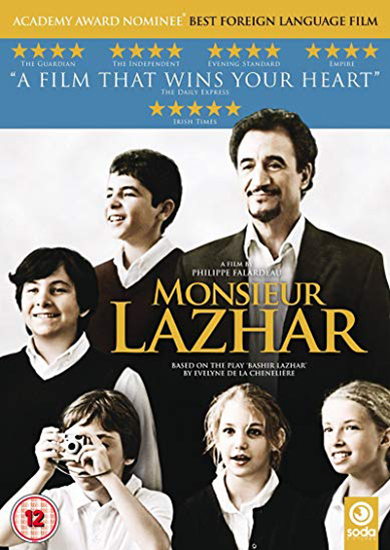 Briefly described, ‘Monsieur Lazhar’ sounds like a highly contrived movie. An asylum-seeking Algerian restaurateur, whose wife and family have been killed by terrorists, passes himself off as a teacher to help the staff and pupils of a francophone school in Montreal come to terms with the suicide of a troubled female teacher. In fact it is a serious unsentimental film of real insight into loss, grief, exile and the true meaning of education. Fellag, a prominent Algerian actor, imbues the compassionate, indomitably cheerful Bachir Lazhar with a deep humanity. Lazhar is a man of tact, probity and a rich sense of humour. His understanding of his mixed class of 11 year olds and their problems is palpable but there is no immediate or magical transformation and the mutual healing process is gradual. The end sends you out of the cinema in a positive frame of mind, but it’s neither triumphalist or unrealistic. Some teachers will learn from it. All teachers will find it a re-affirmation of their vocation
Philip French, The Observer May 2012
‘Monsieur Lazhar’ conveys the delicate reality of human emotions in an engaging and affectionate way. This Oscar nominated film shows how an Algerian supply teacher, in French speaking Montreal and his pupils help each other confront a range of weighty issues and themes – guilt, grief, community and love. The Algerian born French actor, Mohamed Fellag, sets the tone of the film with a sure and empathetic performance and ensures that nothing we see is less than direct and sincere. Initially Monsieur Lazhar is consumed by finding his feet in the classroom, with his 11-12 year old pupils. His ideas about grammar and desk arrangement are decidedly old school. The dictation he has the students write is too hard for them and he is uncertain about the zero-tolerance for touching policy, that a colleague says makes teaching “like dealing with radioactive waste”. As we gradually find out, however, Lazhar has crises of his own to deal with, a fraught history which has made him emotionally fragile. What is most effective about ‘Monsieur Lazhar’ is the natural unforced way these two sides of the coin, the teacher and the students, help each other cope with the different but related issues of memory, regret and the healing that they face.
Kenneth Turan, Los Angeles Times April 2012

What you thought about Monsieur Lazhar

Monsieur Lazhar gained overwhelming approval. Two thirds of members who responded rated it as ‘excellent’. Two fifths rated it as ‘good’ and member rated it as average. No-one who responded thought it was poor. Members found it a powerful, sensitive and moving film. Comments included: ‘very moving’, ‘powerful’, ‘thought provoking’, yet ‘understated’ ‘subtle and moving’; ‘the best film I’ve seen in ages’, ‘complex and beautiful’, ‘well-crafted’, ‘a beautiful ending’, ‘a most beautiful experience’. ‘It covered so many themes – death, suicide, asylum, refugees – with great sensitivity’. ‘A film of great integrity and charm’. ‘A very realistic depiction of school life’. ‘Restrained and quietly dealing with difficult issues and emotions’. ‘A touching story with a gentle ride of emotions’; a ‘sensitive approach to trauma’. The acting in the film was particularly praised by members, and especially that of the children, who showed the class as individual ‘personalities’. ‘Sustained high quality of acting throughout’. There was praise also for the main lead: ‘a tour de force by Fellag’, ‘Mohammed Fellag is an affecting actor’, ‘his grief was very well portrayed’,‘wonderfully under played’. The film was directed with ‘great economy – not a wasted word or … gesture’. ‘Well paced… I didn’t sleep but I did cry’. Members noted the relevance of the film today – both for the asylum theme ‘very pertinent for what is happening in several countries in 2012’ and for issues even closer to home: ‘(it) asked as many questions as it answered’, ‘a thought provoking angle on many current issues’. One member commented on the ‘dimension we have lost in the strictures imposed on the education system’. Some members wondered where the hope was to be found: ‘he resolved his “demons” but lost his job and the kids lost their teacher; Simon has hope but Alice was devastated’. Several members commented positively on the Film Society’s choice ‘This was why I joined the film society’, ‘more of the same please’, ‘best film of the season so far’.‘ Less positive comments were that the film was: ‘a bit predictable’ ‘a bit of a cliché to depict the “exotic” foreigner as being closer to his emotions than “sophisticated” westerners’, ‘could have done with a more positive ending’. Overall this was a film enjoyed and highly commended by members. No narcoleptic episodes this time but at least one member was moved to tears.