Received the Oscar for Best Foreign Language Film . A married couple are faced with a difficult decision to improve the life of their child by moving to another country or stay in Iran and look after a deteriorating parent with Alzheimer's disease. 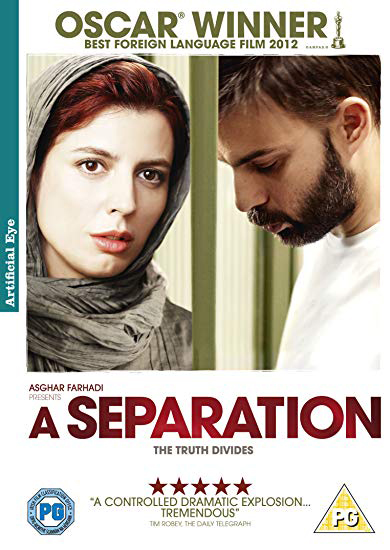 ‘A Separation’, a tightly structured, emotionally astute new film from Iran, begins with a couple at odds and in distress, arguing in front of a judge. Simin wants to leave the country with her daughter and her husband, Nader, insists on staying in Tehran to care for his frail and elderly father, who suffers from dementia and needs constant attention. Quite possibly there is more at issue than practical domestic arrangements but an Iranian courtroom may not be the best place to discuss intimate marital matters. ‘A Separation’ (Iran’s official Oscar submission) is a rigorously honest movie about the difficulties of being honest and the slipperiness of truth. It sketches a portrait – perhaps an unnervingly familiar one for American audiences – of a society divided by sex, generation, religion, and class. The partial split between Nader and Simin is only one of the schisms revealed in the course of the story which shrewdly combines elements of family melodrama and legal thriller. Nader and Simin find themselves at an impasse. She goes to live with her parents and he hires a young woman, Razieh, to look after his father. As Nader’s life descends into outright chaos, because of Razieh’s unreliability, Nader is back in court embroiled in long arguments with Razieh and her husband, an unemployed shoemaker, laden with debt and seething with resentment and humiliation. The film is remarkably deft in capturing the petty, cumulative frustration of modern city life – the quarrels and brooding silences, the Tehran traffic, a chaotic government bureaucracy, a daily life cycle of waiting, nagging, negotiating, but much of it carried out with a frayed and weary decorum. The film leaves us with a knot of ethical and philosophical questions that invite endless interpretation of every aspect of the story.
A.O. Scott, The New York Times December 2011
Over the past quarter century, Iran has produced some of the best and most artful filmmakers anywhere. They take us inside the Iran we almost never see. No Iranian film has done this more successfully than ‘A Separation’, a domestic drama, astonishingly gripping, which grabs you like a crackerjack thriller. The story begins with a plea for divorce before a judge but spins off in unexpected directions. Upper-middle-class Nader hires a devout working-class woman, Razieh, to look after his father. But Razieh hasn’t asked her traditionalist husband for permission to take the job. Events escalate, the authorities get involved and through a series of plot twists, we see many things in a whole new light. What makes the movie so good is that you never feel as though you’re watching a sociological tract. You’re watching living, breathing characters, who turn out to be far more complicated than you first think they are. Nobody is a villain. Everyone has their reasons. Farhadi, the director, turns the story of one couple’s collapsing marriage into a vision of an entire society.
John Powers, Movie Review January 2012

What you thought about A Separation

There was a warmly appreciative response to ‘A Separation’, neatly summed up in one response as “a tangle of a thousand and one versions of truth”. Many of you enjoyed the “taut and complex interconnection of events”, “the unravelling and spiralling out of control” of what appeared at the outset to be simple marital disharmony. There was a common recognition of the power of the film, through the acting and the cinematography and the “tension of domestic events”, and the extent to which it provided illumination about Iranian society which is, by and large, closed to a UK (or USA) audience. Several responses indicated that the complexity of the film carried its own message about how we over-simplify other societies. The “totally absorbing and surprising” structure of events made for “compelling cinema”. Another “absorbing strand” was the development of Termeh, the daughter, as “she tried to make sense and choices in the adult world”. The film struck several of you as “entirely believable”, “courageous and realistic” in its depiction of a different legal system and the varying versions of events and responsibilities. The film’s “realism and complex storytelling” was also admired for its “lack of sensationalism” as well as for its “intensity”. One member of the audience saw the film as “a gripping and engaging essay in stubbornness” and another, through the “range of excellent performances”, “a subtle trip through a moral minefield”. There were a few dissenting voices in this otherwise appreciative audience response. Some considered it “overlong and too wordy”, another “too deadpan and oppressive” and for one viewer, it was “a bit of a soap but very well done”. Another viewer commented that “too many of the twists were implausible” which made the film “entertaining but not very convincing”. There was no doubt overall however, that ‘A Separation’ was perceived as a highly compelling, distinguished and truthful piece of film-making.