An extremely successful comedy animation that is a tale of a friendship between two unlikely pen-pals. 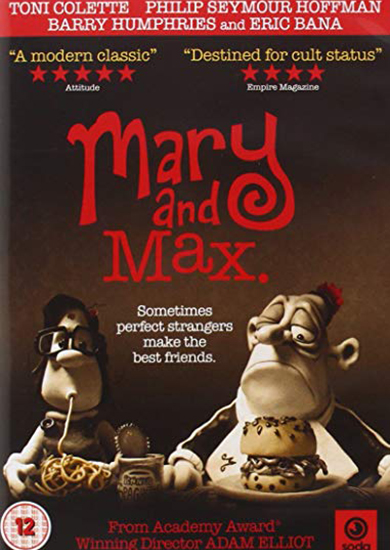 Beautifully animated and brilliantly written, this is a wonderfully directed black comedy that is simultaneously darkly funny, extremely sweet and incredibly moving. The film begins in 1976, with 8 yr. old schoolgirl Mary, deciding on a whim to write to someone in America to find out whether babies really do come from the bottoms of bear glasses, like her recently deceased grandfather told her. Picking a name at random from the phone book, Mary ends up becoming pen-pals with middle-aged, overweight New Yorker Max Horowitz, who is eventually diagnosed with Asperger’s Syndrome. They write to each other over a period of 20 years bonding initially over their shared love of chocolate. The animation is beautifully done and Elliot uses colour in interesting ways – the Australian scenes of nostalgia-tinged sun-bleached brown, while New York is entirely blacks, whites and greys, except for red lipstick. The script is excellent and the voice work is exceptional. ‘Mary and Max’ is a delight from start to finish – darkly funny and deeply moving.
Matthew Turner, View London October 2010
‘Mary and Max’ is an ambitious, odd, unlikely and at times grotesque, animated film from Australia. The two principal characters are an unloved and unregarded kid from Melbourne – Mary- and a heavyset, middle-aged New Yorker with Asperger’s Syndrome - Max. They become pen-pals after Mary’s random encounter with a telephone directory. Their exchange of letters swiftly emerges as the emotional lifeline for their unhappy existences. All this is rendered in monochromatic claymation, where only occasional colours stand out. The voice cast is impressive, including Toni Collete, Barry Humphries and Philip Seymour Hoffman. Some of the switches in tone are jolting, but you have to admire the ambition and creativity of the film.
Andrew Pulver, The Guardian October 2010

What you thought about Mary And Max

The Australian animation, ‘Mary and Max’ was enjoyed and appreciated by the great majority of the audience, so much so that a number of responses just used one word, “brilliant”. There were, of course, plenty of elaborations too, focusing on the intelligence and emotional qualities perceived. The film was “touchingly accurate”, “warm and human”, “created mood and emotion” and “used music in such a clever and thoughtful way”. It also had the quality to depict “the frailty of the human condition” through “subtle animation and great sensitivity”. Many of you praised the film’s “quirky originality”, its “clever script” and its “profound reflections” as well as its “sharply observed black humour”, while tackling “a very real and difficult problem”. Although “harshly realistic” in places the film was never “negative and misanthropic” but rather “moving poignant and compassionate”, dealing sympathetically with loneliness and Asperger’s syndrome. The “amalgamation of humour and pathos gave a keen insight into desperate lives”. In several of the responses there was great appreciation of the quality of the voice work – Barry Humphries as the narrator and Philip Seymour Hoffman as Max in particular. The length of the film was a common criticism, however, within the overwhelming positive response. For a number in the audience the film was too long, despite its qualities and lacked urgency in the storytelling. For some, the film lacked conviction and while worth showing, was mainly of curiosity value. In another comment, it did not get beyond sentimentality despite clever and effective animation. It was, on the negative side, “a bit depressing” and “confusing” in its mixture of humour and pathos.