During the 1st World War, two French soldiers are captured and imprisoned in a German POW camp. After several escape attempts they are sent to a fortress from which it seems impossible to escape. A classic anti-war film. 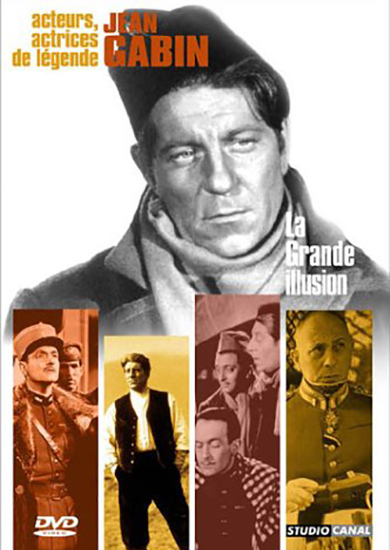 Jean Renoir’s drama about the demise of Old Europe is not only hugely important in film history - it was the first foreign language movie ever to be Oscar nominated for Best Picture – but is also a sorrowful, acutely thoughtful and wholly imperishable masterpiece. Renoir’s drama about First World War fortunes holds up sublimely: better even than ‘La Regle du Jeu’ (1939) which is more often called his crowning achievement. The friendship forged between Pierre Fresnay’s French captain and Erich Von Stroheim’s refined German commandant, lends a love of humanity as vulnerable as it is profound. The feelings between Jean Gabin’s escapee mechanic and the farm widow Elsa, have all the purity of a great silent romance
Tim Robey, The Daily Telegraph, April 2012
The ‘grande illusion’ of Jean Renoir’s great film referred originally to the British author Noramn Angell’s belief that the supposed financial advantage of war is a falsehood. For Renoir, this illusion evolves into something more complex and various, and so does it’s tragic and ironic grandeur. The idea that wars can be fought according to gentlemanly rules is an illusion – like the belief that the 1914-1918 conflict was the war to end all wars. Erich Von Stroheim is Captain Von Rauffenstein, a German POW camp commander in the First World War, ramrod straight in his uniform with white gloves that conceal horrendous burns from when he was shot down in combat. He pursues an elaborately civilised policy of martial respect for his distinguished prisoner Captain de Boeldieu (Pierre Fresnay). But he’s disdainful of Boeldieu’s more plebeian comrades Rosenthal - petty anti-Semitism is never far away - and the boisterous Marechal, played with luminous masculinity by Jean Gabin. A vividly humanist anti-war classic.
Peter Bradshaw, The Guardian April 2012

What you thought about La Grande Illusion

The first `classic’ of the season, Jean Renoir’s 1937 La Grande Illusion received a warm and appreciative response with more than 95% placing it in the excellent or good category. Many noted the `poignancy’ and `tragic overtones’ of the film given its production on the eve of the Second World War. The film was a `tour de force’, an `astonishing achievement for the time’, focussing directly on the `needlessness of war’. It was `very moving’, `full of plot, character and ideas’ and several responses commented on the effectiveness of the relationship between Captain Boueldieu and the German officer Von Rauffenstein, as symbols of an older, dying, aristocratic Europe. For several viewers there was the reflection that `nothing changes’, although paradoxically, finding the film full of touches of humour. One member was moved to see `humanity shining in the swamp and degradation of war’, and several comments highlighted the `compassion and humour’ at the heart of the film, and the `lightness of touch when addressing highly emotional subjects’. One member found `subtle and intelligent ironies throughout , starting with the title itself’, and another found the concluding sequences `very moving, given what we know happened in 1939’. In almost all the positive responses to the film were tributes to the quality of the acting of Jean Gabin (Marechal), Pierre Fresnay (Captain de Boueldieu) and Erich von Stroheim (Captain von Rauffenstein). There were less enthusiastic voices: `enjoyable but dated’, `too much stereotype in the characters’, and `far too long’, were critical comments. One member asked rhetorically `was it a POW or a holiday camp?’ and another found it `boring, boring, boring’. Overall, however, the film was a great success with members , and as one commented, `the kind of film one joins a Film Society for’.