The Man Without A Past

The story of a man who arrives in Helsinki and gets beaten up so severely he develops amnesia. He starts living on the outskirts of the city and slowly puts his life back on track. 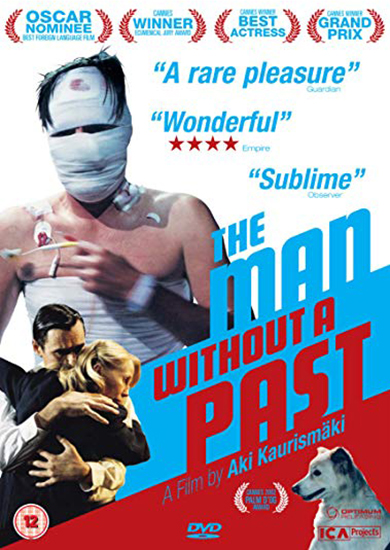 Aki Kaurismaki, arguably the most distinguished of Finnish directors, returns with a downbeat comedy. The main character ‘M’ (Markku Peltola) is the victim of a vicious mugging and declared dead at the hospital. Amazingly he recovers, but cannot remember any aspect of his former existence. He discharges himself from hospital and clad in bandages, is taken in by a poor family living in a converted shipping container. Bereft of a past, he chooses to build a new future for himself and he does so with Kati Outinen, Salvation Army volunteer. It’s impressive stuff from the director, who creates a warm and human tale set against his nation’s blighted economy. The style is static, almost theatrical as minimal action and dialogue chronicle M’s continual misfortune. His expressionless determination becomes increasingly funny as he greets each new setback with a cigarette and the barest of shrugs. As the unfortunate amnesiac, Markkhu Peltola is the epitome of wordless stoicism. ‘Man Without a Past’ has a remarkable off-beat and quirky quality and is another splendid example of Kaurismaki’s unique European cinema.
Martyn Glanville, BBC Film Review 2003
The title character in Aki Kaurismaki’s lovely new comic fable ‘The Man Without a Past’ certainly does his share of suffering. A metal worker who arrives in a strange city by train, he is brutally assaulted and left for dead on a park bench. His face shrouded in bandages, he stumbles out of the hospital, when he comes to, finds he has lost, in addition to his money and shoes, his ability to recall anything about his previous life. This estranged, and set adrift, man (M) is also liberated. He finds a new life on the margins of society, friendship among the homeless and destitute, a home in an abandoned shipping container and love with a melancholy Salvation Army worker, Irma, who ladles out soup and listens to rock and roll with an almost religious devotion. The characters have an air of forlorn impassivity and reveal their oddball passions and their dignity – there is an amiable drinker and a security guard who is landlord of the shipping container shantytown. The Director is enamoured with the past, with old music and older movies and communicates a vision of resilience and nobility in hard times but without sentimentality or speechifying. The film is at once artful and unpretentious, sophisticated and completely accessible, sure of it’s authority and generous in it’s vision.
A.O.Scott, New York Times 2002

What you thought about The Man Without A Past

There was a warm response to Aki Kaurismaki’s ‘downbeat comedy’ with 46% of responses rating it as excellent and 42% as good. The two most common descriptions of the film were that it was ‘quirky’ and ‘enjoyable’. It was ‘another quirky gem that maintained the very high standard of this season's selection. A wonderfully observed, wonderfully acted peaceful film.’ A ‘quirky and touching portrayal of humanity on the fringes of society.’ The plot and how it developed came in for considerable praise. ‘A well developed plot, nicely paced’. The film depicted a bleak reality but ‘despite the tragedy of loss of memory and extreme poverty, there was a sense of hope’. Members found it heart-warming that ‘shortcomings do not prevent a good man winning through’. There were ‘a beginning, middle and a proper finish to the story’ and a moral tale. ‘The humanity of those with nothing to someone who has even less was revelatory’. Many members commented favourably on the humour in the film, often understated as it was. ‘Humour lightened the film and surreal moments like sushi and sake on the train’; ‘I loved the black humour’. The film was a ‘wonderful balance of pathos and humour. So much conveyed very often by so little’. The social comment in the film was also generally well received as it gave ‘a different perspective on alternative living’ and ‘provided a rather different perspective on Finland than that normally presented. Not the sophisticated social democracy we are led to believe’. This focus on the ‘beguiling … container universe’ gave a new view so ‘the dead-pan delivery with most of the social veneer stripped away made one see things really differently’ and the counterpoint between the characters’ circumstances and their behaviour showed ‘the ugliness and beauty of the underprivileged and how the destitute can have the greatest morality’. The acting was liked, ‘A wonderfully observed, wonderfully acted peaceful film’ and again the understatement was seen as a positive ‘The acting was by facial expression. Yet the lack of movement was not missed’. However, only one performance and performer stood out for the audience – Hannibal the attack dog was ‘the best character actor’. Some members were less enthusiastic. Some disliked the ‘minimalist emotionless dialogue’ and the bleak setting. ‘The Man Without a Past was all just rather bleak, harsh and cold.’ The acting was criticised by some as ‘lacking but was this supposed to be the comedy?’ or as ‘Poor and wooden’. Overall however members felt this film represented a maintaining of the Society’s high standards.