A satisfyingly different film. Walker, a reclusive and disenchanted academic, returns to his New York apartment to find it has been illegally sublet during his absence to a Syrian man and his Senegalese girlfriend. Deciding he cannot leave the couple wandering the streets he allows them to stay and strikes up a friendship with the young man who is a musician. Then the immigration authorities intervene! With plenty of charm and black humour, the film takes a hard look at post 9/11 America. 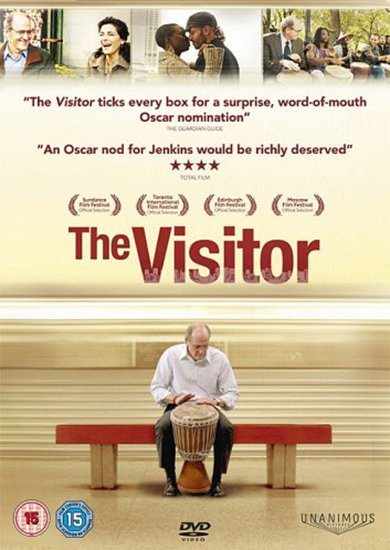 Solitude plays a major part in Thomas McCarthy’s latest film, which has an impressive central performance from Richard Jenkins. Jenkins, a character actor best known for TV work in the USA, plays Walter, a widowed professor of globalisation based in Connecticut, whose job and indeed life, offer him very few challenges. On a trip to his apartment in New York (where he is to give a paper), he discovers a young couple in his flat: he has been away so long it has been illegally sublet. After some initial misunderstandings, Walter makes friends with his visitors, a Syrian man and his Sengalese girlfriend, learning to play the drums with his new flatmate and beginning to turn his life around. When the authorities intervene to question the residential status of the two foreigners, Walker's newfound happiness is threatened. Although this may sound bleak, it isn't. McCarthy, who wrote the script, injects plenty of charm and black humour, and the talented cast make it easy to watch. In particular, Jenkins, in a leading man debut, delivers a fascinating performance. Intelligently critical of the new society America has created since 9/11, the film is satisfyingly different, thought-provoking and rewarding.
Paul Hurley - Tiscali's Film Review - 2008
U.S. policy on illegal immigrants in a post 9/11 world provides the unlikely subject of the light comedy drama. In Director Thomas McCarthy's new film The Visitor, Richard Jenkins stars as Walter Vale, a grouchy widowed academic, whose sour credentials are established early on when he refuses to accept late assignments from students who claim they have 'personal issues' to deal with. Obliged to attend a New York conference and present a paper he was barely involved in writing, Vale huffs off to his vacation apartment and finds that it has been let to two immigrants by a dodgy landlord. Deciding he can't leave the couple wandering the mean streets, Walter allows them to stay and swiftly strikes up a friendship with the jovial Terek, learning drumming techniques from the young musician and generally unwinding from his uptight lifestyle. The film turns serious when Terek is carted off to a detention centre, leaving Walter to provide support and find a lawyer. The second half of the film sees Walter go from burgeoning jazz hep-cat to outraged moral citizen, reminding us that there's a human story behind all internments. The four leads all give winning portrayals, in this perfectly balanced movie, which delivers a serious message in a lively, charming and thought-provoking manner.
Jim Hall - Channel Four Film Review - 2008

What you thought about The Visitor

The responses show that the audience enjoyed many aspects of this 'subtle and sensitive film', as the 'unlikely hero' encountered aspects of the world and himself which he had not previously known. The impact of politics, law and their indifference to human feelings struck several people - 'close to the bone – this situation is happening in many countries, including UK, every day'. Yet part of the film's appeal and subtlety was the warmth with which 'tragic and funny events' were portrayed. The 'gentle pace and gripping action' made many points about loneliness, about 'innocent people disappearing without explanation' and about ideas of justice and security in post 9/11 America. As one viewer sardonically remarked 'so much for the land of the free'. Many of you felt that the film achieved a great deal through understatement, matched with realism – the bleak ending, avoiding sentiment, striking several in the audience with its honesty and directness. There was wrm and generous praise for the central performances and in particular. Richard Jenkins as Walter. 'What an actor', 'a specially good performance by Richard Jenkins', 'perfectly pitched performances', 'most moving performances from the four central roles'. Several responses showed pleasure in seeing the Palestinian acteress Hiam Abbass, for the second time. This clear, gentle, thought-provoking film was felt by a large number in the audience, to have been very worthy of inclusion in our season's programme.