This warm-hearted comedy was a well deserved Oscar nomination for Best Foreign Film in 2002. It deals with the lives of two men—gentle, sensitive, middle-aged Elling and huge, doltish Kjell - who have been friends and room-mates in an asylum and who are moved into a state-owned apartment with the support of their social worker. There is much to enjoy in the film which has some hilarious scenes but no syrupy sentimentality and no clichés. 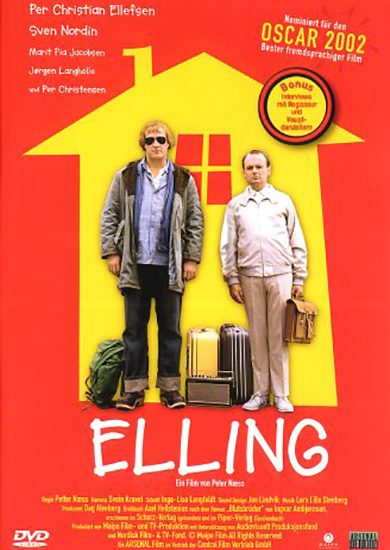 'Elling' is a warm-hearted, refreshingly unsentimental feel-good movie that deservedly won a Best Foreign Film Oscar nomination in 2002. Sensitive, middle-aged Elling is sent to an asylum after the death of his mother, where he becomes room-mates with Kjell Bjarne, a huge doltish man, whose main mode of expression is to bang his head against the wall. Two years later, both men are released from the asylum and move into a state-run apartment. With the help of their social worker, they try to adjust to the 'normal' world and its seemingly impossible tasks. Naturally the plot is less important than the relationship between the two men, which is frequently very moving and very funny. Both actors (Per Christian Ellefson, Sven Nordin) are excellent. They complement each other perfectly and each man reveals surprising depths. 'Elling' dispenses with clichés and sentimentality and provides an awful lot to enjoy. It deserves to find as wide an audience as possible.
London Review - March - 2003
Elling is the gentle tale of two mentally disturbed Norwegians struggling to make their way in the world. Obsessive-compulsive oddball Elling and his dense loutish room-mate Kjell Bjarne are released from a provincial mental hospital and are re-housed in a state-subsidised Oslo apartment. At first they are too scared to go outside but with the encouragement of social worker Frank, they pluck up the courage to take the first tentative steps back to normality. Such sympathetic treatment seems the stuff of fantasy but it sets the tone for a good-natured comedy, in which eccentricity is something to be cherished, not shunned. The Director Petter Naess keeps too much sentiment at bay by grounding the plot in recognisable human foibles and failings. Per Christian Ellefson (Elling) and Sven Nordin (Bjarne) inhabit their roles with an almost unsettling naturalism.
BBC Film Review - 2007

What you thought about Elling

There was no doubting the pleasure this gentle and unusual study of human relationships gave and formany of you it was particularly suitable as a film to end the season. The film `was touching, full of humour and pathos all at once’, `great entertainment with plenty to think about’, `off-beat, charming with a natural and spontaneous feel’, heart-warming with fine humour and nothing overdone’. It contained `great sensitivity and a positive spirit without being patronising’, and in its humour and pathos `showed caring and love in many different forms and guises’. It was summed up in single words of praise most effectively in some responses: `perfect’, `delightful’, `brilliant’, `poignant’, `lovely,’ `wonderful’. There were many tributes too, to the quality of the acting which created the balance in the film between `fantasy, frustration and freedom, while maintaining the dignity of the characters’. There were one or two dissenting voices, who while appreciating the film’s qualities found it `dramatically slow and a bit ponderous’, `a little too sentimental’ and that it made `too light of a serious subject’.