A fantasy movie that unfolds as a tale told to amuse a young child. The setting of a 1920’s Californian hospital. The narrator is an injured stuntman. The child is a nine-year-old with a broken arm. Shot in 28 countries including Bali, China, Italy, Romania, Spain, Cambodia, and Egypt! Notably different. 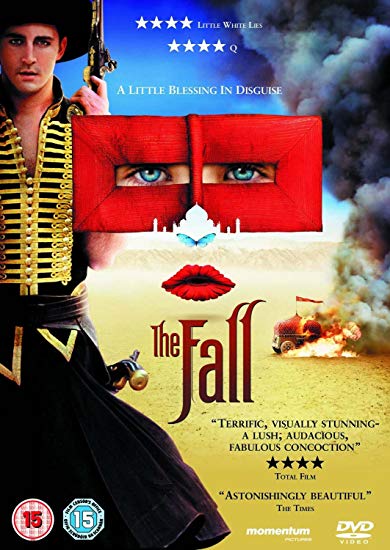 The Fall is a fantastical story about stories, that gives the impression of making itself up as it goes along. It's creator, Tarsem Singh, funded the film from his own pocket and shot it over 4 years in 28 countries. It's about a depressed silent screen stuntman who regales a little girl with swash buckling yarns, together with gaudy flights of fancy, as slow motion horses canter across the desert and naughty monkeys romp off in pursuit of butterflies. It's not without charm, but does it amount to anything more than sugar-frosted folly?
The Guardian - October 2008
Made by the Indian born but US based director, Tarsem Singh, whose main work is as a commercial director, The Fall is a fantasy movie which unfolds as a tale told to amuse a child. In this case, the setting is a hospital in 1920's California, the narrator, an injured stuntman, the child, a nine-year old, with a broken arm. Shot in India, Bali, China, Romania, Spain, Cambodia, the Czech Republic and Egypt, it's staggeringly beautiful, a triumph of cinematic style.
The Observer - October 2008
The Fall is set in the 1920s and stars newcomer Catinca Untaru as Alexandrion, a young immigrant girl who is recovering in hospital after a fall. Lonely and bored, she meets Roy, a wounded stuntman, who tells her a tale about five heroes: a masked swashbuckler, an escaped African slave, Charles Darwin and his pet monkey, an Italian explosives expert and an Indian swordsman. The heroes are all seeking revenge on the evil Governor Odious, so they kidnap his fiancée, in the hopes that he'll try to rescue her. Tarsem spent years in search of ever more exotic locations and architectural wonders. His hard work paid off, because the results are stunningly beautiful to look at, with bright colourful cinematography and jaw-dropping landscapes. The Fall is an engaging, beautifully shot, fantasy dream.
London Review October 2008

What you thought about The Fall

There was a full range of opinions about 'The Fall', although a significant majority found it either 'excellent' or 'good'. For those who enjoyed it, it was 'astonishing', 'jaw-droppingly strange', 'brilliant and extraordinary', 'sumptuous escapism', 'barmy but beautiful' and 'wonderfully imaginative'. Some in the audience found 'a clever interplay between fantasy and reality with stunning locations', 'charming poignant and funny', 'an ethereal dream-like film'. There was universal praise for the remarkable performance of Catinca Untaru as the little girl Alexandria. But this 'wacky, bizarre, gripping and entertaining film' raised doubts and reservations too. In one case it was thought to be an 'incomprehensible allegory', in several responses 'rather brutal and surprisingly violent' with an 'erratic, vague and confusing storyline'. Some viewers were troubled by what they saw as 'self-indulgent whimsy and mindless fantasy' with 'too much gratuitous violence'. One response described it tersely as 'horrible and incomprehensible'. So, as one might expect from a challenging film, there was debate and difference, although no-one was in doubt about the appeal of the exotic locations and the beauty of the cinematography.