This Palme D’Or winner is an authentic inner city school experience adapted from the story by Francois Begaudeau (who stars in the film!). Over a year, Francois tries to inspire a mixed collection of adolescents from a tough Paris quarter to use and understand French language and literature. With no easy answers and no sentimentality and marvellous performances from the amateur cast, The Class is a remarkable addition to the French tradition of films about schools. 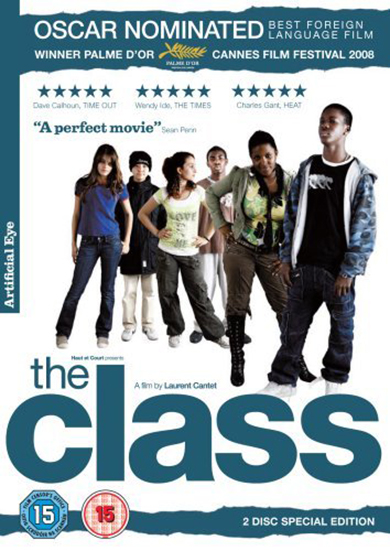 For his fourth film, The Class, which won the Palme D'Or at Cannes, Laurent Cantet has reverted to a non-professional cast, in adapting Francois Begardeau's novel Entre les Murs. Begardeau has turned his teaching experiences into fiction and he himself plays a 'prof' at a tough, racially mixed, inner city school in Paris. The film covers an academic year, beginning with the teachers gathering for the autumn term and being welcomed by the Principal, an unsmiling figure in rimless glasses. It ends with an informal soccer match between staff and pupils and a long-held shot of an empty classroom, its blackboard pristine once more. The camera never leaves the school; we see the staffroom, the claustrophobic playground, the principal's office and the classroom where Francois Marin is form tutor and teaches French to a mixed group of 14-15 year olds. In a taut, hand-held documentary style, the film concentrates on Marin as he tries to keep order in the class, mediating between conflicting ethnic groups, damping down the irreverently vociferous and trying to educate them. Marin's class is not an immediately endearing collection. They're querulous and quarrelsome and in some ways the brightest are the most obstreperous and disruptive. Neither weary cynic nor wide-eyed idealist, Marin is a decent, determined, realist, a Sisyphus of the classroom. He isn't one of the triumphalist Hollywood heroes who persuades a generation of special students to worship dead poets. He tries to understand the boys and girls and we begin to understand with him, the range of homes they come from. Marin is not a saint, though by the end of the year he has exhibited certain of the necessary qualities.
Philip French - The Observer - March 2009
A dedicated schoolteacher, a tough recalcitrant class – you immediately expect one of those sententious Mr. Chips style school dramas where the young delinquents see the light, appreciate Shakespeare and win the big match, to boot. Well, The Class is no such animal. This is an authentic inner-city school, right down to the smell of chalk dust. The multi-ethnic pupils, all non-professionals, are genuine school kids and are as individual as you would expect. The action covers a year during which Francois Begardeau tries to inspire his mixed bag of adolescents, with a feeling for French language and literature. A few respond, most don't, but he never gives up. The Class shows a microcosm of society but never tries to fob us off with easy answers. At last year's Cannes Festival, the jury were unanimous in awarding it the Festival's top prize. Some honour, considering the competition.
Philip Kemp - Totalfilm.com - 2009

What you thought about The Class (Entre les Murs)

The issue of how to educate the young fully and well in context of complex diversity of background, gender, ethnicity and motivation is one which concerns every European country and Louis Cantet's film The Class tackled it head on. The courage and importance of the film was appreciated by many of you. The film was 'engrossing, involving, moving and absorbing', 'full of insight', 'a sensitive portrayal', 'totally absorbing and realistic', 'a wonderful portrait of the challenges and rewards of teaching teenagers'. There was praise and recognition for the way the film 'drew the audience into the lives of the pupils and staff and was all the more engaging for that', and that the film was 'gripping and well-paced and not preachy in tone'. Another view thought that 'despite its excellence and sensitivity it was despairing and bad because it was all problems and no solutions'. Many of you praised the documentary style realism of the direction and camerawork and the remarkable performances of the pupils in the class and of Francois Begaudeau as the teacher 'very real', 'superb and sensitive but flawed like any human'. One response took the form of a professional tribute. 'As a real teacher it was so realistic it made me laugh and cry'. It wasn't all praise however. Some of you had criticisms of the length 'overlong and repetitive', and found it 'exhausting', 'very draining'. There was 'not much empathy with the students' in one response and several felt that the film though worthy, lacked plot and action. For one audience member the film 'lacked entertainment' and another was 'bored rigid and not in a good way – it was like going back to school'.