The Cave of the Yellow Dog

A portrait of nomadic life in a Northwest part of Mongolia using an unobtrusive visual style that respects both the characters and the landscape. A sheep rearing father is in conflict with his six-year old daughter who wants to keep a puppy she has found. A charming story told with superb direction. 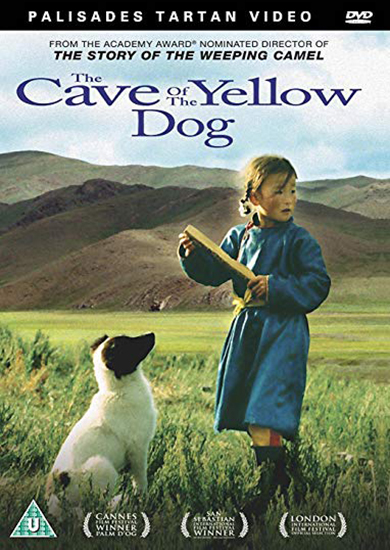 Writer-director Bymbasuren Davaa follows up her hit The Story of the Weeping Camel with another skilful blend of drama and documentary. The Cave of the Yellow Dog is an engaging portrait of life in a Mongolian nomadic family, set in the north west province of Altai. The film hinges on the conflict between sheep-tending father Urjinderj and his six year old daughter Nansal, over a puppy she discovers in the wild. The core story is a slender affair: Nansal is expected to get rid of her new pet in case it attacks the family's sheep and goats, but the dog then saves a human life. What's rewarding is the director's focus on specific details of the hard-working Batchuluuns' everyday lives. The nomads' values and beliefs are illustrated in the making of cheese and the dismantling of their yurt (a temporary tented home). They tirelessly adapt to nature. The Buddhist cycle of re-incarnation is a central concept here. In the father's words, "everyone dies, but no-one is dead". The unobtrusive visual style respects both the human characters and the wider landscape, with Davaa shooting her compositions in medium and long shots. Taking its title from a fable delivered to Nansal by a wizened woman, The Cave of the Yellow Dog offers an unhurried account of a nomadic culture, whose future is imperilled by the ongoing migration of its members to the (off-screen) city.
BBC 4 - Film Review - 2006
This follow-up to the Oscar nominated Mongolian docu-drama The Story of the Sleeping Camel is a sparse documentary tale of nomadic family life. When young Nansal finds a dog in a cave, her father orders her to return it to the wild, but she's reluctant and the animal becomes her best friend. The life of the family is the focus of the film; the children's games prove endearingly familiar and the parents' daily duties (washing, sewing, shearing etc.) are filmed with reverence and an eye for colourful detail. This film is a slow, steady, effective slice of life feature, a gently absorbing glimpse into nomadic family life.
Empire Central Review - 2006

What you thought about The Cave of the Yellow Dog

There was no doubt about the audience's pleasure in watching The Cave of the Yellow Dog on a raw evening at the end of January, as the overwhelming figures for 'excellent' show. The most frequent praise was for its 'charm and delight', and its insight into a very different way of life - 'visually stunning, informative, thoroughly enjoyable', as one response put it. The traditional way of life 'so different from ours, so remarkable in the happiness it showed' fascinated many of you with its 'beautiful still quality' and 'different rhythms', and sense of peacefulness. There was a positive response also, to the depiction of Buddhism in the family's life and its importance. Much of the atmosphere in the film relied on 'very skilled, unobtrusive camera work and direction', the amazing scenery, as the 'vast backdrop of the steppes gave a superb contrast to the detail of the family and their home'. One member found that 'the landscape was one of the best characters in this fascinating insight into a very foreign way of life'. All the performances were distinguished by their naturalness and one response suggested 'three Oscars for the kids'. The film was 'beautiful realism in its truest form', 'simply told, without sentiment or embellishment', in short, for several of you 'a masterpiece'. The Buster Keaton short was greatly appreciated for its energy, wit, timing and humour, with several requests for 'more please'.