An unusual film, it is a re-working of a 1953 film ’Tokyo Story’ about marriage and family life. A middle-aged Bavarian couple visits their daughter in Berlin following the wife’s discovery that her husband is terminally ill. She dies suddenly, before revealing her knowledge to him, and he decides to fulfil her dream of visiting their son in Japan. A quiet, beautiful film about love that makes expressive use of Butoh, a mysterious Japanese dance form. 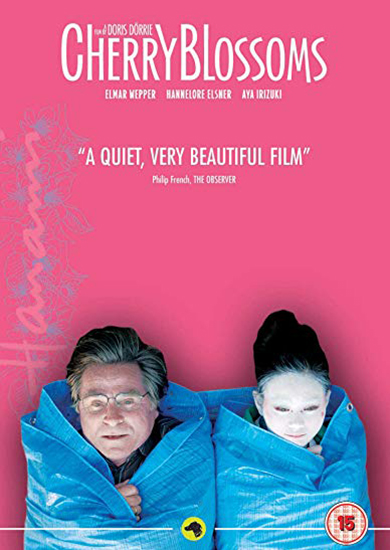 This attractive movie, from one of Germany's most unpredictable independent director, is a reworking of, or homage to, Yasujiro Ozu's Tokyo Story (1953), one of the greatest films about marriage and family life. In Dorrie's film a middle-aged Bavarian couple visit their estranged son and daughter in Berlin, after the wife discovers her husband is terminally ill. But it's she who suddenly dies and he who fulfils her great dream of visiting their other son in Japan, a country that has fascinated her since childhood. It's a quiet, very beautiful film about the durability of love and death and makes expressive use of the mysterious modern Japanese dance form called butoh.
Philip French - The Observer - April 2009
Doris Dorrie's film Cherry Blossoms, is a modern homage to Ozo Yasujiro's 1953 masterpiece Tokyo Story. An elderly German couple who live in a dull village, visit their grown-up children in busy Berlin. They are a toxic inconvenience until the moment they leave. The frosty schism between awkward parents and their ghastly offspring is authentic enough to prick tears in the family chemistry and grim surprises. Trudi (Hannelore Elsner) is told by doctors that her rigidly unexciting husband has only weeks to live hence the hastily arranged trip to Berlin. Rudi (Elmer Wepper) has no idea that he is terminally ill. Neither do his grumpy children. The secret bears exquisite fruit when an unexpected twist puts Rudi on a plane to Japan. Wepper is marvellous as this emotionally frozen man who suddenly wakes up to his own grey mortality. His platonic friendship with a beautiful 18 year old butoh dancer is contrived but inexplicably moving.
James Christopher - The Times - April 2009

What you thought about Cherry Blossoms

Dorris Dorrie's quiet and beautiful film struck the audience profoundly. It was described as 'very moving', 'bizzarely beautiful', 'a film of great emotional depth', 'beautifully made – hit many emotional buttons', 'beautiful, poignant and gentle'. It raised questions too: 'how could such a loving mother have such selfish and insensitive children?', 'how significant that love and understanding came from strangers, not from the family', 'a profound contrast between the materialism of Berlin and the deeper cultural respect in Tokyo'. It seemed that the audience understood the grief and loneliness of the bereaved husband and the guilt of the children and their incomprehension. Alongside the 'poignant depth of misunderstanding', there was an appreciation of the differences in contemporary Japanese culture, particularly the life in the parks and the power of the cherry blossom, juxtaposed with manic commercial activity. The beauty of the film was the result of 'stunning photography', and the 'remarkable performances' of the central actors. One response found a moving parallel between the emotional rhythm of the film, the rhythms of the Japanese butoh dance and the overall impact of the beautiful music. It was, then, a very touching and moving film 'autumnal but life-affirming', accompanied by 'the more chilling reflection that we always think we have enough time'.