This, our first documentary, is a record of the spectacular concert held in Kinshasa, Zaire (now the Democratic Republic of Congo), in 1974. It records a fast-moving, infectious celebration against a background of a world title heavyweight boxing match. Superb performances from the likes of Miriam Makeba and James Brown. A musical extravaganza! 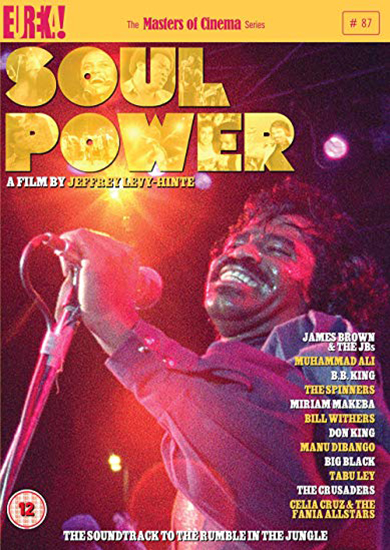 Another legendary 1970's era concert sees the light of day in this joyous documentary. The untold story of the three day line up of soul and world talent that preceded the 1974 Muhammad Ali – George Foreman 'Rumble in the Jungle' is an instant film classic. The director, drawn to unedited and backstage concert footage which has languished in a vault, has sculpted it into a fast paced overview that showcases musical talents at the pinnacle of their power. Talent erupts in impromptu jams everywhere from the plane to Kinshasa, tarmac, to urban market places. The concert proper begins about a third of the way through with remarkable performances from The Spinners, Miriam Makeba and James Brown. The technical package is as clean as could be expected and gives the authentic grain a velvety feel, perfectly in keeping with the contemporary aesthetic.
Eddie Cockrell - Variety - 2008
This lively documentary 'Soul Power' manages to find a new angle on the exhaustively chronicled 'Rumble in the Jungle' in 1974. The focus shifts away from the Ali – Foreman fight to the spectacular concert staged in nearby Kinshasa, Zaire (now the Democratic Republic of Congo) three weeks before. Featuring terrific performances from the likes of James Brown and Miriam Makeba, the result is a colourful fast moving crowd-pleaser. This is an infectious celebration of a remarkable event featuring some superb, larger-than-life performers at the top of their game assembled from more than a dozen hours of footage. However, now that the full despotism of Zairean president Mobutu Sese Seko is known, the ebullience and optimism of the performers and organisers takes on a bitterly ironic air. No mention is made of this thorny political content and many audiences may not know much about Mobutu and his misdeeds. The majority of viewers, however, will revel in Brown, Makeba, B. B. King etc. on the big screen and the truly great sound and fresh-feeling footage that could have been shot yesterday.
Neil Young - Hollywood Reporter - Feb. 2009

What you thought about Soul Power

Not unexpectedly, there was greater variety and division in the responses to the musical documentary Soul Power than in previous films of the season. Once again, however, the substantial majority found the film excellent or good revelling in its exuberance, enthusiasm and spirited delight in music. For one viewer it was 'one word, three-times excellent, excellent, excellent', for others, 'invigorating great power undimmed by 35 years', 'amazing', 'great sound', 'colourful', 'vibrant', 'uplifting'. Several of you found 'huge enjoyment' and 'powerful nostalgia' in the 'soul greats' of the past, re-living aspects of your own earlier lives and experiences. One response found the film 'a welcome antidote to the rather heavy dispossessed themes of earlier films' and 'an intriguing insight into another culture'. There were very specific pleasures in Muhammed Ali and his eloquence, in Miriam Makeba, BB King, Bill With, James Brown and the Spinners - 'great musicians at the top of their game', showing that 'music has a language of its own'. This 'spontaneous, vivacious, outrageous' film, was like gate-crashing 'the best party ever'. But this enthusiasm was not universal. Some of you liked the music, but found it 'oddly dull and unfocussed', 'not much documentary about this' , 'rather long', 'sent me to sleep a bit', and 'only a musical feast if you like soul music'. There was the honest reaction, 'simply not for me', as well as some stronger reactions, 'couldn't wait for the credits', 'dreadful row, no redeeming features', and 'we should have stayed at home and read a book'. It's clear that not all members will enjoy and appreciate the society's programme to the same degree, but the clear and dominant response was one of great leasure in this remarkable documentary musical record.