‘He beat you with nothin'. Just like today when he kept comin' back at me - with nothin'. Yeah, well, sometimes nothin' can be a real cool hand.’ This film is being shown as a tribute to the great Paul Newman who died in 2008. 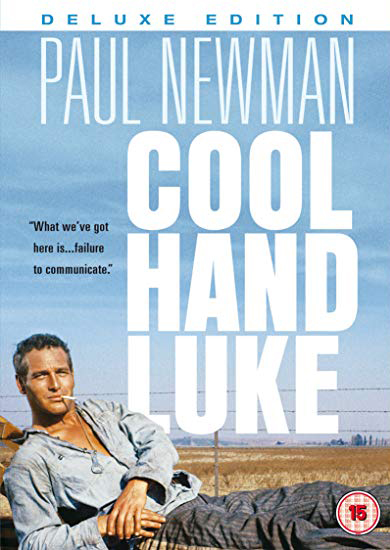 This film is the story of one man's life on a southern chain gang. Paul Newman plays Lucas Jackson, who in the opening scenes is arrested and sentenced to the chain gang for cutting the heads off parking meters with a pipe cutter. We learn that Luke is a war hero with a silver star and a bronze star and a couple of purple hearts. He was made sergeant, but came out of the army a plain private. Luke's problems are caused by his trying to get even for some wrong that the system, whatever system he happens to be in, has perpetrated upon him. Things are no different in the prison system. Paul Newman is superb in the lead role and supported with performances of depth and quality, by George Kennedy as Dragline, Stroller Martin as the Captain and the sinister, silent, Boss Godfrey, known to the prisoners as 'the man with no eyes'.
Movie Review and Sounds - USA
Six months after the 40th anniversary and just over a year after Newman's retirement from the screen, Stuart Rosenberg's Cool Hand Luke still stands as the quintessential cool movie. Lucas Jackson is sent to a hotter-than- a- smokehouse prison camp in the south. Lucas has the smirk of a troublemaker, but doesn't show his hand until 30 minutes in. After a boxing match between Luke and the leading con, Dragline (the great George Kennedy), each scene becomes a monument of pure rebellion, and after the fraternal bonding, the chronicles of Cool Hand Luke's escapes and returns are peppered with nods to the restlessness of America, the Vietnam War and, ultimately, the paradox of being cool for no reason.
Filmcentre - USA - 2008

What you thought about Cool Hand Luke