A debut film from the Czech new wave in the 1960’s which won an Oscar for the Best Foreign Film, the story is set in a provincial backwater railway station in occupied Czechoslovakia in the second world war. Milos, a young railway worker, yearns for love with a pretty train conductor but personal desires and feelings are caught in a larger historical framework. Old world, charming with unexpected heroism, the film has a satirical edge with bitter-sweet humour. 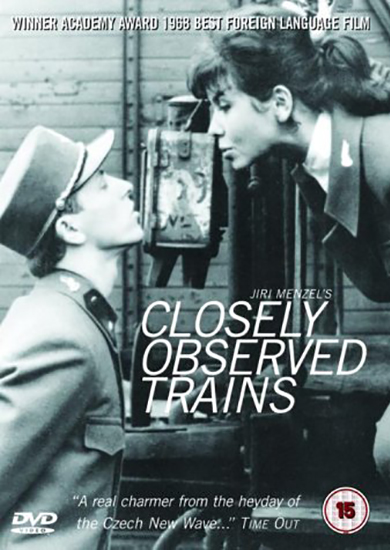 What you thought about Closely Observed Trains

There was greater variety in your responses to this Czech New Wave film than in previous screenings this season, although the 'excellent' and 'good' categories far outnumbered the others. There was praise for the 'excellent, subtle acting and characterisation', for 'strong characterisation in a witty and meaningful story', for 'poignant and wonderfully comic moments' and for 'lovely dialogue, script, shooting and humour'. The film made a substantial impact overall, 'a quiet film, beautifully filmed, very funny' and evoked levels of reaction to different aspects, 'a film full of unexpected angles', 'a subversive film – one wonders whether the Nazis represent the communists'. For some of you there was a telling and effective attention to detail 'interesting use of music, particularly the musical clock and the hard, relentless setting of the station in wartime', 'interesting Czech obsession with mechanical objects, clocks, bells'. For those who found a great deal in the film it was 'evocative and naïve', 'an interesting transposition of tragedy and comedy', 'black comedy at its best', 'touching realistic and improbable in equal measure', 'excellent, thought-provoking entertainment' There were, however, alternative views with reservations 'slight lightweight and not enough substance to hold my attention', 'poignant, atmospheric but not very interesting', 'very slow – but mildly amusing in places', 'numbing, boring, with odd moments of mild amusement', 'a bit slow and draggy in the storyline' and 'a worthwhile evening out, but barely credible'. So, in conclusion, this film, felt by several of you to be very advanced and innovative for its time, very well deserved the high reputation it has earned over the forty years since its production.