In My Father's Den

A powerful drama based on Maurice Gees' novel of the same title. Disillusioned war photographer Paul (Matthew McFadyen) returns home for his father’s funeral and is drawn into a family mystery and a web of secrets and lies. This deeply-layered thriller with its twists and turns is a further creative development from the burgeoning New Zealand film industry (Whale Rider, Lord of the Rings). 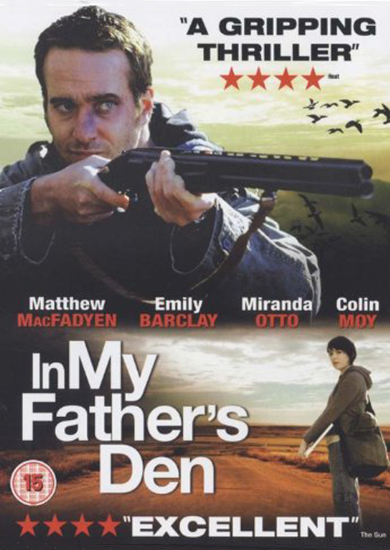 'In My Father's Den' has so many positive attributes, it is difficult to know where to begin. A deeply layered mystery thriller, written and directed by first-timer Brad McGann, it's a story that compulsively twists and turns until its closing moments. Brad McGann allows his story and characters to develop and breathe, in a film that is never less than engrossing. Along with cinemaphotographer Stuart Dryburgh, he creates a perfect visual tapestry of the surroundings with music playing an integral part. The honours go to the two leads, Matthew Macfadyen who delivers a complex psychological performance and Emily Barclay, who plays the smitten student and gives a performance way beyond her years. A mix of ingenue, adolescent and aspirational teenager, her Celia is a triumph.
Paul Hurley - Channel 4 Film Review - 2005
The desolate landscape of New Zealand's Central Otago region reflects the emotional pull of this powerful adult drama. Disillusioned war photographer Paul, returns home for his father's funeral then finds himself drawn into a family mystery, as he becomes attached to sullen teenager Celia. Making the most of an evocative sound track (dominated by the proto-punk tones of Patti Smith) writer/director Brad McGann skilfully updates Maurice Gee's novel of bereavement and despair without losing sight of its stark emotional power. As Paul confronts his own past, his relationship with his father and the eerie emptiness of the New Zealand landscape, he finds himself trapped in a tangled web of secrets and lies. This is enthralling, grown up cinema, that's guaranteed to move.
Radio Times Magazine - 2005

What you thought about In My Father's Den

Irrespective of the various pros and cons raised by the audience, there is almost total agreement that the poor sound that accompanied the screening significantly reduced the quality of the viewing experience and concealed significant aspects of the film. This was due in large part to a technical error on the part of the projection team. Please accept our apologies and a commitment to not let it happen again. Most people appreciated the inherent complexity and ambiguity in both the story and the manner of its filming. Harrowing but intriguing; beautifully shot and very atmospheric; thought provoking; engrossing, confusing, mysterious, complex – emotionally exhausting; riveting; convoluted but enjoyable; plenty to think about; most intriguing and gripping – though not at all easy to follow! For others, it was rather too complicated. Bit too much joining of the dots required; liked the acting but too far fetched and don't think everything added up – feel a bit drained. For many the film was really, really good – gripping – well acted – beautiful film; Really enjoyable –Good cinematography; Great film – surprising and well constructed. Built up tension well; Slow beginning that turned into a powerful and dramatic story – beautifully cast and acted in a stunning setting; Fantastic scenery; Gripping – really enjoyed it; Liked the way the film developed and drew you in to a complex web of story and characters; Intriguing multi-layered narrative with strongly realised characters; Very clever – loved it. The performances of the leading characters drew particular comment. The dynamics between the two main characters was convincing – the older man attracted and irritated by the teasing adolescent – in a context where everyone was out of their depth with the tensions and feelings they are forced to confront. Great acting – teenagers so vulnerable – sad for the mother; Some magnificent acting and scenery; Slow start but brilliant acting by Macfadyen and Barclay; Brilliant performances by the central characters; Characterisations somewhat superficial apart from the lead pair. As for the story and its presentation, this produced varied comments. Pity about the confusing time slips; Kept you guessing until the very end; I feel like I have been through the ringer twice!; Powerful and emotional; Difficult to follow and understand; Hard work all those flashbacks; Didn't all add up; A sad gripping film – need to see it again to pick up on all the twists and turns; Remote communities, dark past, hidden ties – very well crafted; Atmospheric and thought provoking – and in English! Plot was bit too far fetched at times; Poignantly sad – the brothers denouement was a bit of an anticlimax; Over complicated plot – it was more than halfway through before I had any idea who was who and what was happening; Fractured and disjointed but also mysterious and beguiling; Dreary, uninspiring, draining, soporific. Three observations to end this summary: No cinema throws up such good movies – more please; Too long and the cinematography was over indulgent; Interesting use of a G F Watts painting!