A film version of Isak Draxon’s short story about a female chef-de-cuisine in exile in Denmark following the Paris uprising of 1871. She works as maid and cook to an elderly puritan couple and their devoted daughters on a remote Scandinavian North Sea coast. Babette decides to spend all of her lottery winnings on a great feast for the villagers more used to brown soup and dried cod. Marvellous locations, excellent acting and sensuous, mouth-watering joy in the feast itself. 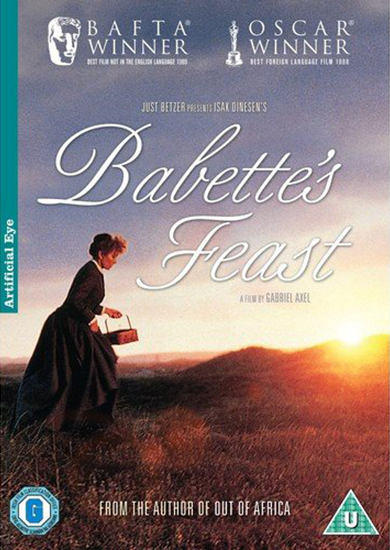 Isak Dinesen's short novel Babette's Feast, is a rousing yarn of delicate philosophical overtones about a French chef de cuisine of 5 – star repute, exiled after the Paris uprisings of 1871, who survives as a maid and cook to a couple of elderly puritan and devout spinster daughters, of a strict sectarian vicar, on a remote and rugged Scandinavian North Sea coast. The title character (Stephanie Audran) prepares and serves up a final great dinner by blowing her entire 10,000 Golden Francs lottery winnings. At the table are villagers, sect members, fallen to bickering amongst themselves and averse to any food beyond brown bread, soup and dried cod, with water on the side. A visiting Swedish General and diplomat, once a suitor to one of the daughters, has happened by too. Now they are all momentarily propelled spiritually heavenwards by what they eat and drink. Veteran director Gabriel Axel succeeds where it really counts. On the screen he serves up the famous dinner with vigour and juicy detail. The overall mood of the original story is faithfully retained, with excellent performances in wit and depth, from Jarl Kulle and Stephanie Audren.
VARIETY - January 1981
Why in the 1870's would a Parisienne, an acclaimed chef, be working for a pittance for two elderly sisters on Denmark's windswept Jutland coast? The unlikely answer is found in Gabriel Axel's superb adaptation of Isak Dinesen's very funny short story a bizarre, magical concoction, seasoned to mouth-watering effect. The ingredients are marvellous locations , crisp photography and an excellent cast. This is a gently comic portrait of lives defined by pious austerity. It's a tale of self-sacrifice, thwarted ambitions and lost love, but sheer sensuous joy suffuses the screen when Babette performs her own special miracle for one last supper.
Time Out - 1981

What you thought about Babette's Feast

There was a general and very positive consensus that this 'heart-warming, gentle, simple, moving,' film, was a very fitting and seasonal conclusion to 2009. It was 'beautifully filmed', 'an interesting reflection on choices made', a 'portrayal of an austere life', 'where art meets love and loss', where 'the stillness of the sisters and their restrained emotions and sense of duty was a timely reminder of days gone by'. Several of you appreciated the contrast between the simple puritanical life and the fantastic feast, with one response taking it further to find the moral, 'good food is better than prayer'. There was praise for the photography and its 'Old Master' quality, for the muted colours and focus on the expressions on the guests' faces at the feast. It was perceived as 'a fairy story for adults and a gentle but effective probing of fixed attitudes to religion'. Many responses praised the superb acting – the sisters, the general, the villagers and Babette creating a 'faultless atmosphere' and a balance between humour and 'deeper reflections'. There were some minor reservations - 'bit slow', 'lacked some pace at the start', 'more pace would be appreciated' and 'life in a Scots sitting-room has nothing on the Jutlanders - 10 out of 10 for dour!' But there was much pleasure all round, summed up by one member - 'The best film I've ever tasted – delicious'.