An intricate thriller by American crime writer Harlan Coben re-located to France. In this multi-layered, time-hopping narrative, a paediatrician, suspected by the police of murdering his wife, receives an e-mail from her 8 years after her death. When another murder is committed he is subjected to further police investigation. The film has a strong sense of urban action and ‘Hitchcockian’ ambivalence overlaying a multitude of plot twists and turns. Some excellent performances underline the high quality of this gripping film. 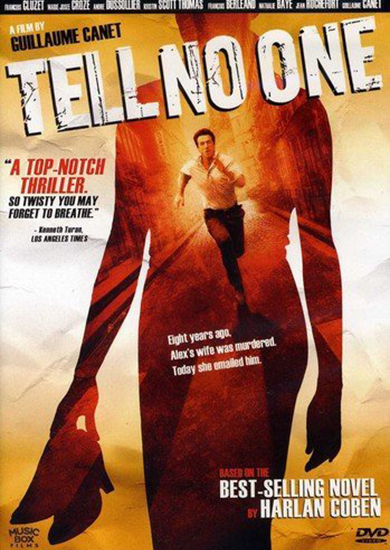 An intricate, intelligent and very watchable thriller, adapted from the novel by American crime writer Harlam Cohen and relocated to France by that nation's latest actor-director sensation, Gillaume Canet. Canet does an excellent job behind the camera, elucidating the multi-layered, time-hopping narrative. The estimable Francois Cluzet plays a paediatrician whose wife is murdered, and then, years later, is the target of police suspicions when more bodies turn up in the same place. Lots of mournful memory sequences mean the narrative becomes a bit of a jigsaw puzzle but Canet keeps everything on track with aplomb.
The Guardian - June 2007
French actor-director, Guillaume Canet, had a big hit in France with this adaptation of US writer Harlam Cohen's best-selling thriller. As the film veers violently from housebound bourgeois psychological thriller to urban action adventure and back again, it certainly makes its main actor, Francois Cluzet, jump through all the acting hoops. As the widowed paediatrician, whom the police suspect of involvement in his wife's savage murder eight years earlier, he does well to retain the composure and air of Hitchcockian ambivalence necessary to cast shadows of doubt in the audience's mind. Cluzet shows good heels and stamina as he sprints through the markets and motorways of suburban Paris, trying to evade the police and mystery assailants as he pursues his hunt for a mystery woman who may or may not be his dead wife. There are excellent cameo performances, also from Kristin Scott-Thomas and Jean Rochefort which grace and brighten the direction and fluid camera work.
Time Out - June 200

What you thought about Tell No One

This intricate and watchable French thriller was received with considerable pleasure by the audience, as the responses show. It was 'complex, brilliant', 'riveting', 'gripping', 'fast-moving', 'a cracker'. You enjoyed the 'taut and compelling' plot, 'the twists and turns', 'the doubts and ambivalences beneath appearances' and the 'amazing plot, never once predictable'. There was pleasure in the urban chase sequences and in the skill and power of the central performances, particularly Francois Cluzet. The quality of complex suspense was enhanced for many of you by the excellent music. Several of you commented however, that you were taken along by the pace of events, but felt a confusion only resolved by the lengthy denoument, although this did not diminish the enjoyment of the film. The 'taut and taxing' narrative was, for some, an 'over-complication', with some doubts about credibility and whether it was 'far-fetched' and over-long. These reservations apart, several responses indicated that this was the best film of the season and that more of the same would always be welcome.