A thought-provoking drama from the current Palestinian-Israeli conflict. The setting is the Israel-West Bank border where handsome widow Salma Zidane has a lemon grove her father planted half a century ago. When the Israeli Defence Minister builds a house up against the grove, Salma’s lemon trees are deemed to be a potential terrorists' haven and severe security risk. 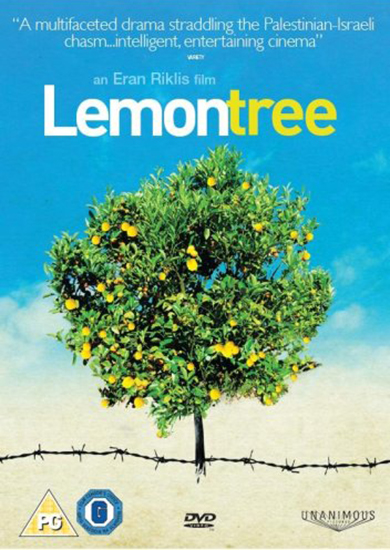 The rare ability to make intelligent, entertaining cinema from immediately current issues is beautifully illustrated by 'Lemon Tree', a multi-facted drama straddling the Palestinian-Israeli chasm, that's marbled with irony, generosity, anger and some optimism. Israeli director Eran Riklis takes a story of border sensitivities and approaches it at a simple human level, which is topped by an outstanding performance from Palestinian actress Hiam Abbass. The setting is Zur HaSharon, on the Israeli-West Bank border, where 45 year-old widow Salma Zidane has a lemon grove her father planted half a century ago. When smooth, new Israeli Defence Minister decides to build a new house right against the grove on the Israeli side of the border, Salma's lemon trees are deemed a defence risk and a potential terrorist hiding place. That's the basic story but the script soon fans out into a multi-character piece, for which the central plot (a metaphor for Israel's much more substantial defence wall) is only a trigger. A gradual love story develops between Salma and her young Palestinian lawyer and there is a slowly developing sense of emotional complicity between the Defence Minister's wife and the Palestinian widow. A fine elliptical script and a slick technical package throughout make this an important and dignified film.
Derek Elley - Variety - 2008
Inspired by a real-life incident, this captivating Israeli film is both a compelling story of self-determination and an astute evaluation of the current state of a divided territory. Israeli director Eran Riklis encompasses wider issues than the survival of the lemon grove itself. This film exposes the vulnerable position of a lone widow in an entrenched, conservative Arab community, while tracing the fascinating complicity between Salma and the sceptical wife of the Defence Minister. There is compassion, understanding and hope on the individual level and a strong narrative momentum centred around the battling underdog, without any hint of over-simplification. The performances are sensitive and resilient and the film's final bleak and sobering image, pulls together the many complex strands in the film.
Trevor Johnston – Time Out - 2008

What you thought about Lemon Tree

There was great praise for the 'intelligence', 'complexity', 'subtlety', 'thought–provoking quality', and 'smouldering performances' for this timely and demanding film. For several of you the film interpreted both the personal and the political dimensions and their interactions, in what we know , rather distantly, as a middle-east flashpoint issue, in a very effective and moving way. The 'multi-faceted' nature of the conflict involvrd added clarity and lucidity to the viwers' understanding, 'opening out the Israel/Palestinian conflict beyond the usual news reports'. The 'poignant and beautiful acting', especially of Salma Zidane, communicated 'great personal dignity and the dignity of the oppressed', despite the failure of many around the central characters. The 'very powerful' sequence of events was 'beautifully shot', to mirror the broad aspects of the Arab /Israeli conflict in direct and personal terms. There was a response too, not only to ' the sorry state of affairs which is the Israeli/Palestinian problem', but also to the 'interesting allusions to the situation of women on both sides'. It was, for one viewer, 'a political film to make right-minded people very angry, reminding us to check our own moral stand on righting wrong and injustice in the world', while another viewer was deeply impressed by the way the film 'said so much – very quietly'. So, with barely a dissenting voice, you found this film moving, poignant and full of insight, and for a significant number, the accolade of 'the best so far'.