I've Loved You So Long

A strong, thoughtful start to our season with a powerful performance from Kristen Scott-Thomas as Juliette, a forty-something-year-old woman who leaves prison having committed a terrible deed in her past. It is an intelligent, observant drama about the fragility and pain of unshakeable memories. Beautifully acted, it is not to be missed! 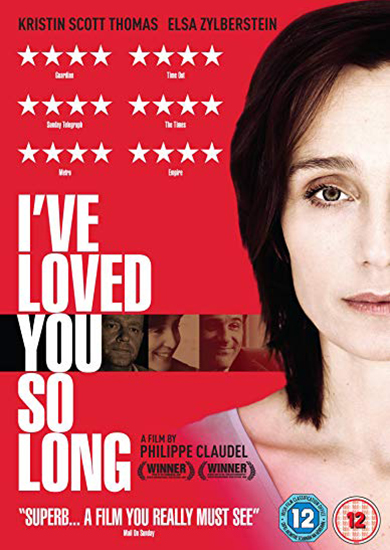 The presence of Kristin Scott Thomas in this literate French movie by Phillipe Claudel is powerfully distinctive. Her formidable bi-lingual presence, her beauty, her air of hypersensitive awareness of all the tiny absurdities and indignities with which she is surrounded, creates an intelligent, observant drama about dislocation, fragility and inner pain. She plays Juliette, a forty something woman who, after a long and painful separation, has been taken in by her younger sister Lea. When we first see Juliette, she wears no make-up and smokes perpetually: she has a dowdy grey cardigan of the sort worn in girls' boarding schools, and has clearly been institutionalised in some awful way. The reason for Juliette's absence is a grim, unnameable secret. Its shadow has fallen over the family's life and it is only when Juliette goes for job interviews, or the mandatory meetings with her welfare care worker or the local police officer, that she can speak the truth aloud. For a novelist, Claudel shows remarkable skill in his first feature film; in fact his script is almost a screenplay master class, absorbing a lot of facts and story into a small space, but without uncomfortable cramming and he adroitly suggests the slow process by which Juliette is gradually accepted into the family and the community. Kristen Scott Thomas's performance is easily the best of her career – at the centre of a deeply involving beautifully acted and expertly constructed human drama by and for grown-ups.
Peter Bradshaw - The Guardian - September 2008
We first meet Juliette (Scott Thomas), a flinty, haggard middle-aged woman in an ill-fittting overcoat, awaiting the arrival of her younger sister Lea. It's evidently their first meeting in a while, the plan seems to be that "Auntie Juliette" will live in Lea's home in a bourgeois village in Nancy, which she shares with two adopted Vietnamese daughters, her husband Luc and Luc's invalided father. Juliette has been in prison ; her past crime is, for now, tantalisingly concealed. Writer/director Philippe Claudel wants us to focus initially on Juliette's struggle to readjust to her new life. Yet little seems to pierce her closed-off, at times hostile, defences. While Lea and Juliette ever so slowly reconnect, the question of whether true reconciliation can win out over simmering resentment and overwhelming guilt, is ever present. But more than anything, this is an actor's film and Kristin Scott Thomas gives the performance of her career. It's a killer role that lets her shift from haunted shell to a tentative re-engagement with life and it's hard to imagine anyone doing it better.
Leigh Singer - Channel 4 Film - September 2008

What you thought about I've Loved You So Long

The first film of the season received warm and substantial praise. The very high proportion of the responses that found it excellent, concentrated in equal measure on the acting performances and the power and structure of the unfolding narrative. Several of you found it was 'beautifully paced', 'very moving', 'compelling', 'subtly and powerfully constructed', 'so well directed in its gradual revelation of tragic events'. The depth of feeling evoked reflected the 'great use of different camera work for different moods – especially the hand-held digital camera when Juliette is becoming part of the family'. It was, for some, 'emotionally draining', and 'humbling in its portrayal of inner pain', and original and gripping in its depiction of the 'heart-rending inner life' of the central character. But within this pain there was also hope and a sense of blossoming in the tentative and sensitive reconstruction of a life. Virtually every response found Kristin Scott-Thomas's performances as Juliette, outstanding. Her acting was praised for its power, honesty, integrity and emotional control. She was 'brilliant', 'sensational', 'subtle', 'sensitive', 'superb', 'wonderful', in her tragic and enigmatic portrayal of character, 'a truly exceptional performance in an unglamorous role'. 'She can act', said one response, 'with her face in silence'. Another tribute found 'she did not play this part, she was this person'. The praise was not confined to Kristin Scott-Thomas's lead role. There were superb performances from Elsa Zylbersteen, as Lea, the sister, Frederic Pierrot as the policeman, and Lea's two adopted daughters. The only reservations from the almost universal praise for the film were about its ending. 'It might have been a braver story if the reason had been less easy to forgive', said one. Another comment, while recognising many qualities found it unbelievable that no other family member 'knew of the son's tragic terminal illness'. However, there was general agreement that this compelling and moving film made an excellent start to the new season and whetted the appetite for more.