Dominic Lees will introduce his film and, with the help of others associated with the production, will hold a question and answer session after the screening. 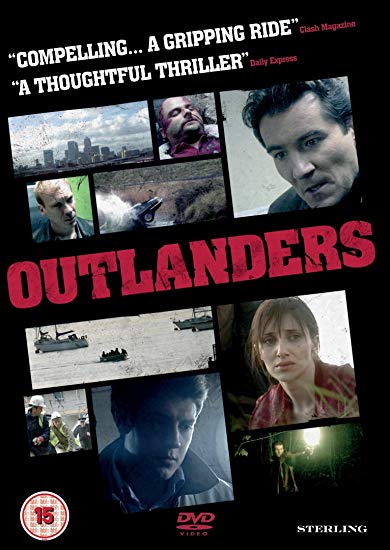 Of recent films which have examined the immigrant experience, Outlanders is arguably the best. For once we have a film that gets near the heat of what it might actually be like for the thousands of unskilled workers who have entered the country over the last few years. Director Dominic Lees and screenwriter Jimmy Gardner have fashioned a warts and all look at a tough way of life, but thanks to the well-shaped script and some compelling central performances, it never veers into sentimentality and remains believable throughout. Outlanders is not a cheery affair, but it is far more honest than many of the films which deal with this issue. Anyone seeking a well-fashioned slice of social realism will be rewarded, as it is certainly a film to make you think.
Film Review - Paul Hurley - Tiscali
When it comes to depicting the experience of immigrant workers in the UK, Outlanders depicts the dark recesses of underworld London in a brutal and direct manner. Outlanders is a compelling social realist drama that excels due to the moral interconnections between the two brothers and Adam's girlfriend, a Russian illegal immigrant. It is Adam's ultimate dilemma that ensures a gripping ride, as he faces the choices – to land his brother in jail or to continue to risk the lives of exploited workers.
Ben Hopkins - Clash Magazine
Lees' small budget independent film paints a bleak and accurate picture of London's illegal immigrants. He is helped by an able cast and excellent cinematography from Adam Jeppesen, which looks at the city through the eyes of those being miserably exploited. Outlanders authenticity is beyond doubt.
Derek Malcolm - Evening Standard
An enterprising low budget British feature which confronts some of the stark realities for the countless migrant workers who flock to London in search of a better life. What emerges is a thoughtful thriller with a strong social conscience that makes a sincere attempt to shed light on a world far removed from a tourist's view of London town.
Allan Hunter - Daily Express

What you thought about Outlanders

There was recurring praise for and appreciation of 'the raw authenticity' of Outlanders and its power to jolt the audience 'out of a comfortable Surrey existence'. The 'blank and depressing' elements were seen as a tribute to the evocative atmosphere created by the director through lighting and locations. The four lead performances – Janek, Adam, the girl and the policeman – were 'thoughtful, sensitive and utterly convincing' allowing the film to explore 'issues of love, loyalty and conscience'. Adam's character grew through the film from 'eager innocence to bitter experience and compromise' and this was shown in the clever way he appeared to age and mature physically. The dilemmas and difficult decisions forced on individuals through no fault of their own gave the film a 'sensitive and thought provoking quality'. One viewer saw the film as a journey, a 'coming of age', for the central character with a powerful, understated ending which, in its ambiguity (are they henceforth together or estranged) enhanced the complexity of the film. The tension between allegiances and moral action was felt by several to be at the heart of the film's tense and subtle direction and to create the 'momentum of the story'. Many of you praised the 'superb photography' and the 'excellent original music'. The presence of the director, Dominic Lees, for the 'absorbing' post-screening discussion made what was for many 'a thoroughly enjoyable evening'.