An intelligent and beautifully crafted film set in rural Alabama in the 1950s covering the birth of rock and roll and the coming of the electric guitar. The proprietor of the failing 'Honeydripper' hires a famous guitar player, Guitar Sam, for a one night gig in a last-ditch attempt to save the club. 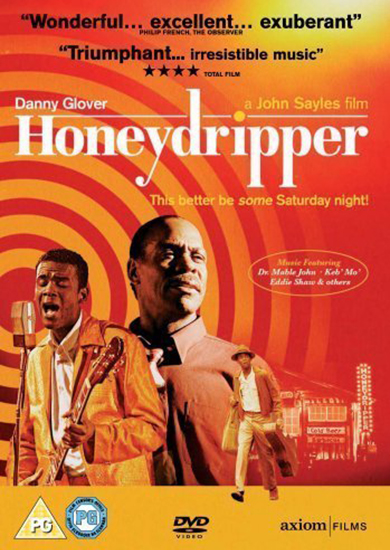 John Sayles Honeydripper, is a fusion of pop mythology and social mosaic, imagining the world-changing moment around 1950 in the rural South, when a blues guitarist first plugged in and rocked the joint. That cultural harbinger is an itinerant freight train-hopping young guitar wiz, with no particular place to go, who stops off at the sleepy little town of Harmony, Alabama. His instrument, cut from a solid woodblock and lacking a sound hole, emits rock'n'roll lightning at the Honeydripper, a dilapidated road house on the verge of going out of business. Saturday night in America will never be the same again. All the characters and situations have familiar folklore elements. Desperately in debt, the Honeydripper's owner, a former boogie-woogie pianist, steals the liquor destined for a rival club, whose jukebox is doing out of his business. On arrival in Harmony, Sonny Blake, the guitarist, is arbitrarily arrested for vagrancy by the white sherriff and despatched to pick cotton. An agreeable and well-intentioned film, fusing archetypes from the Jim Crow South, both black and white, with mythic dimensions.
New York Times - 2007
John Sayles Honeydripper is a musical period piece that manages to be light-hearted and socially conscious. Against a background of sublime rhythm and blues, Danny Glover brings a worried gravity to the role of Pinetop Purvis, proprietor of the failing Honey dripper Saloon. Pinetop launches one last desperate promotion, plastering the town Harmony with handbills for an appearance by the New Orleans sensation, Guitar Sam. You can guess that the performer won't show, but the sophisticated twist Sayles puts on the last minute substitute is a welcome surprise. The script is full of fresh observations about Southern life in the 1950's. There's a warm glow of nostalgia for simpler times, alongside the recognition that the good old days had ugly problems. Stacey Keach registers powerfully as a racist sheriff, with a talent for trumping up nonsense charges against anyone who crosses him. John Sayles balances social consciousness against a tone of poetic realism, the whole film distinguished by splendid performances from a gallery of excellent black acting talent.
Star Tribune - 2007

What you thought about Honeydripper

John Sayles Honeydripper, was for most of you, a light-hearted film with some serious issues, but with a 'feel-good' factor which made it a good way to end the first half of the season. There were several comments on the beautiful way it was filmed, the well-established atmosphere and the excellent acting and characterisation. There were quantities of fun, nostalgia and historical insight into Alabama life in the 1950's, which the audience enjoyed. With this generally positive note, however, there were reservations about the pace and structure of the film, the overlong exposition and lack of dramatic action in the early stages. Many of you could have done with more music and found the concluding half hour much more enjoyable than the preceding hour which was felt by some, to be slow and predictable. The accents of the deep South again posed problems and there were several comments about the difficulties of following some of the dialogue and hence the development of the action. So Honeydripper was a worthwhile film with good entertainment value and great music, but despite excellent performances, too drawn out and too slow. The music was a great reward for the somewhat ponderous story, but there wasn't enough of it.