Two young women share a room at university in Romania during the last years of communism. One (Gabota) is pregnant. Abortion is illegal. They are going to meet a certain Mr Bebe. Neither of them has experienced anything like this before. Palme d’Or 2007. 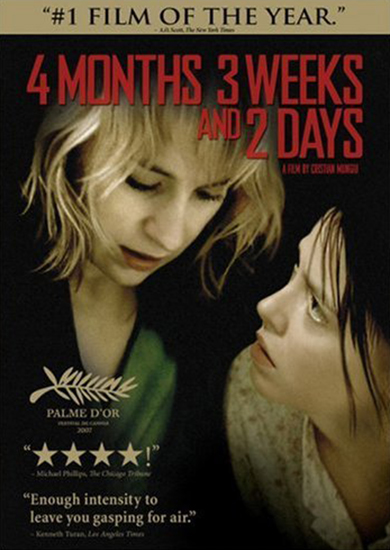 Pitch perfect and brilliantly acted, 4 Months, 3 Weeks and 2 Days is a stunning achievement, filmed with a purity and honesty that captures not just the illegal abortion story at its core, but the constant unremarked negotiations necessary for survival in the final days of the Soviet Bloc. Showcasing all the elements of the new Romanian cinema, Mungui's goal is to visualise the overwhelming weight of the soul-destroying compromises of life during the Ceausescu years, through clear-eyed, deeply humane stories. Foremost among the many revelations of the film is Anamaria Marinca's stellar turn as Otilia. It's not just the way she transforms scripted dialogue into real-speak, but her ablity to convey all her inner struggles in silence. Laura Vasilu is equally fine, a frightened young woman desperate to end her ordeal. The cinematography achieves miraculous effect through the observational camera, capturing the necessities without ever feeling voyeuristic. Colours are all muted cement tones capturing the claustrophobia and ugliness of life in the Eastern Bloc.
Variety - June 2007
Cristian Mungiu's drama set during Romania's communist regime, is startlingly good viewing. 4 Months, 3 Weeks and 2 Days takes place over one day in 1987, when Otilia (Anamaria Marinca) helps her university room-mate Gabita (Laura Vasilu), seek an illegal abortion. Risking prison under Ceaucescu's dictatorship, Gabita seems to be falling apart, so it's up to Otilia to facilitate the doctor and the hotel room - but quite how far she's willing to go to help her friend is yet to be tested. Part of a planned trilogy on Romania's communist years, the film doesn't talk directly about politics, but shows how the constricting laws can dehumanise those living under them. What results is shocking, but never asks for pity. This is a film about cruelty, but one which channels humanity. Brilliant.
BBC Movies Review - Jan 2008

What you thought about 4 Months, 3 Weeks and 2 Days

The audience's response to the film's unflinching and brutal portrait of the claustrophobic and oppressive life in Ceauscescu's Romania was forceful and direct. It was perceived as 'uncompromising', 'hard to watch', 'shocking in its directness', 'disturbing', 'tense and desperate'. Several comments referred to the 'superbly maintained atmosphere', through which the experience of Romanian society was communicated. But within this dark and disturbing film, some saw the power and redemptive qualities of friendship within an otherwise joyless and selfish world. There was general agreement on the excellent acting, particularly of Anamaria Marinca as Otilia and the powerful direction and cinematography. Having recognised the film's many qualities however, few could say they had actually enjoyed it because of the unremitting grimness and misery it portrayed. While it was generally agreed to be thought–provoking and a widening of perhaps over-comfortable UK horizons, for some it raised issues of the purposes of cinema – entertainment or education? In conclusion, a grim, painful and upsetting film, but one made with honesty and intensity, which merited inclusion in the programme.