Lars and the Real Girl

In this sweet and slightly off-centre comedy, the timid and introverted Lars believes that his life-sized doll Bianca is a real human being. A film about family ties and loneliness laced with humour. 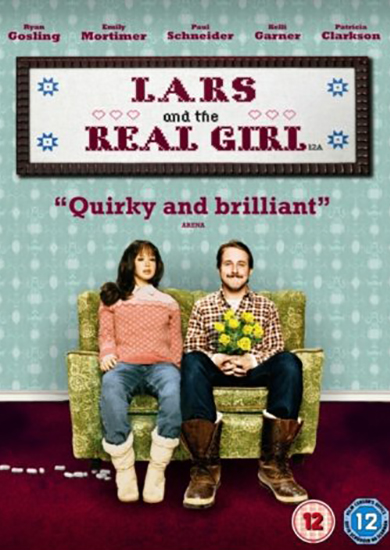 This unnerving comedy, the second movie from Craig Gillespie, from an Oscar-nominated original screenplay by Nancy Oliver, is set in winter, in a small town in a Mid-western state. The central character is Lars Lindstrom, a pathologically shy 27 year old, working in an office. Lars lives in a bedsitter in the house he has co-owned with his elder brother Paul since the death of their father. Gus, who runs a hardware store, and his pregnant wife Karin, constantly try to lure Lars to dine with them, but he always has some excuse to refuse social engagements. One day Lars tells Gus and Karin he has a girlfriend whom he'd like them to meet. His brother and sister-in-law's initial delight rapidly abates when they discover that Bianca is a provocatively dressed, anatomically correct, sex toy, bought on the internet. Lars treats her as if she's absolutely real but even shyer than him, so he acts as interpreter. Gus and Karin turn for help to the pastor and the town's female GP, who is also atrained psychologist. The troubled church elders turn to their priest who tells them: 'The question is, what would Jesus do?' The film is not concerned with psychological explanations, but is a moral fable exploring kindness, understanding, love and the acceptance of human diversity. In this new film, the director deals accurately with embarrassment as an edgy source of humour and social criticism. He's served admirably by an ensemble cast. Patricia Clarkson is particularly good as the generous understanding doctor who's unassertively the articulate moral centre of the town.
The Observer - March 2008
Lars lives in a small town next door to the house of his brother and pregnant wife, Karin. Lars is a loner, an emotional introvert, who refuses to integrate. The world is longing to give him a hug, but for Lars, hugs are hell. So he orders a sex doll from the internet instead. Director Craig Gillespie's film is a soft, sweet study of a man with a mental health problem. Lars treats Bianca as his sweetheart, not his guilty secret. He takes her everywhere with him and talks to her as though she is a real person. Naturally Gus and Karin are shocked. They go to see the town doctor who suggests they play out his problem. The town turns out to be wonderfully tolerant. They all talk and behave as if Bianca is a real person and it isn't long before she becomes a beloved member of the community. The film operates in the familiar dramatic terrain of the dysfunctional family who have to face up to their dysfunctions. Ryan Gosling, as Lars Lindstrom, has the perfect look to portray a man driven over the edge by loneliness. He has the saddest eyes in the cinema; they twitch out little Morse code messages of despair.
The Sunday Times - March 2008

What you thought about Lars and the Real Girl

There was general applause and acclaim for this film as the responses figures overall, indicate. There was praise for the warmth, the originality, the bizarre situation and the steady growth of personal and social understanding. Many responses felt the film was 'truthful', 'sensitive', 'sympathetic', 'moving', 'very emotional' and had many resonant moments, particularly in its handling of families and the community. The combination of these two qualities, with a quirky and gentle humour struck many of you as being particularly powerful, although for several in the audience there was an abiding sense of sadness too. The blend of this sense of sadness with something uplifting was seen as a tribute to the subtle and intelligent script and the finely-tuned pace of the direction and the winter setting. In addition, several of the audience remarked on the 'exquisite observation of kindness' in the film, not an emotional quality often so closely and effectively observed. There was a common view that the acting was excellent all round, with particular praise for Ray Gosling as Lars and Patricia Clarkson as the doctor. There were minor reservations: one viewer felt that only sensitive direction and excellent acting could give credibility to an improbable story. Another wondered whether such an unambiguously tolerant community could ever really exist. Another response found it 'enchanting but escapist comedy' with the character of Lars and the causes of his emotional damage insufficiently focussed. Nevertheless, for the clear majority of the audience it was 'a generous, gentle, sympathetic, heart-warming and inspiring film'.