A 40-something bored housewife is left stranded at a bus stop while on holiday and hitchhikes to Venice. An understated bitter-sweet tale of love set in Venice's seamier backwaters, it glows with quirky humour. 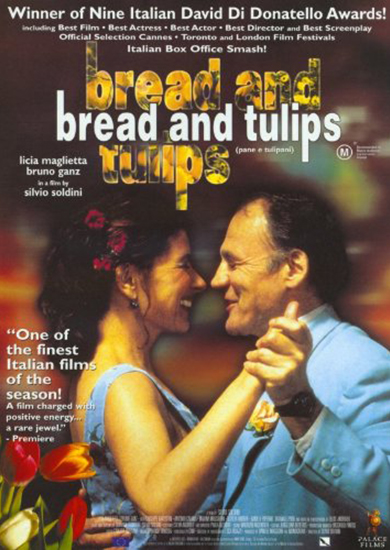 This enjoyably whimsical romantic comedy from Milanese director Silvio Soldini, stars Licia Maglietta as the unfulfilled fortysomething housewife, Rosalba, who falls for a melancholic Icelandic waiter, Renando, during an unexpected sojurn in Venice. With its dream sequences, eccentric supporting characters and bitter-sweet sensibilities, Bread and Tulips, follows its own singular path, while retaining a fairy tale charm. The film explores two very different worlds. Firstly there's the materially comfortable existence left behind by Rosalba and exemplified by her philandering spouse and his bathroom fitting business.

Secondly, there's the bohemian milieu she discovers in Venice, built on artistic creativity, romance and mutual support. It's in this environment that she encounters not only the poetry-loving Fernando, but also an anarchist florist who gives her a job and a holistic masseur who falls for the hapless investigator, sent by her husband to track Rosalba down. There is a warmly appealing central performance for Licia Maglietta, as the woman blossoming in confidence and happiness before our eyes.

When fortyish housewife, Rosalba, is separated from family and friends on a coach tour of Southern Italy, she decides to see Venice just for 24 hours. It becomes more than a break from routine; missing her train home, she's lent a sofa by a friendly but taciturn Icelandic waiter, and the next day, on a whim, she takes a job at an anarchist florist's. Meanwhile, her husband hires a crime fiction crazy plumber to find her. This mid-life romantic comedy benefits from the charisma of Licia Maglietta as the unlikely princess awaiting liberation and Bruno Ganz as her pedantic yet poetic host. It sidesteps too much sentimentality and displays affection for its characters. Old fashioned , a little wayward, improbably likeable.

What you thought about Bread and Tulips

This was an overwhelmingly successful conclusion to the '08/'09 season. You found it 'delicate, delightful and very funny', 'great fun with a witty and literate script', 'a heart-warming story', 'delightful, magical, 100% charming', with 'charming, quirky, understated humour'. The film had 'joy, humour, charm and no slush' and was a 'charming and subversive fairy tale'.

Many of you were captivated by the acting, particularly by Licia Maglietta as Rosalba and Bruno Ganz as Fernando, by the pace and variety in the direction and by the happy ending. There was a strong identification in the responses with Rosalba and her escape from 'commitments' to 'adventure' and 'the delight of leaving behind responsibility for love', and 'finding a new version of herself'.

Many of you enjoyed 'the fantasy of how life can change for the better from the mundane, financially secure boredom, to an uncertain future', and the 'triumph of love and freedom over materialism and possessiveness'. Although there were one or two mild reservations about 'improbability' the audience, as a whole, was caught up in the warmth, humour and pleasure of the film.