A heartfelt denunciation of the plight of widows in pre-independence India. Mehta deftly lays bare the social forces - grinding conservatism and acquiescence - that keep widows in chains. A civilised, empathetic and humane film. 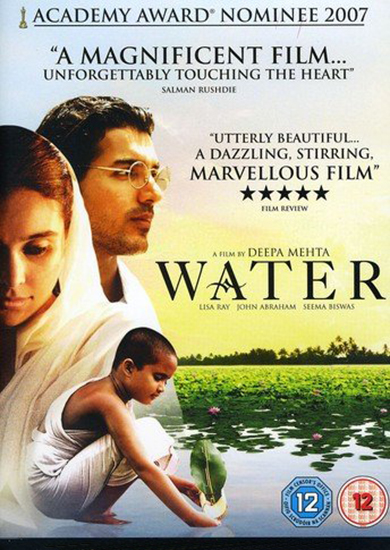 Six years after production originally began, Water, the third element in Deepa Mehta's trilogy, finally makes it onto screen. Undeterred by death threats from Hindu fundamentalists, the courageous filmmaker crafts a subtle study of the mistreatment of widows in pre-independence India. The film centres on Chuya, a seven-year-old widow, whose presence galvanises the co-habitants of a widow's ashram. In 1930's India, even widows as ridiculously young as Chuya are expected to survive in poverty and pay penance for the deaths of their husbands. When Chuya questions her plight, she is met with disdain from all except the devout Shakuntala and Kalyani, a beautiful young widow who is hired out to local gentry to earn income for the house. Kalgani dares to embrace the love of an idealistic lawyer, which has consequences for all. By setting Water against a backdrop of political upheaval at a time when Gandhi is trying to free his country from the British and other oppressions, Mehta adds depth to her film. The predicament of widows as examples of hidden social and injustice, carries a strong emotional punch through the strong and sensitive performances and highlights the issue that still exists, even today, in some parts of India.
Jaspreet Pandohar - BBC Movies Review - 2007
When women outlived their husbands, according to traditional Indian culture, they might as well have died with them. There were three alternatives open to bereaved women: burn on their partner's funeral pyre, marry the younger brother, or live life of self-denial in special homes isolated from the community, forced into begging or prostitution to survive. Such a House of Widows is the setting for Deepa Mehta's quietly powerful film. Mehta introduces her story through the child bride, Chuya, who, when her future spouse dies unexpectedly, is obediently deposited in a House of Widows by her parents. Her presence stirs up feelings amongst several other denizens of the ashram, notably, the domineering matriarch Shakuntala and the beautiful Kalyani. But when Chuya and Kalyani meet the dashing educated revolutionary Narayan, two worlds collide – and the powerless, disenfranchised women are caught in the middle. The story, rendered with fairy tale simplicity, tackles issues of religious intolerance and patriarchal domination, still relevant today, with thoughtful dignity. This film is a brave, impassioned plea for social progress, which is applicable well outside the confines of India.
Leigh Singer - Channel 4 Film - 2007

What you thought about Water

There was warm and enthusiastic praise for Deepa Mehta's 'moving and thought-provoking' film. For many in the audience it was 'desperately sad and shocking' in its picture of elements of life in pre-independence India. It had qualities of depth and emotional intensity, a 'creative blend of music, photography and story to speak up against a terrible social injustice'. The film engaged the audience to great effect: 'an amazing social picture of India in 1938 and today. Strong characterisation, totally involving – heartrending'. It was described as 'powerful, upsetting, poignant, but made me angry'. The capacity for religion to oppress and victimise struck several viewers. 'Such a system! – any religion which can impose such sacrifices is unacceptable', 'heartbreaking – exterminate religion before it fuels further wickedness!' The film was for many viewers, 'captivating, beautifully acted with wonderful photography and excellent music'. 'The haunting music and the astonishing acting of the female cast' were perceived as central factors in the film's powerful and moving impact. Nearly 20% of the responses (8) indicated that this was their best film of the season. The short The Little Terrorist was also very well received.