A true story. At the Sachsenhausen concentration camp, barracks were transformed into Nazi counterfeiting workshops. Prisoners had a choice. If they cooperated they might survive. If they sabotaged the operation death was assured. Academy Award winner: Best Foreign Language Film 2008. 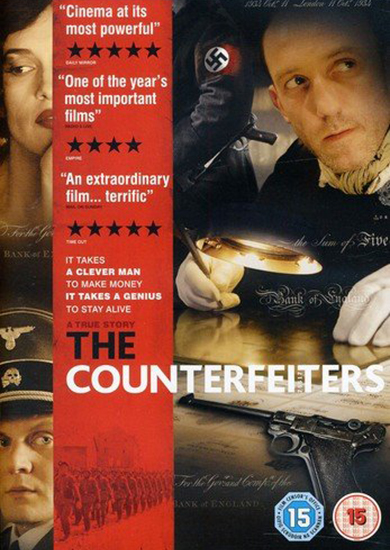 The idea of 'surviviing' the Holocaust takes on many nuances in Stefan Ruzowitsky's stark and intriguing evocation of a largely unknown area of Second World War history: the use of skilled prisoners to create counterfeit currency to flood the British and American economies with fake cash. Salomon Sovowitsch, a successful Jewish forger is arrested and soon he is transferred to 'the golden cage', a hothouse of industry where ex-bankers and criminals collude in producing dodgy notes in an atmosphere of relative comfort. The film's core dilemma emerges when they are on the verge of cracking the dollar. The film has some curious and daring psychologies. Ruzowitsky is aware that not all moral standards can survive the perversity of the Holocaust. He directs with urgency, dousing his film in a colour palette that takes its cue from the grey stripes of the prisoner's uniforms. His meshing of plot with debate is impressive; a clever and compelling film.
Time Out - October 2007
'The Counterfeiters tells the true story of a brilliant Jewish artist who manages to survive the gas chambers during World War 2. His name is Salomon Sorowitsch and his medium is the banknote. The forgery of enemy currency was a massive operation in the late years of the Reich and who better than Jews to do it? Forgers working out of Sachsen hausen printed more than £130 million in sterling and cracked the dollar too, before liberation. The operation was based on a precarious collaboration - a pretence of amicability - between the Jews and their captors. The SS Officer in charge of the operation is not an evil figure, but a pragmatist and a businessman, who is fully aware of the thin line between keeping the prisoners under his thumb and allowing mutiny to bubble up. This thoughtful and imaginative film sets up an argument about the moral tenability of the forgers' position, properly fed and clothed in a gilded cage while the Nazi's other victims meet unspeakable ends mere metres away.
Daily Telegraph - October 2007

What you thought about The Counterfeiters

Stefan Ruzowitstky's The Counterfeiters, was a starkly compelling and powerful film and received very high praise in your responses - 76% excellent is the highest figure so far this season. You found the film 'amazing, gripping, such hardship, horror and brutality', 'a poignant story of human nature', 'a brilliant study of moral dilemmas and survivor guilt'. Many responses appreciated the tight acting and scripting, the excellent casting and dramatic pace, the complexity of relationships and the understanding with which they were portrayed, and the impact of the almost monochrome colour. There was also a strong sense of moral involvement: 'made me feel unsettled and uncomfortable - what would I have done?'. 'Disturbing - what would any of us have done in that situation?'. 'A haunting dilemma - principles or survival', 'greed and cowardice versus decency and loyalty - where would we have stood?', 'the brave did survive - who am I to judge the morality?' There were a few dissenting voices who found the issues absorbing but the characterisation superficial, the ending a bit easy and the 'female interest' unnecessary. But the overwhelming tenor of the responses was summed up in one: 'Brilliant clarity, pacing, acting, direction, atmosphere, music! Faultless!'