The Assassination of Jesse James by the Coward Robert Ford

Brad Pitt and Casey Affleck star as the victim and killer in this 21st c. take on the great 19th c. American myth. Outstanding performances, sumptuous landscapes and a beautiful score. 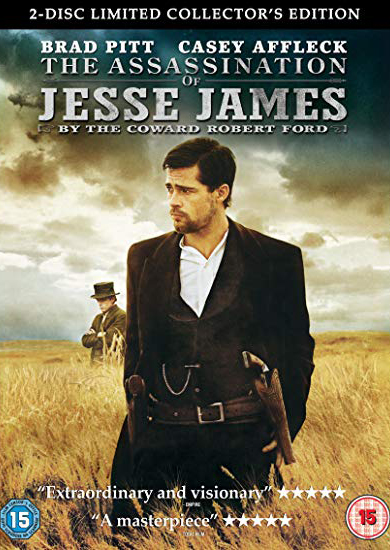 In the cold light of day, legendary outlaw, Jesse James is exposed as a low-down killer who had it coming. But as much as writer/director Andrew Dominikreveals the pettiness of men, the film is also a sepia-toned love letter to the art of mythmaking. All the world needs a hero and there is no one better than Brad Pitt to fill those boots. Of course, where there's a hero there must be a villain and Casey Affleck exudes all the sweaty desperation of a wannabe pop idol in the role. As the media's reputed Robin Hood of the Old West, haunted by his own celebrity, Pitt is at one remove, enigmatic, unpredictable and thoroughly engaging. At times he looks like a ghost amongst the living, drifting across majestic landscapes and lurking in the shadows for those who might betray him.
BBC Film Review - 2007
It's 1881 and when Brad Pitt swaggers into view dressed from head-to-toe in black, we know we are in the presence of a member of the James gang, one of America's most ambivalent myths. "When Jesse walks by, even the rain falls slower", says the narrator. Even Jesse's brother Frank is wary of the younger sibling's chilly charisma. There is an unstable side to Jesse that doesn't mix with the southern manners; immaculate outfit, neat beard, or the secret church-going wife and two kids. The baleful blue eyes are too hard, the belly laughs are too hollow. One of his frightened cronies pleads with Jesse not to put a bullet in a railway guard's skull. "Don't ever tell me what I can or can't do" says Jesse mildly. It's the icy civility mixed with raging moments, that makes Pitt's 34 year-old outlaw such a magnetic villain. The brilliant irony of Andrew Dominik's film is that Jesse James is a man who is balled and chained by his own infamy. The Assassination of Jesse James is an unnerving film because the hypocrisy runs deep. James is a front page icon in every five cent scandal sheet, yet the most hated man in America.
The Times - September 2007

There was a wider range in the responses to the film than there has been to other films this season. There were plenty of qualities to be found: 'long, slow, thoughtful, reflective', 'an epic film - figures in a landscape moving to a pre-destined end', 'gripping and moving', 'a deliberate and considered study of fame'. There was praise for the emotions of fear and guilt, the realistic treatment of a popular hero, the atmosphere created through the landscapes, the build up of tension, the excellent photography, the sensitive effective use of colour and the accompanying music. The acting was praised in many responses, but not all, with an appreciation of the depth and originality of characterisation. Many who liked the film and found it powerfully atmospheric criticised its length, however and it was this feature which drew many negative responses, together with the lack of dramatic pace. 'Atmospheric but over long', 'overblown and overlong', 'far too long - and aimless for the first hour', 'too long - boring', 'very slow', 'far too long for too little story'. There were criticisms also of the difficulty of understanding some of the dialogue because of the American accents, 'too difficult for Surrey ears'. One or two responses suggested that the film needed subtitles. There were also difficulties with the sound in general for this film with several comments that it was 'difficult', 'muffled' and lacked the dramatic clarity to keep events moving.